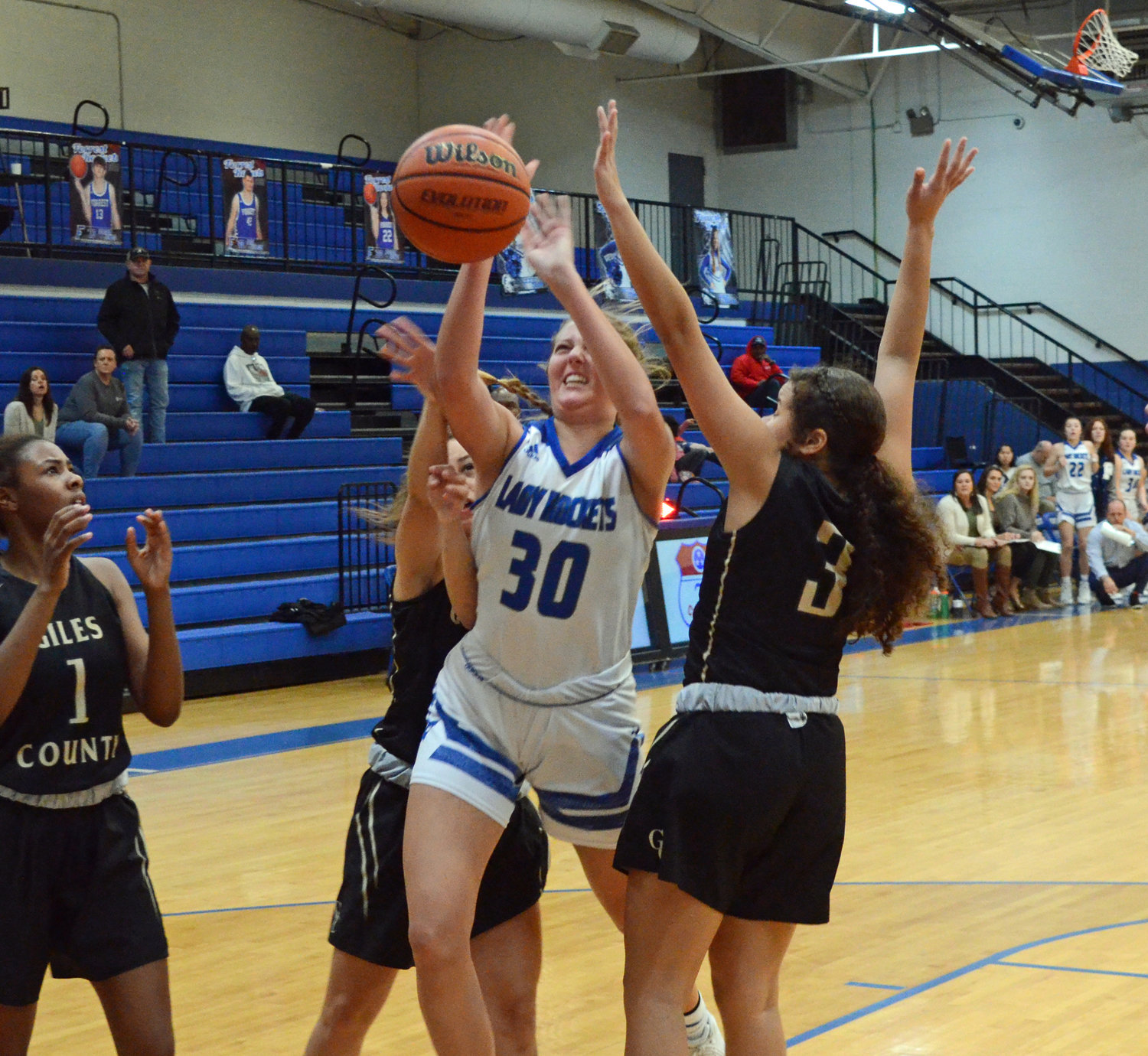 Senior Ryann Lewis (30), who scored a career-high 14 points, takes the ball strong to the hoop versus the Lady Bobcats Friday night at Chapel Hill.
Tribune photos by Anthony S. Puca 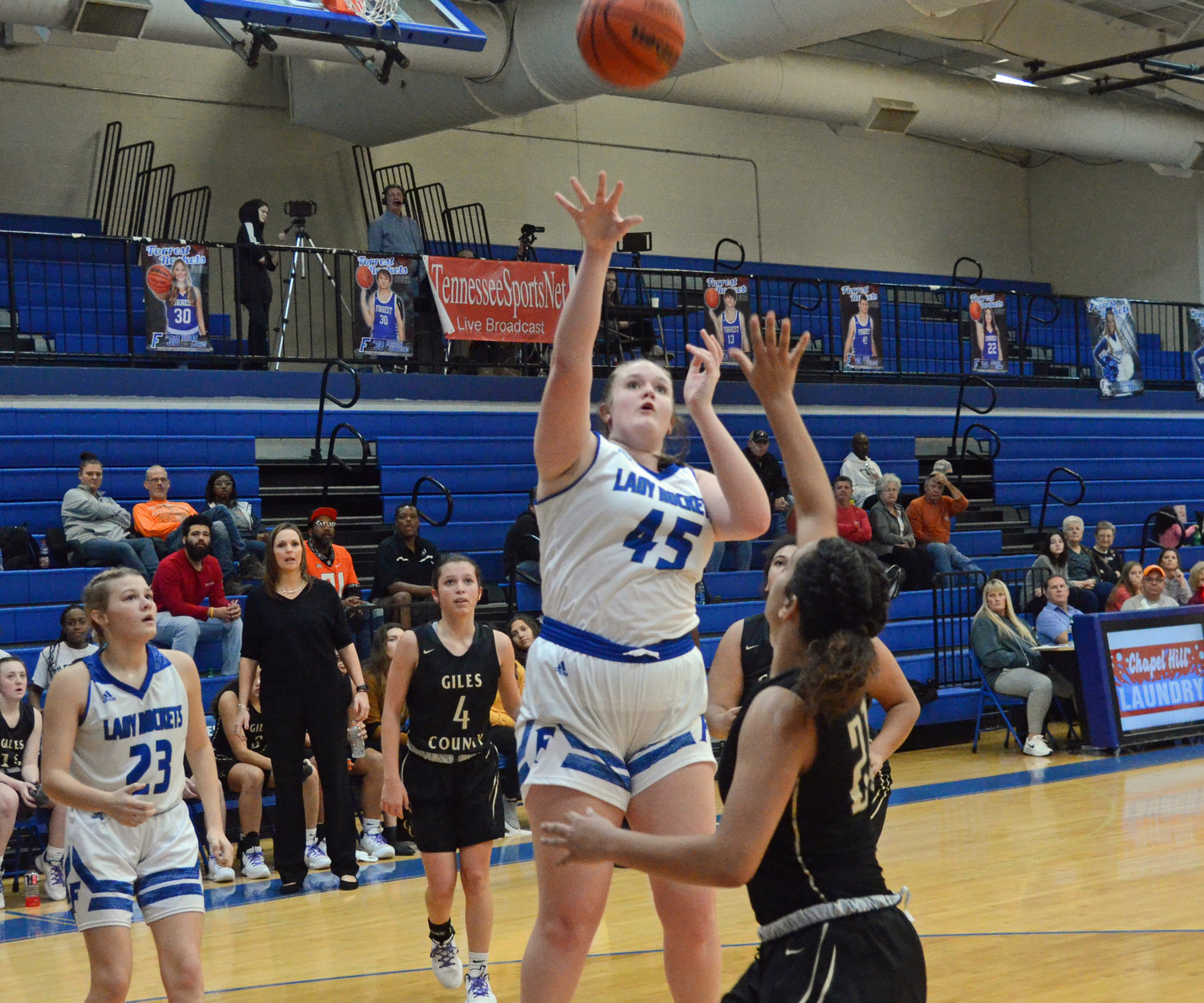 Cadence Chapman (45) scores two of her 10 points in the game for the Lady Rockets, who beat Giles County in a 55-37 coast-to-coast win. 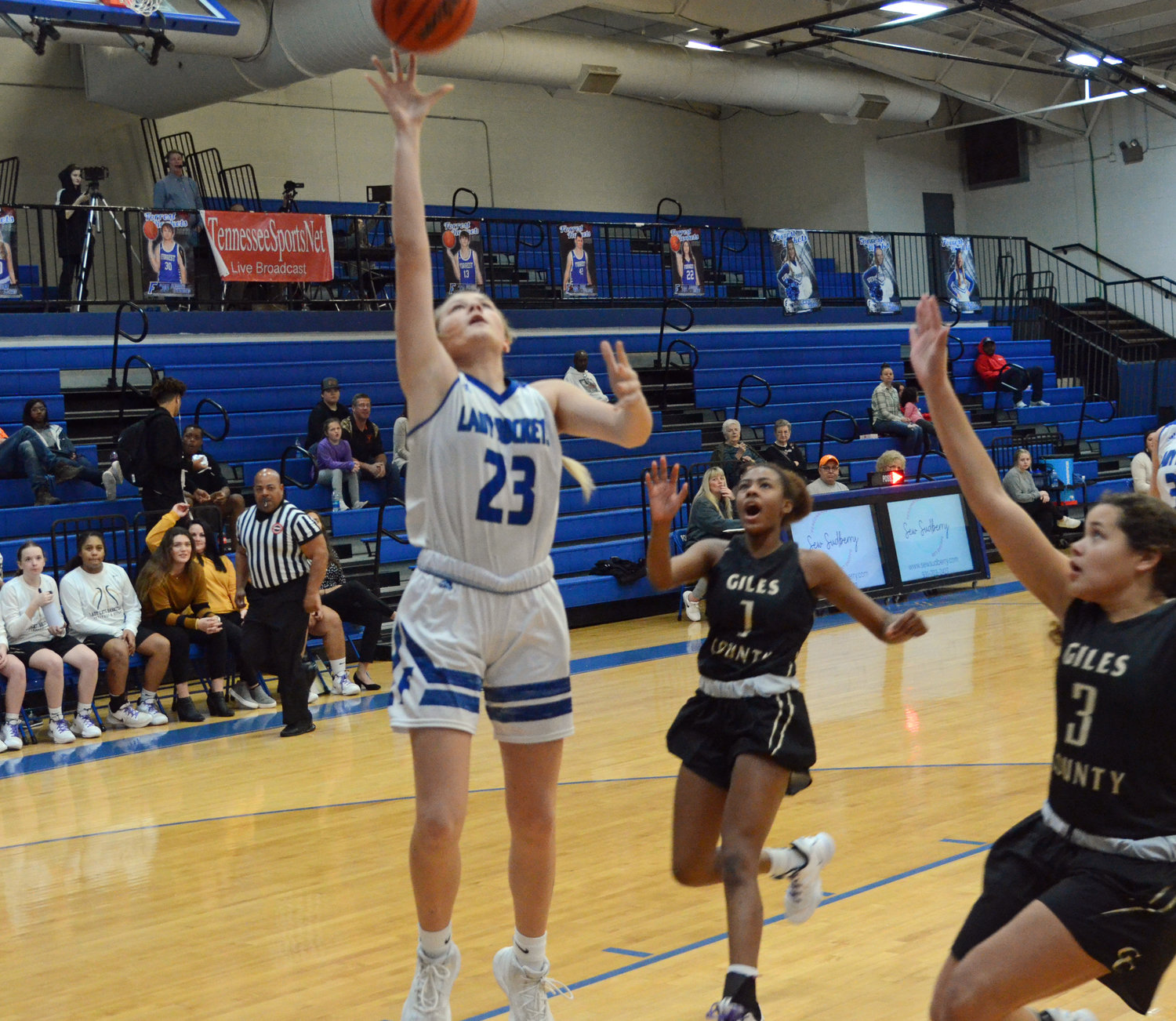 The Forrest Lady Rockets came into Friday night’s game at Chapel Hill versus Giles County mired in a six-game losing streak and had lost two in a row to the Lady Bobcats.

Firing from all cylinders, the Lady Rockets roared off the launch pad with a huge 23-2 first quarter and never looked back in a 55-37 coast-to-coast win.

Forrest had four players score in double figures with senior Ryann Lewis leading the way with a career high 14 points, five blocked shots, and a stellar 4-for-7 effort from the free throw line.

Macyn Kirby had 12 points, knocked down a 3-pointer, and made the only free throw she attempted in the game.

Megan Mealer and Cadence Chapman had 10 points apiece with Mealer banging home a 3-pointer and going 1-for-2 from the charity stripe while Chapman blocked three Giles County shots.

Kinslee Inlow had five points and a 3-pointer and Addison Bunty and Karli Warner had two points apiece.

Bunty stole the ball on Giles County’s first offensive possession of the game and fed Inlow for a bucket and Forrest was off and running as they scored 15 unanswered points before Kiya Gibson scored for Giles County with 58.8 seconds remaining in the first quarter.

Kirby answered with a 3-pointer and after a Lady Bobcats’ missed field goal, Inlow drained a long bomb at the buzzer and the Lady Rockets led by 21 points.

Giles County scored the first six points in the second quarter and went to outscore the Lady Rockets 17-9 behind all 10 of Ari Howard’s points in the game to trail 32-19 at the half.

Chapman scored on a low post bucket to start the second half and after a Giles County miss, Kirby found Mealer to make it a 36-19 contest.

The Lady Bobcats scored and on their next offensive possession, Lewis came up with a blocked shot and was rewarded with a bucket at the other end as Forrest doubled up the score at 38-19.

Once again, the Lady Bobcats put together a nice run and outscored Forrest 10-2 for the remainder of the third quarter and trailed by 12 points at 41-29, entering the fourth period.

Lewis rallied Forrest with back-to-back buckets in the paint to start the final stanza and she scored four more down the stretch as the Lady Rockets finished off the win and put a halt to the losing streak.

Unfortunately, there would be no winning streak as Forrest travelled to Huntland for a matinee on Saturday and lost 47-39 to the Lady Hornets.

The Lady Rockets (3-7) have a few days off before travelling to the Richland Christmas Tournament next week when they take on the Lady Raiders on Tuesday, December 28 at 6 p.m.