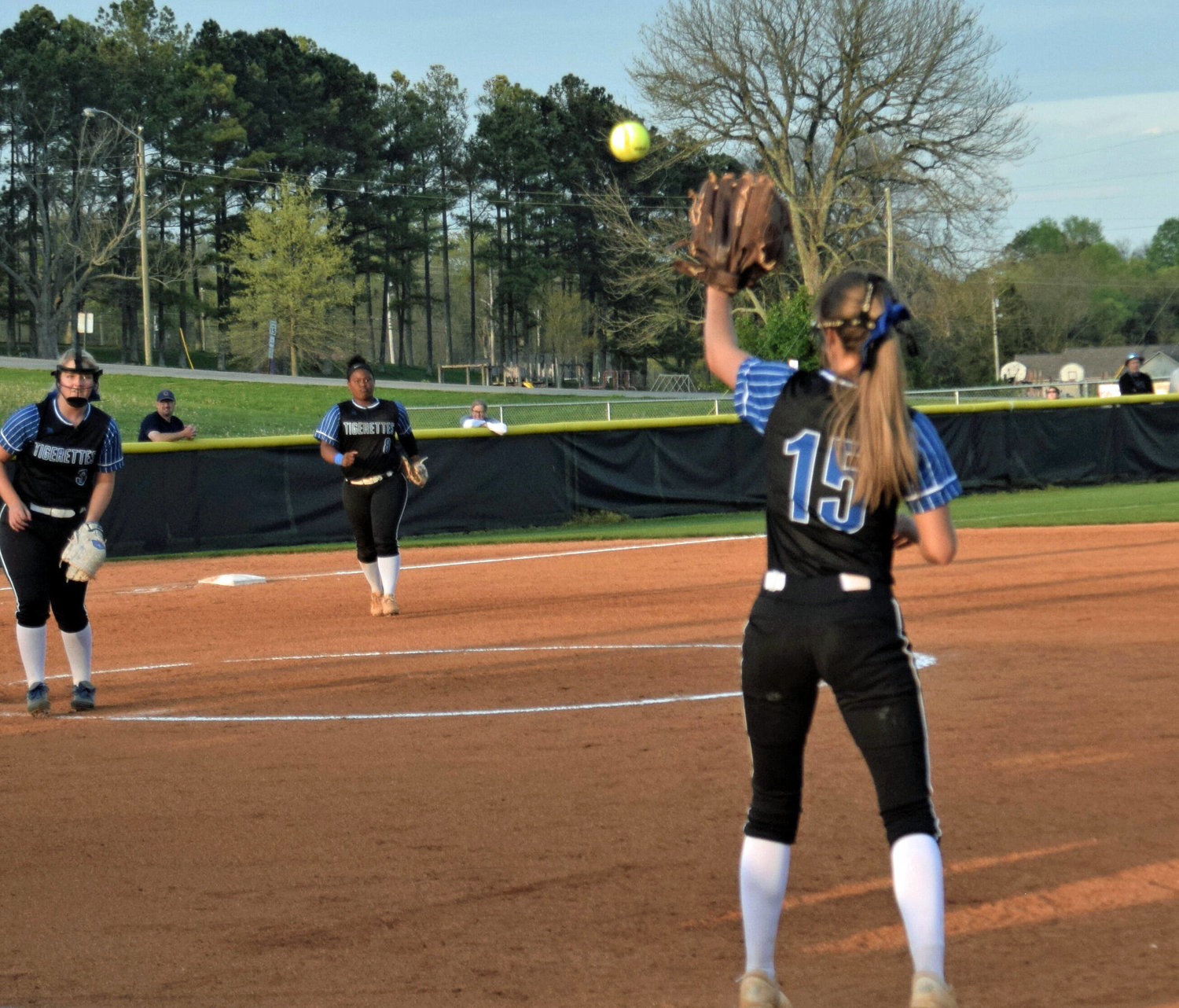 Marshall County first baseman Abby McGehee (15) makes the play for the Tigerettes in their 6-0 loss to Nolensville Monday night at Reese Hambrick Field in Lewisburg.
Tribune photos by Dennis Holley 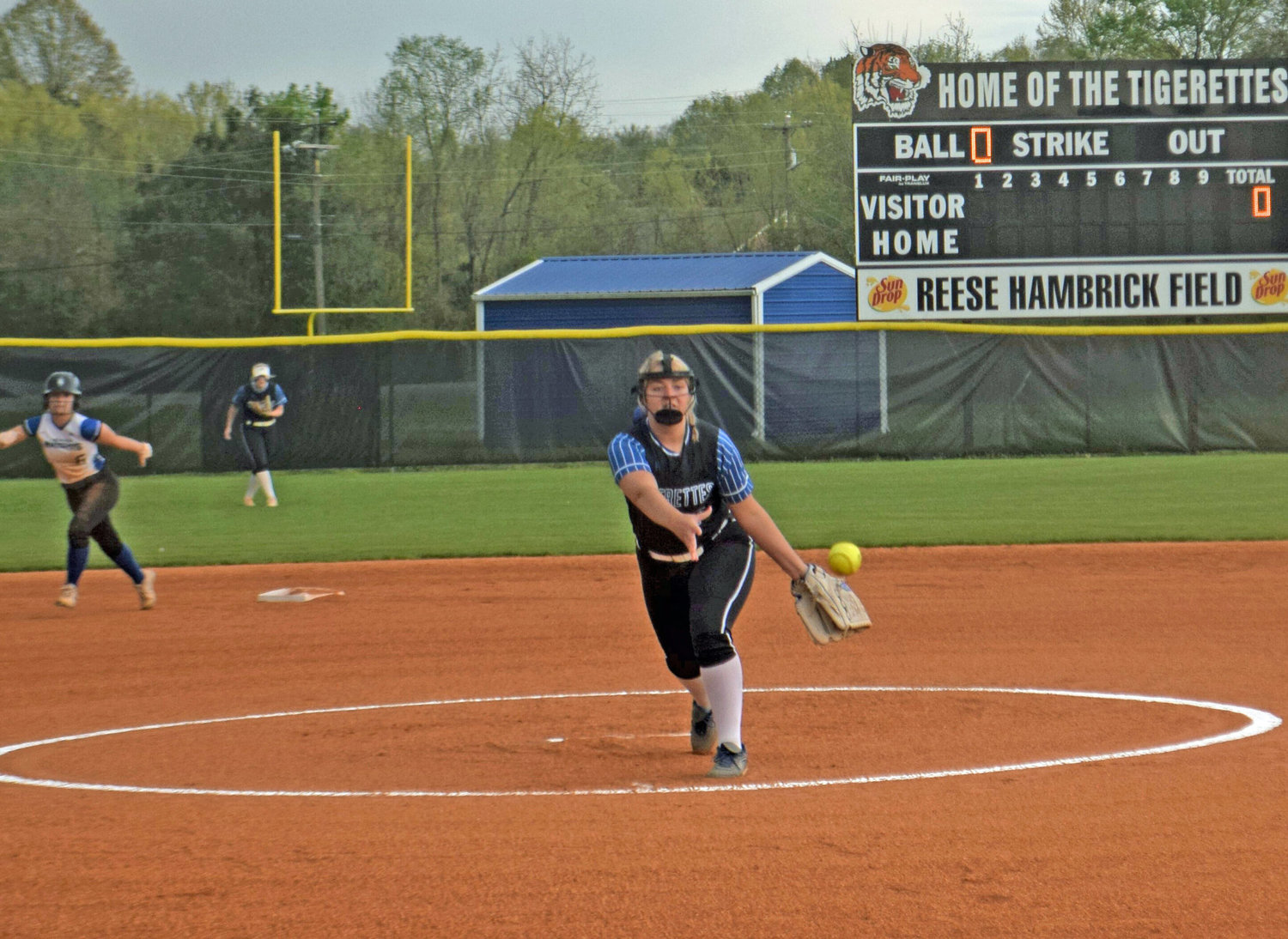 Taylor Pickle (3) hurls the first pitch of the game for the Tigerettes. 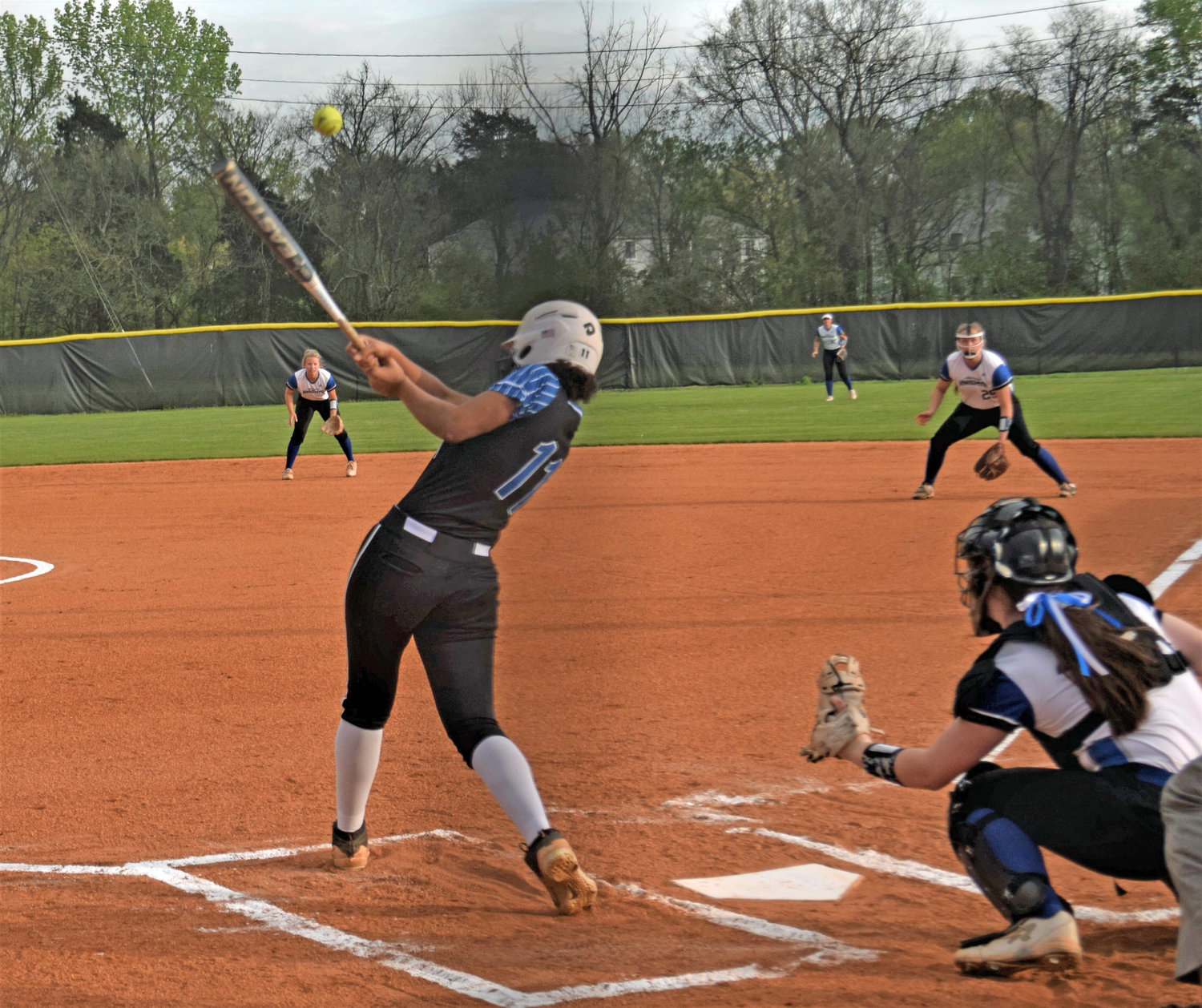 Demiyah Blackman (11) had one of the four hits in the game for MCHS. 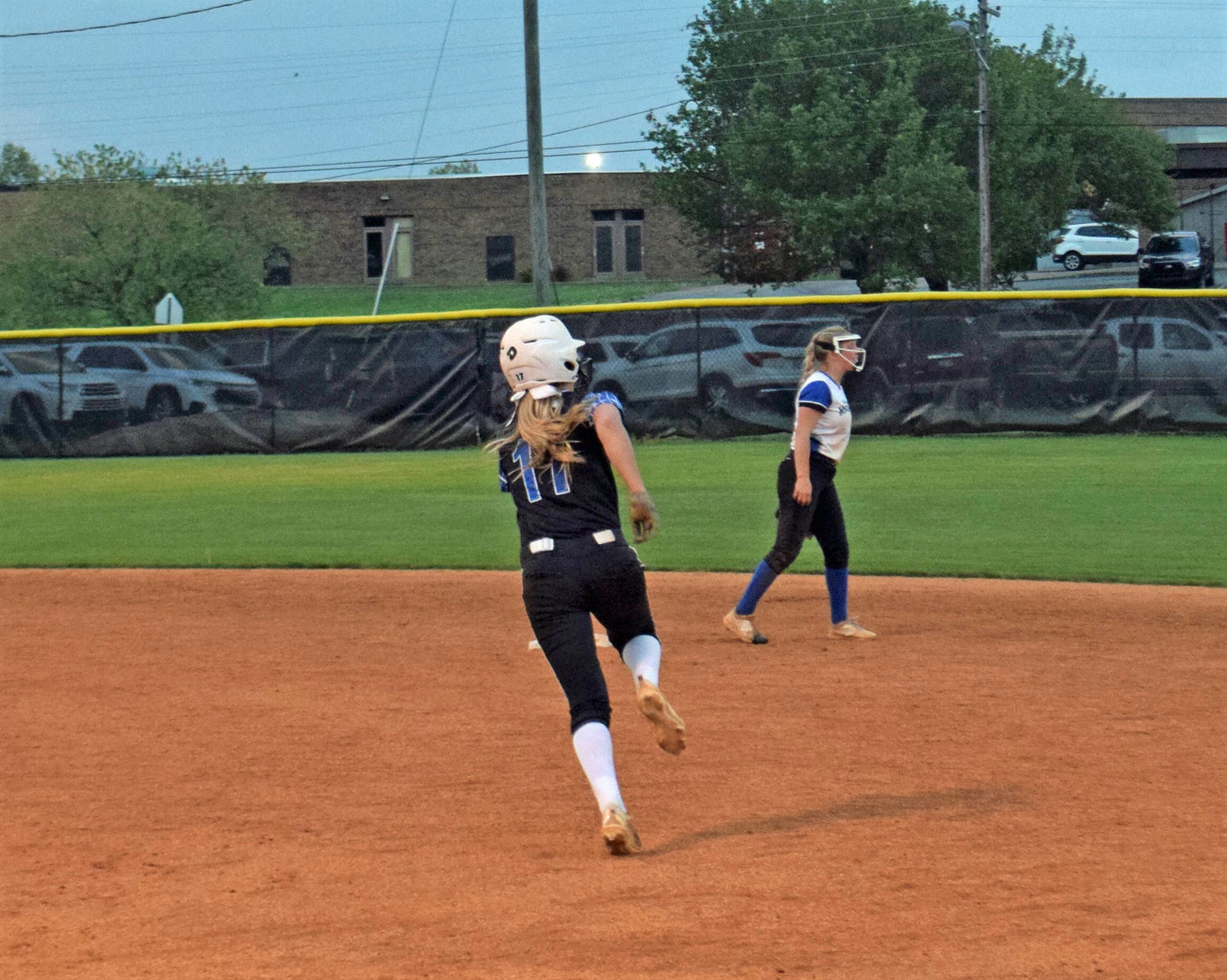 Tatum Garrett (17) heads for second base with a double in the bottom of the seventh inning.
Previous Next
Posted Wednesday, April 14, 2021 11:00 pm
Dennis Holley Tribune Correspondent

The sun shined briefly as the Nolensville Lady Knights rolled into Reese Hambrick Field in Lewisburg riding a three-game winning streak for a District 12-AA Tuesday night matchup with the Tigerettes.

Marshall County, sporting a four-game winning streak, saw that go by the wayside as Lady Knights’ hurler Rylan Smith tossed a four-hit shutout to power Nolensville to a 6-0 win.

Smith, with a blazing fastball and off-speed breaking pitches, struck out eight Tigerettes and only walked two for the complete game blanking.

The Lady Knights (9-5, 3-1) got things going in the top of the first when Macy Dupree led off with a single to right field.

Dupree stole second base, then on a delayed steal reached third before scoring the games’ first run when Lexi Hall singled up the middle.

In the bottom of the first inning after one out, the Tigerettes got a single from Madison Hery, who advanced to second base on a Smith wild pitch and reached third on a passed ball.

Smith bore down and struck out the next two batters to end the inning.

Taylor Pickle was in the circle for the Tigerettes and she shut down the Lady Knights in order in the top of the second inning on some great breaking balls.

“My curve ball was good, they kept fouling the outside ball off and my screw ball made them hit it off the bat handle,” Pickle said.

In the bottom of the second inning, Haylee Hobby drew a walk, but she was stranded as Smith’s fastball was too much for the Marshall County hitters to catch up with as she struck out two batters in a row to end the inning.

The Lady Knights padded their lead in the top of the third inning as Dupree and Avery Patton nailed back-to-back a one-out singles before Paige Dickinson dribbled a ball to Pickle, who fired to Kaniyah Taylor at third base to cut down Dupree, but a wild throw in an attempt to nab Patton at second base sailed in to right field, allowing Patton to score and Dickinson moved up to third.

Lexi Hall drove in Dickinson with a single and Nolensville led 3-0.

The Tigerettes fought back in the bottom of the third inning as two Lady Knights’ errors put Tatum Garrett and Hery on base.

Taylor walked to load the bases, but again Smith bore down and struck out Pickle to end the inning.

Smith and Pickle threw goose eggs for the fourth, fifth, and sixth innings.

In the bottom of the sixth with two outs, the Tigerettes put runners on second and third as Taylor got aboard on an error and Lancaster doubled to the fence.

Smith denied the Tigerettes once more as she struck out Hobby to end the inning.

The top of the seventh saw Nolensville put the game away, scoring three runs on a Dupree triple, an RBI sacrifice fly by Patton, and a Lexi Hall single.

The Tigerettes fought back in the bottom of the seventh as Garrett doubled with one out.

Demiyah Blackman singled to send Garrett to third with Blackman taking second base on the throw home.

With runners on second and third, Hery was called out attempting to bunt as she was ruled out of the batter’s box when contact with the ball was made.

Smith, as she had done all game long, rose to the occasion and struck out Ellie Luce to end the ball game.

“It was a tough loss, Smith is one of the toughest pitchers we’ve faced,” MCHS coach Bailey Taylor said. “I am proud of the team, we had a couple of mental lapses, but they made good plays on hard hit balls hit right at them.”

“When they scored in the seventh, I could see our moral drop because we knew we only had one more shot at them. We didn’t capitalize when we had opportunities.”

The Tigerettes (8-7, 3-2) entertain Giles County (3-3, 3-2) for another district tilt on Thursday and then travel to Fayetteville for the Lincoln County Border Battle this weekend.