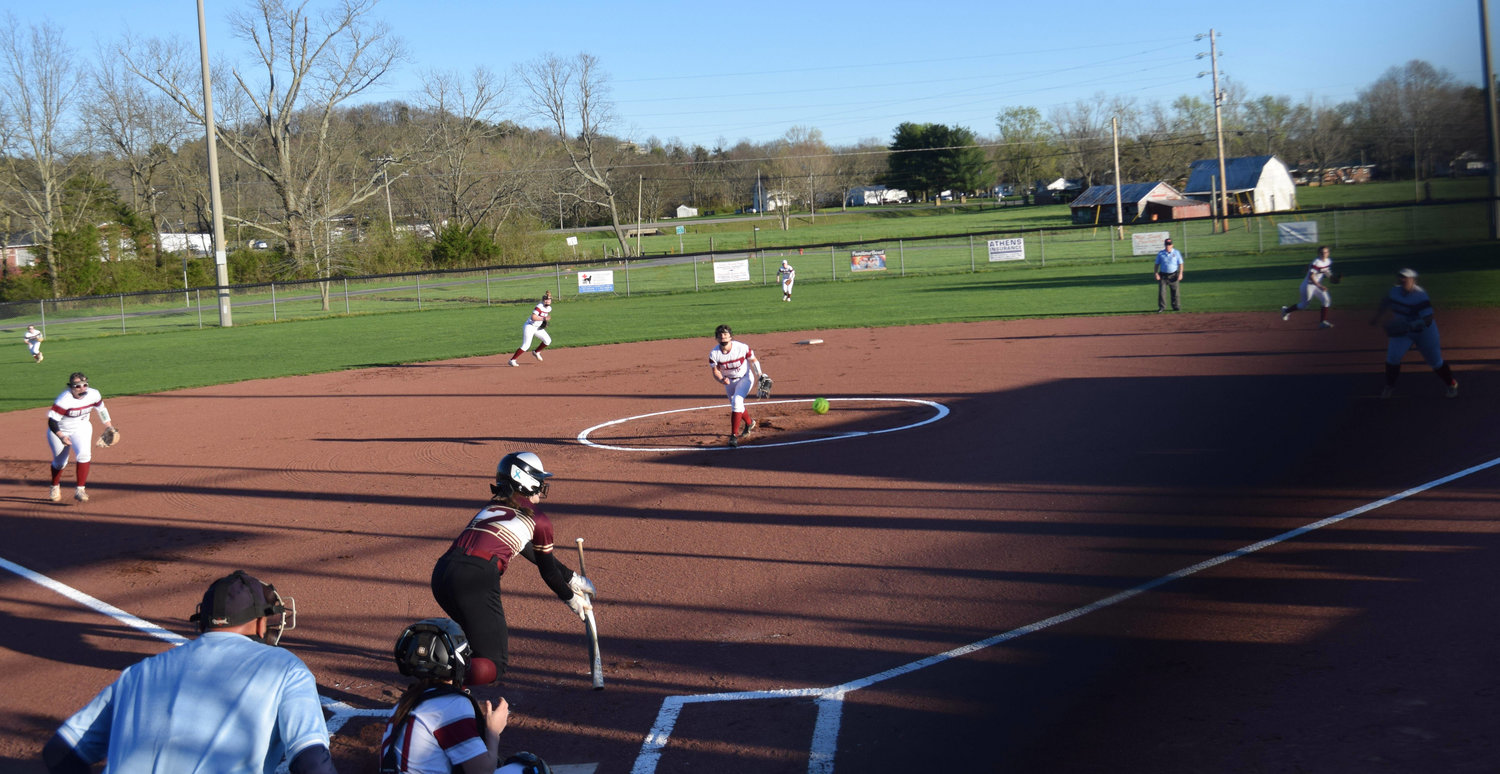 The Cornersville defense gets ready to make a play on a dribbler by Gracie Travis.
Tribune photos by Dennis Holley 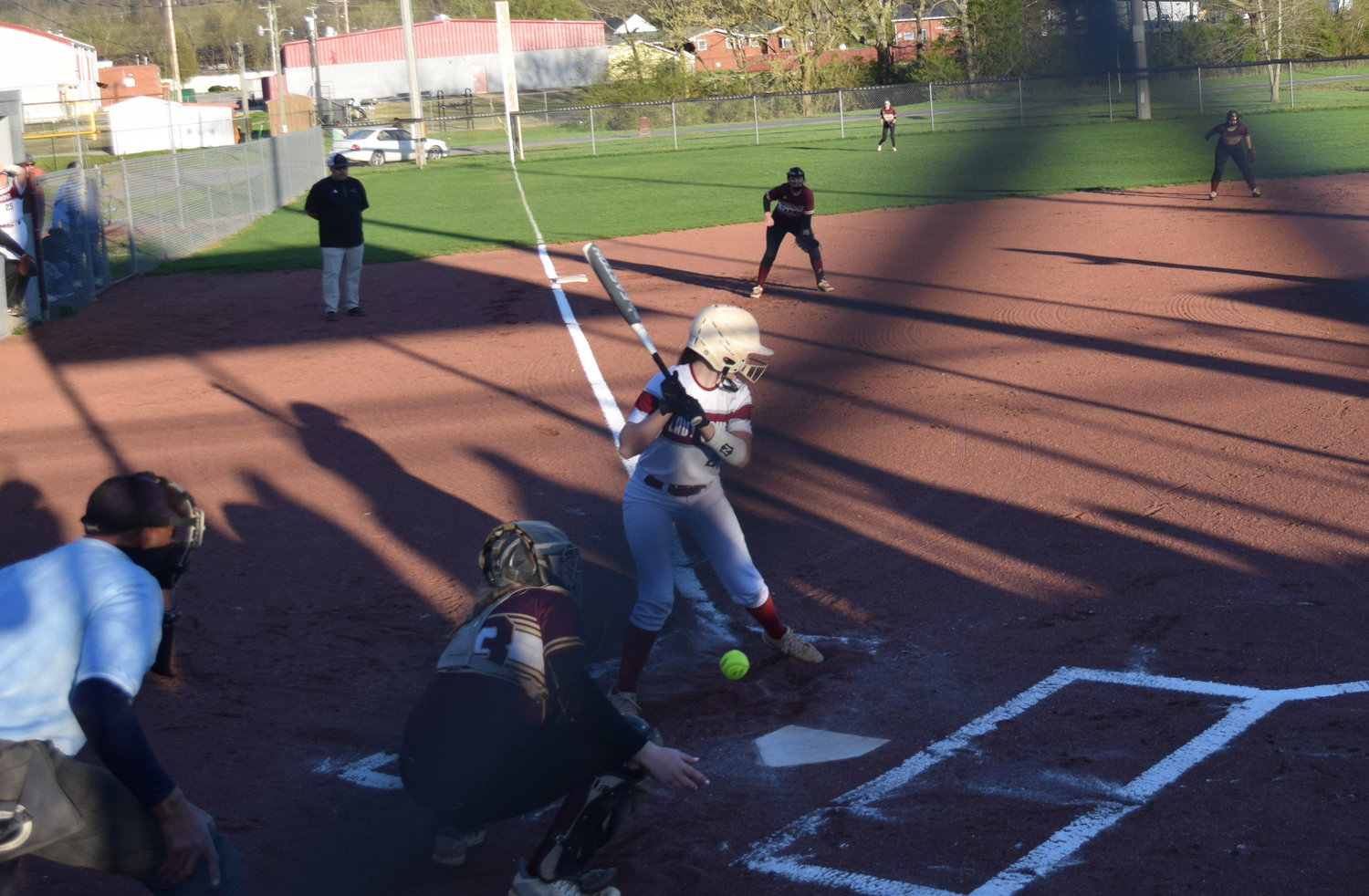 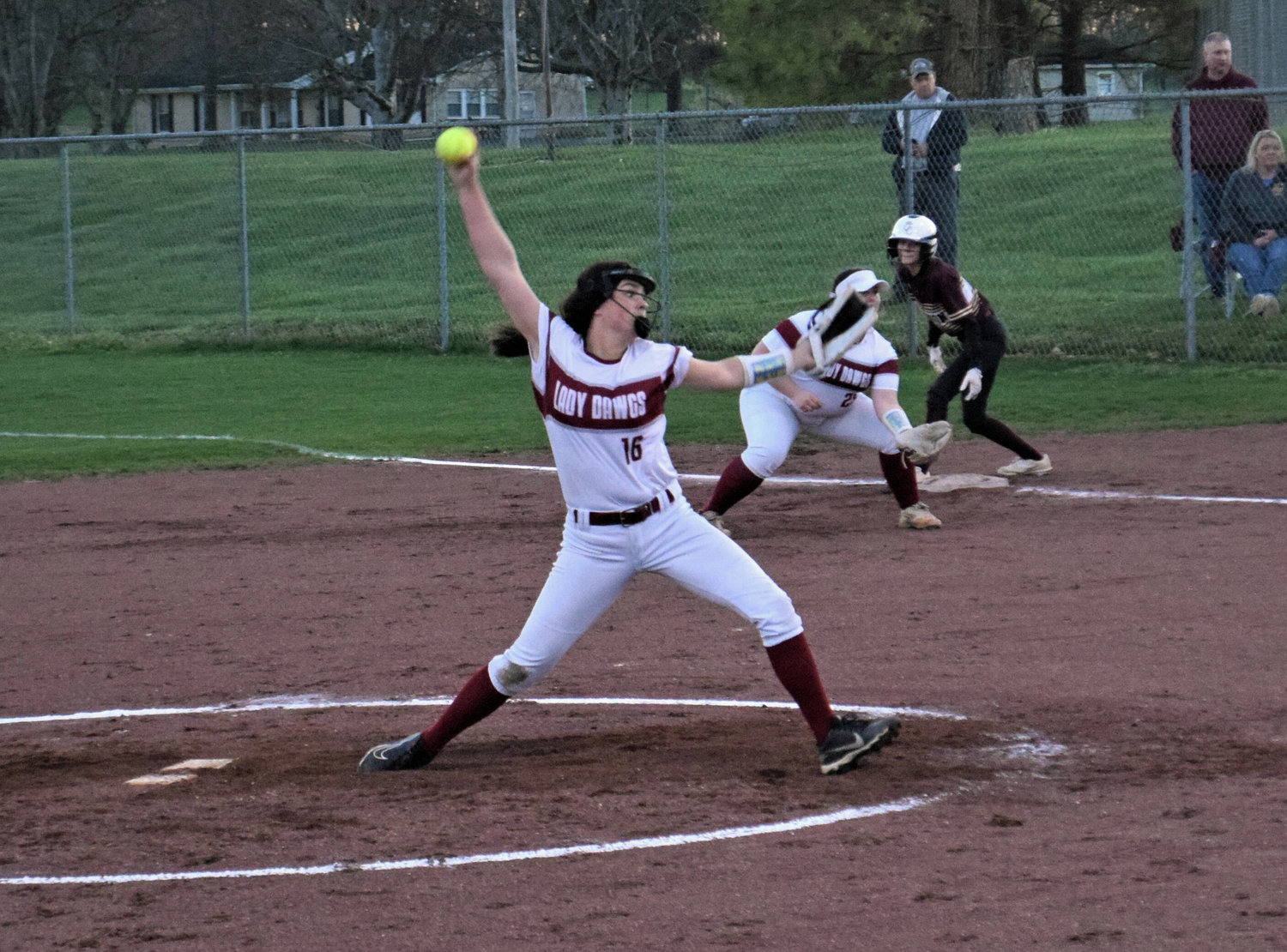 The Lady Bulldogs hitters blistered the Lionettes for 13 hits and 11 runs and got solid pitching from Carmen Ward for a four-inning 11-0 shutout win.

Aleia Childress slammed a home run and a double, Ward slammed a double, and Molly Wells drove in three runs to lead the Lady Bulldogs on offense.

Maddie Arnold led off the game for the Lionettes and reached first on a Lady Bulldogs’ error before Josie Gannon doubled Arnold to third and Cannon County had two runners in scoring position with no outs.

Katelyn Duggin walked to load the bases, but Ward then bore down, striking out Ashlee Hill and Addy Todd.

Arnold was caught trying to steal home on the strike out of Todd and the Lady Bulldogs got out of a bases loaded jam.

“It was exciting to see that we got out of the first inning jam without giving up a run,” Polk said. “We are learning that this team has got a lot of grit.”

The Lady Bulldogs responded in the bottom of the first inning as they loaded the bases, beginning with a leadoff hit by pitch on Hannah Moore.

Kayli Childress followed with a solid single to left field and Alicia Polk did the same to load them up for Cornersville.

Wells delivered one run as she flied out to center field, scoring Moore.

Abbie Woodard beat out a slow roller to re-load the bases and Ward helped her own cause by doubling in Childress and Polk to make the score 3-0 at the end of one inning.

The bottom of the second inning saw the bats of the Lady Bulldogs come alive even more than they did in the first inning.

Aleia Childress led off with a smash down the left field line that cleared the fence to put the Lady Bulldogs up 4-0.

Moore was plunked for the second time, Jayli Childress got on via a Lionettes’ error and Polk walked to load the bases for Cornersville.

Wells cleared the base paths with a stinging single that rolled through to the outfield, talking second on the throw home and Cornersville led 7-0.

Duke singled, but Wells was cut down out home for the second out of the inning.

Ward helping her cause again, lofting a fly ball to deep short that was misplayed by Cannon County and Duke scored to make it 8-0.

Aleia Childress, up for the second time in the inning, drilled a single to center and Ward scooted home for a 9-0 lead.

The top of the third saw the Lady Bulldogs throw some leather at the Lionettes as Aleena Gladden led off with a walk before Arnold slapped a ball to Cornersville second baseman Duke, who flipped the to shortstop Polk on the second base bag, who fired the ball to first baseman Childress for a perfectly executed 4-6-3 double play.

The bottom of the fourth inning saw the Lady Bulldogs put the icing on the cake as they scored two runs on a Aleia Childress two-run double and the Lady Bulldogs had their victory 11-0, thanks to the 10-run mercy rule.

“I have felt more relaxed and confident this season. I have calmed down at the plate,” Childress said this about her splendid night at the plate.

Ward after the bit of trouble in the first inning bore down and allowed only one hit after that.

“My curve ball and change-up were good tonight,” Ward said.

The Lady Bulldogs make the long trek to Huntland for a District 8-A game against the Lady Hornets on Tuesday night.