Lady Bulldogs come up with tough road win at Shelbyville 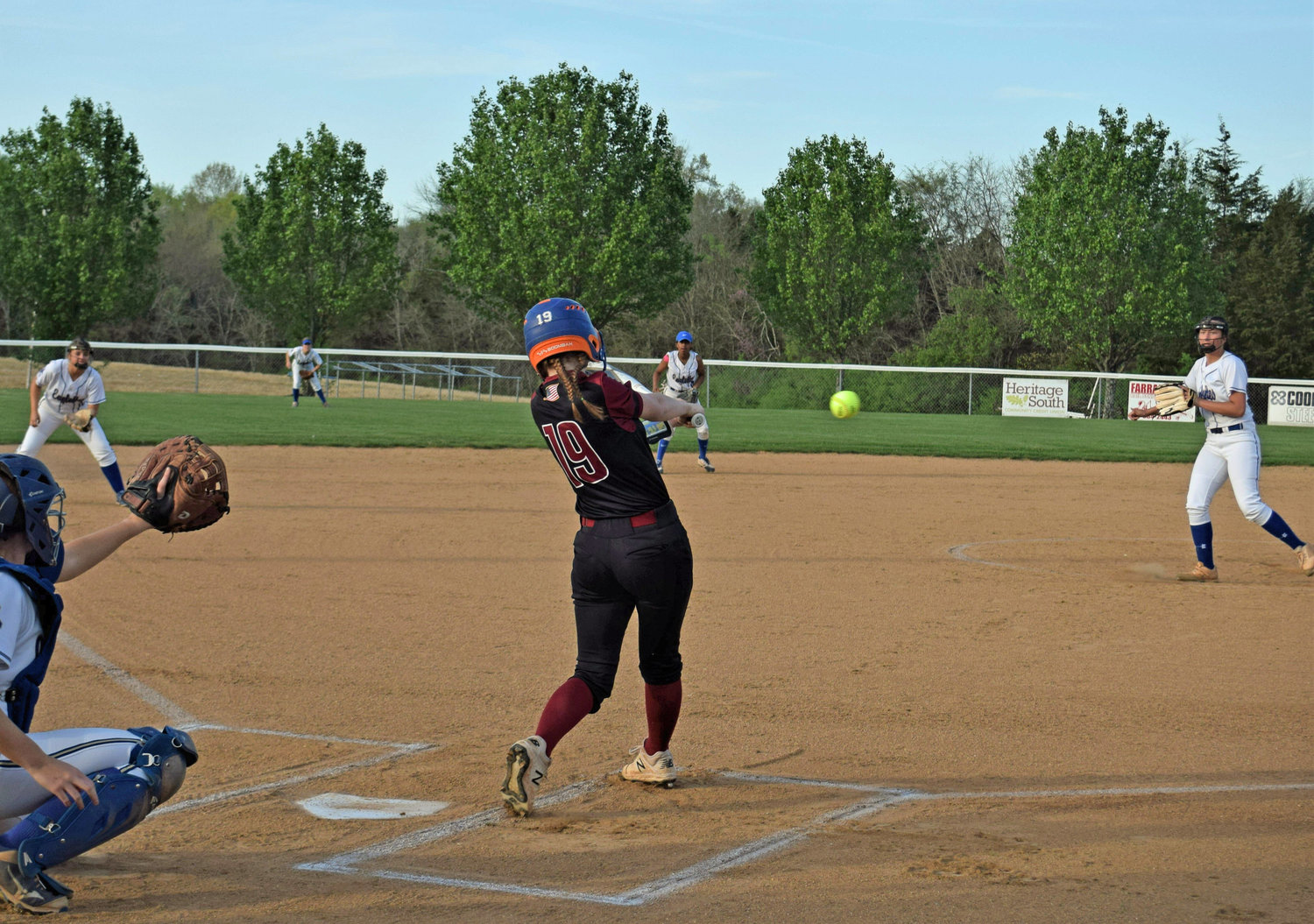 Anna Wood (19) was 5-for-5 at the plate for the Lady Bulldogs, who moved to 9-8 on the season.
Tribune photos by Dennis Holley 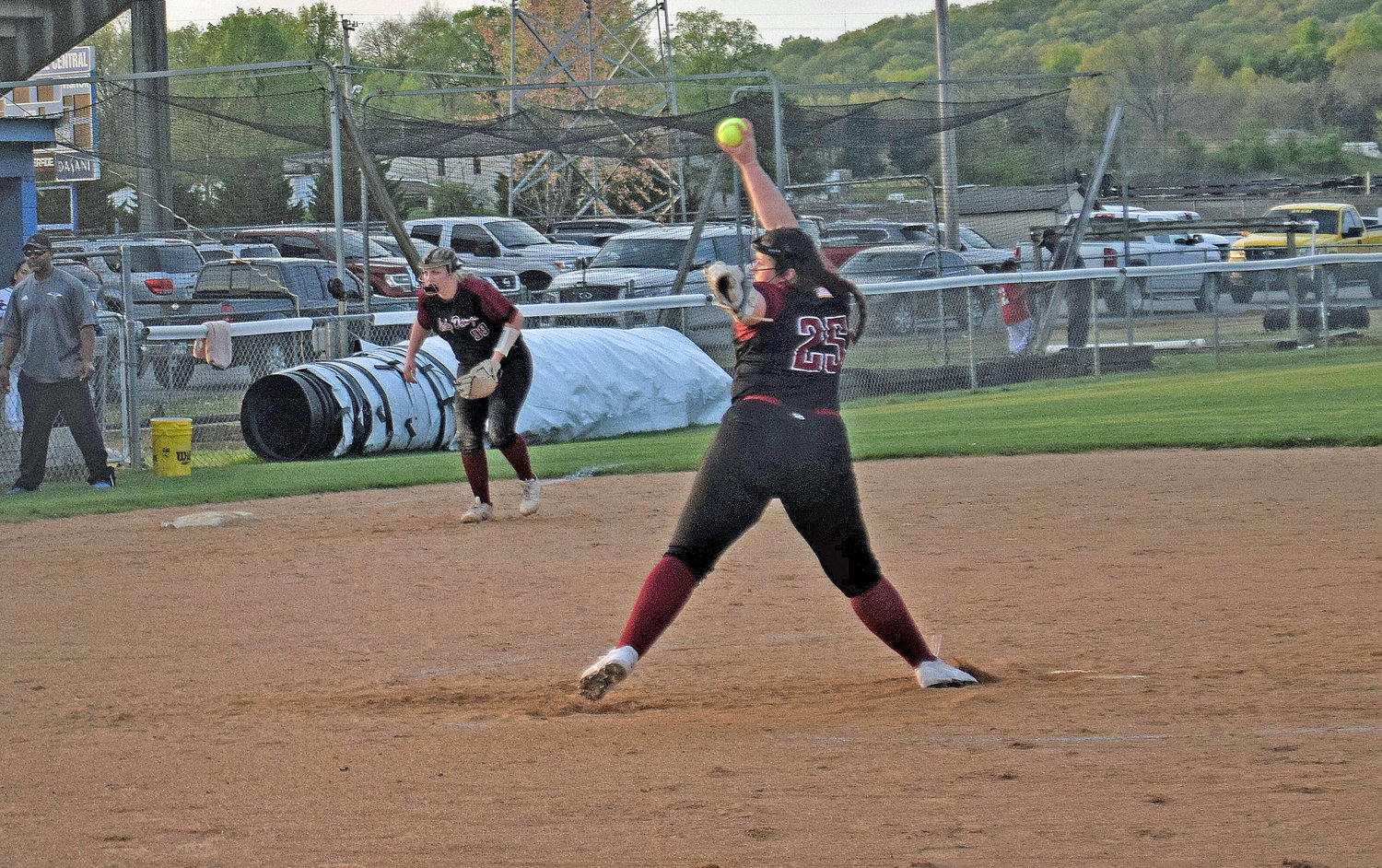 Aleia Childress (25), who picked up the win in the circle for Cornersville, hurls a pitch to the plate. 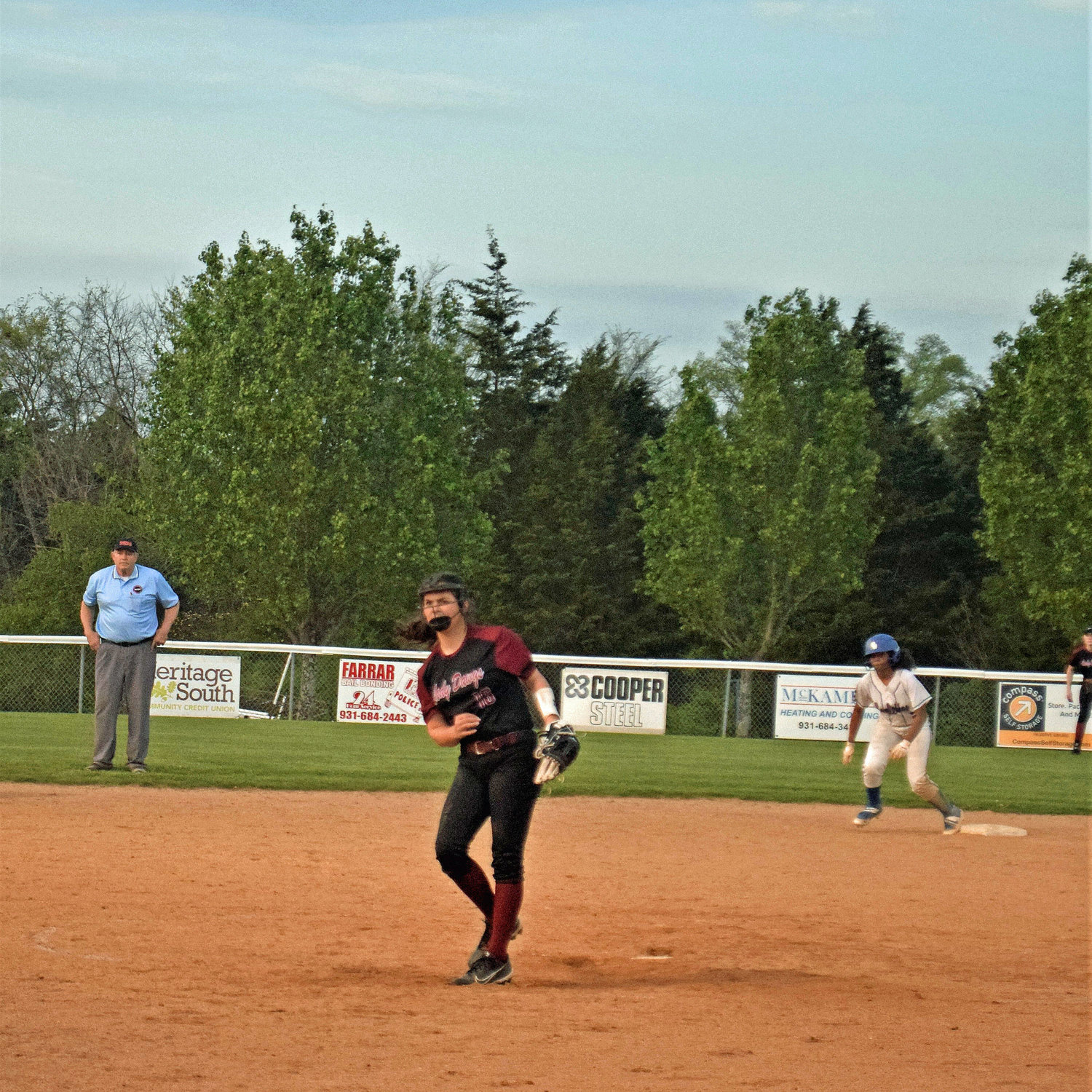 Carmen Ward (16) came on in relief for Aleia Childress and got the save for the Lady Bulldogs as they beat Shelbyville 8-6 on the road Monday night.
Previous Next
Posted Wednesday, April 14, 2021 11:00 pm
Dennis Holley Tribune Correspondent

The Cornersville Lady Bulldogs (9-8, 2-2) made the trip to the Walking Horse capital of the world in Shelbyville to take on the Eaglettes (2-6) for a non-district softball game on a pleasant Monday evening.

The hometown District 8-AAA Eaglettes, celebrating Senior Night, found that the District 8-A Lady Bulldogs came calling with their hitting shoes on as they pounded Shelbyville for 17 hits in an 8-6 Cornersville victory.

“Absolutely a big win for our team,” Cornersville coach Nathan Polk said. “Anna Wood played really well and this win shows the capabilities of our team.”

Wood was 5-for-5 at the plate with a double, scored two runs, drove in two runs, and had one stolen base for the Lady Bulldogs.

“It was a good game for us,” Wood said. “We stuck with it even though we had a couple of errors,

Aleia Childress and Carmen Ward paired up in the circle for Cornersville, keeping the Eaglettes off-balance with an assortment of breaking pitches and fastballs.

Childress, who used several pitches to keep the Eaglettes batters at bay said, “My best pitches were my screwball and my drop ball.”

Wood led off for the Lady Bulldogs in the top of the first inning with a single to right field and Jayli Childress followed with a single to left to put two runners on with no outs for Cornersville.

The Eaglettes then turned a nifty double play when Alicia Polk flied out to center field and Wood was cut down trying to advance to third base.

Molly Wells drew a walk, but she and Childress were stranded when Ward grounded out into a 4-3 putout to end the top on the first inning.

Jaliegha Harris led off with a walk for Shelbyville in the bottom of the inning, stole second base, and reached third base on Alyvia Smith’s ground before scoring on a sacrifice fly by Mary Alice Shavers.

Sarah Housch and Kate McKamey followed with singles, but were stranded when Aleia Childress induced a fly ball out to right field by Kaydence Rippy to end the bottom of the first inning with Shelbyville leading 1-0.

Shelbyville struck again in the bottom of the inning as Evie Winfrey was struck by a Childress pitch and Damonyai Lyons singled to center field.

Harris was safe on an error with Winfrey scoring and Smith on a fielder’s choice drove in Lyons to put the Eaglettes up 3-0 after two innings.

The Cornersville bats came alive in the top of the third inning.

Wood led off with her second hit in the top of the inning and Jayli Childress followed with a double to left field that plated Wood to make the score 3-1.

“We had batting practice yesterday and I made one little change that made the difference (in her hitting),” Childress said.

Alicia Polk doubled to score Childress and Polk scored on a blooper to right field by Molly Wells to make it 3-3.

Ward singled and Aleia Childress knocked in Wells on a dribbler to the right side before Hannah Moore drove in Ward with a single to center field to give the Lady Bulldogs’ the lead at 5-3.

Woodard doubled to put Cornersville runners at second and third before Wood got her second hit of the inning as she pounded a double in the gap to score Woodard and Moore to make the score Cornersville 7, Shelbyville 3.

Childress threw an assortment of breaking pitches mixed in with a few fastballs to get two quick outs in the bottom of the third inning, but base hits by Rippy and Burks put two Eaglettes’ runners on.

Childress got out of the inning by getting Winfrey to fly out to center field.

The Lady Bulldogs got two runners aboard in the top of the fourth inning when Ward singled and Aleia Childress got on via an error, but the Lady Bulldogs could not bring them around.

After giving up a walk to Lyons in the bottom of the fourth inning, Childress was forced to leave the game with health issues and Ward came on in relief.

A Lady Bulldog error put Harris on and Lyons to third base where she scored on a wild pitch to make the score 7-4.

Housch drove in Harris and McKamey drove in Housch to make it 7-6.

Ward bore down and got Rippy to end the inning with a fly ball to center.

The Lady Bulldogs responded in the top of the fifth when Wood smacked a single to left field and then promptly stole second base.

Wood came home as Jayli Childress slammed a double to left field to make it 8-6 and set the Eaglettes down in the bottom of the fifth inning and Burks did the sane to Cornersville in the top of the sixth inning.

Ward, as she has shown this season, gets stronger as the game goes along as she was dominant in the bottom of the sixth inning.

The Lady Bulldogs looked as if they were getting ready to burst the game open when they loaded the bases with no outs in the top of the seventh inning, but Burks managed her way out of the tough situation.

The Eaglettes threatened in the bottom of the seventh as they got two on with one out, bringing the tying run to the plate, but a strikeout and a fly ball to Jayli Childress in left field secured the Cornersville victory.

“We had a good team effort despite some errors,” Woodard said.

Shortstop Alicia Polk summed it up, saying, “I am impressed, we had some players step up with hits that had not been doing that in the last few games. It is a big win for us. I’m proud of the team.”

The Lady Bulldogs return home for district games against Fayetteville Tuesday evening and Moore County on Wednesday then hit the road for games at Eagleville on Thursday and on Friday at Santa Fe.