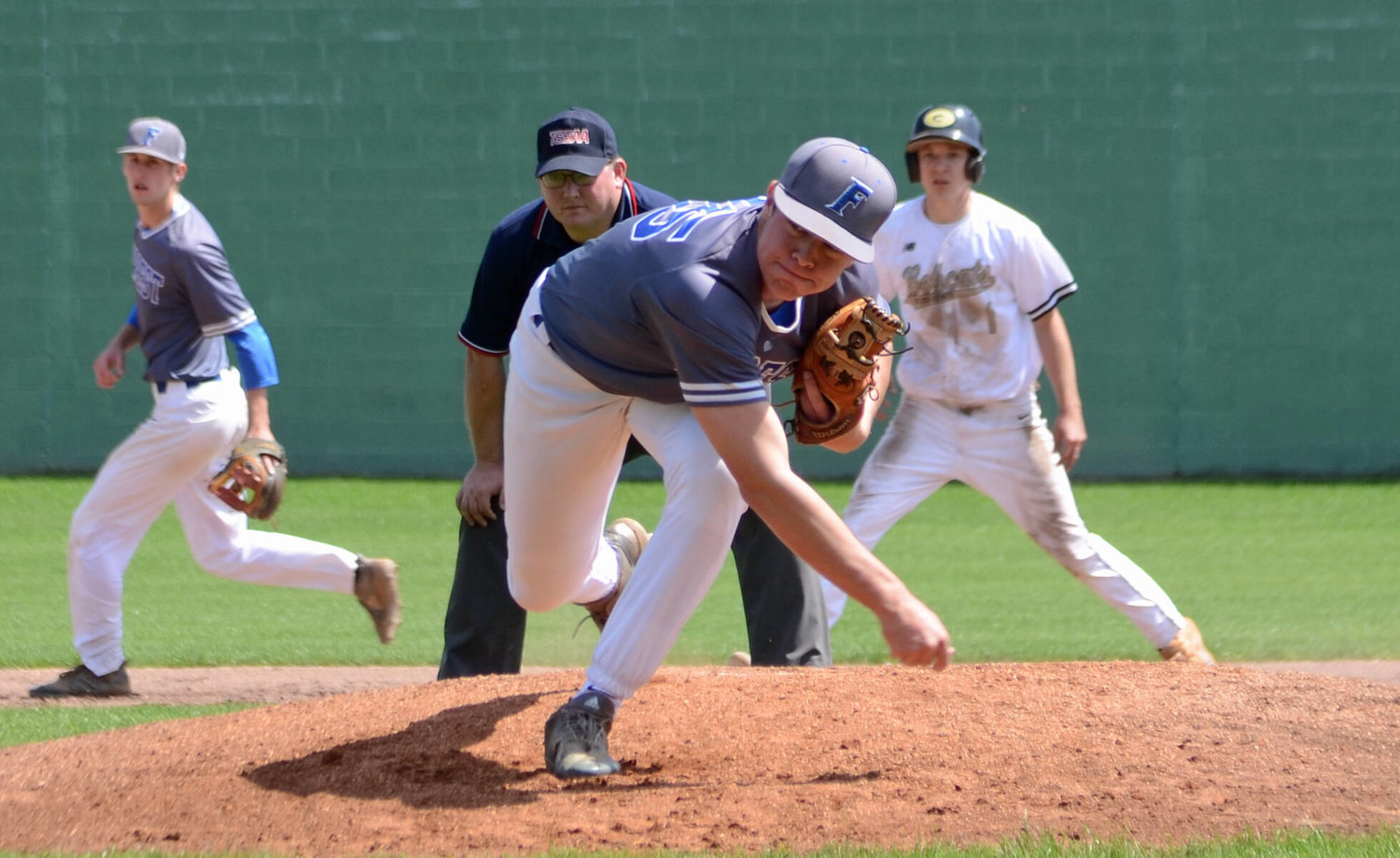 Forrest senior Max Kirby gets a strikeout with a runner on second base and one out in the first inning during his complete game 11-4 victory over the Bobcats at Sam Davis Park in Pulaski on Tuesday.
Tribune photos by Anthony S. Puca 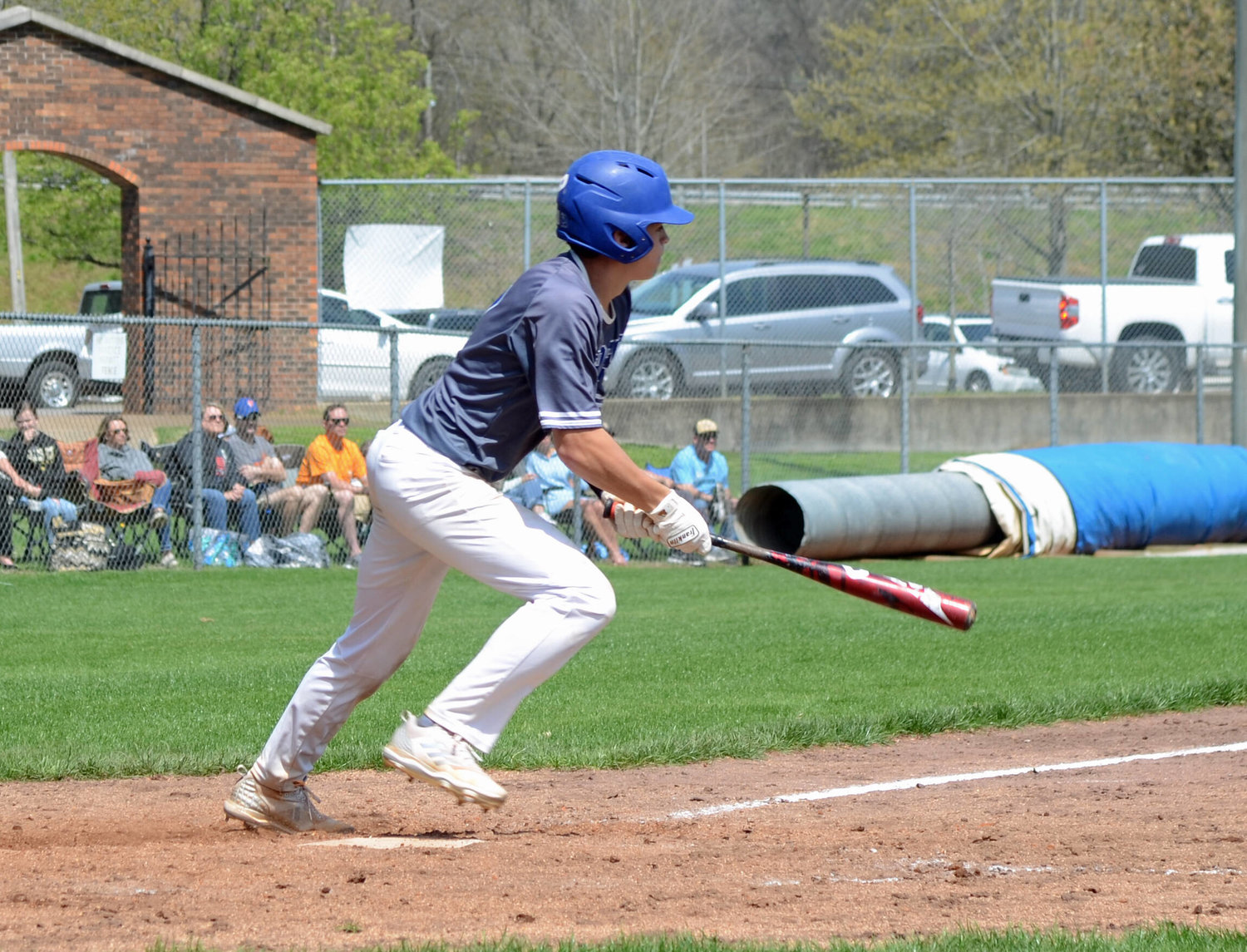 Bryson Smith drills a game-tying RBI single in the top of the fifth inning for the Rockets. 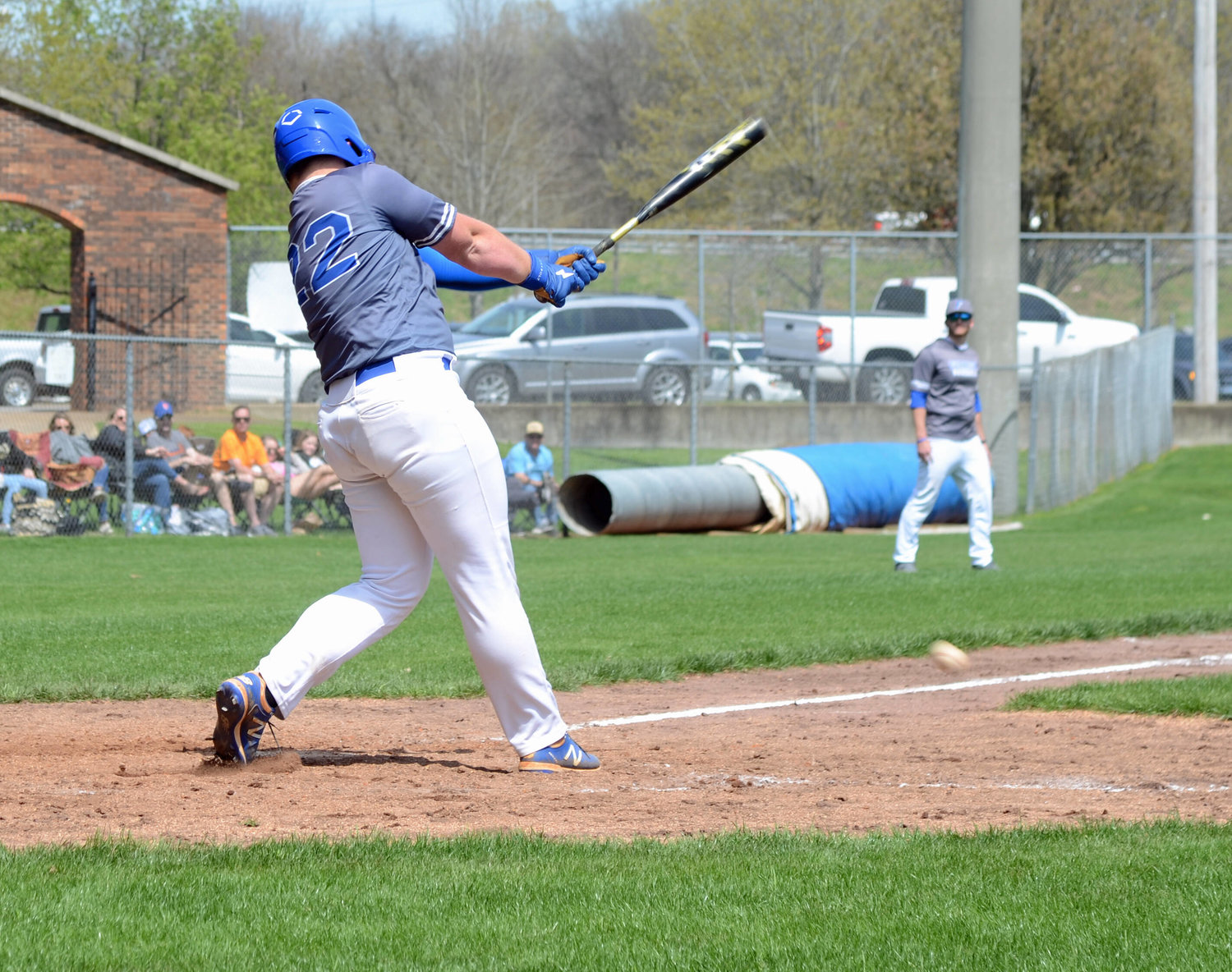 Braden Bowyer drives in the go-ahead run in the top of the fifth inning with a fielder’s choice RBI. 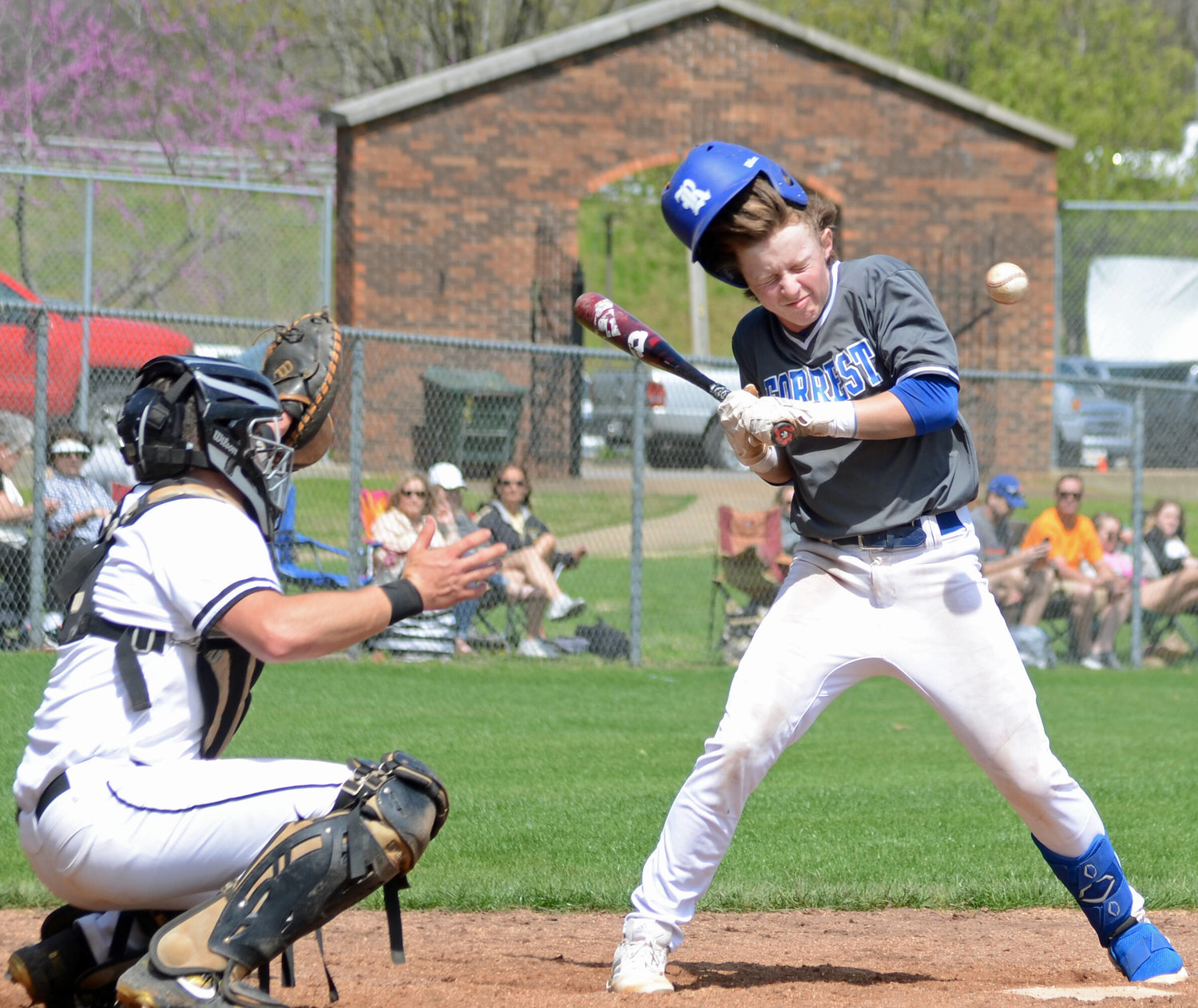 Carter Walk gets nailed in the helmet to start the big, four-run sixth inning for the Rockets. Walk was not injured on the play and continued to first base. 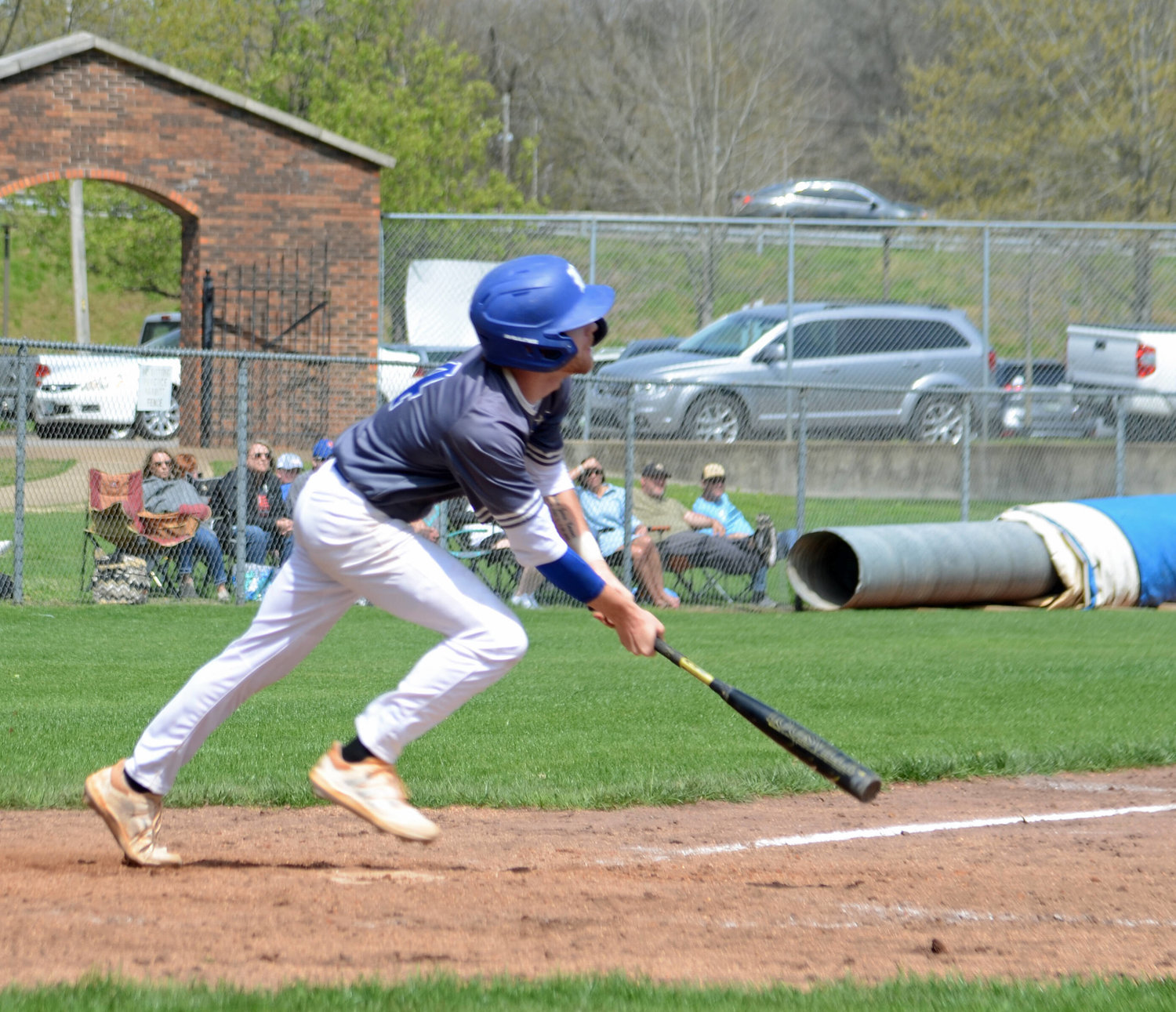 Cannon Cervantes, who had two hits at Pulaski on Tuesday, knocks in a run with a base hit to right field in the sixth inning. 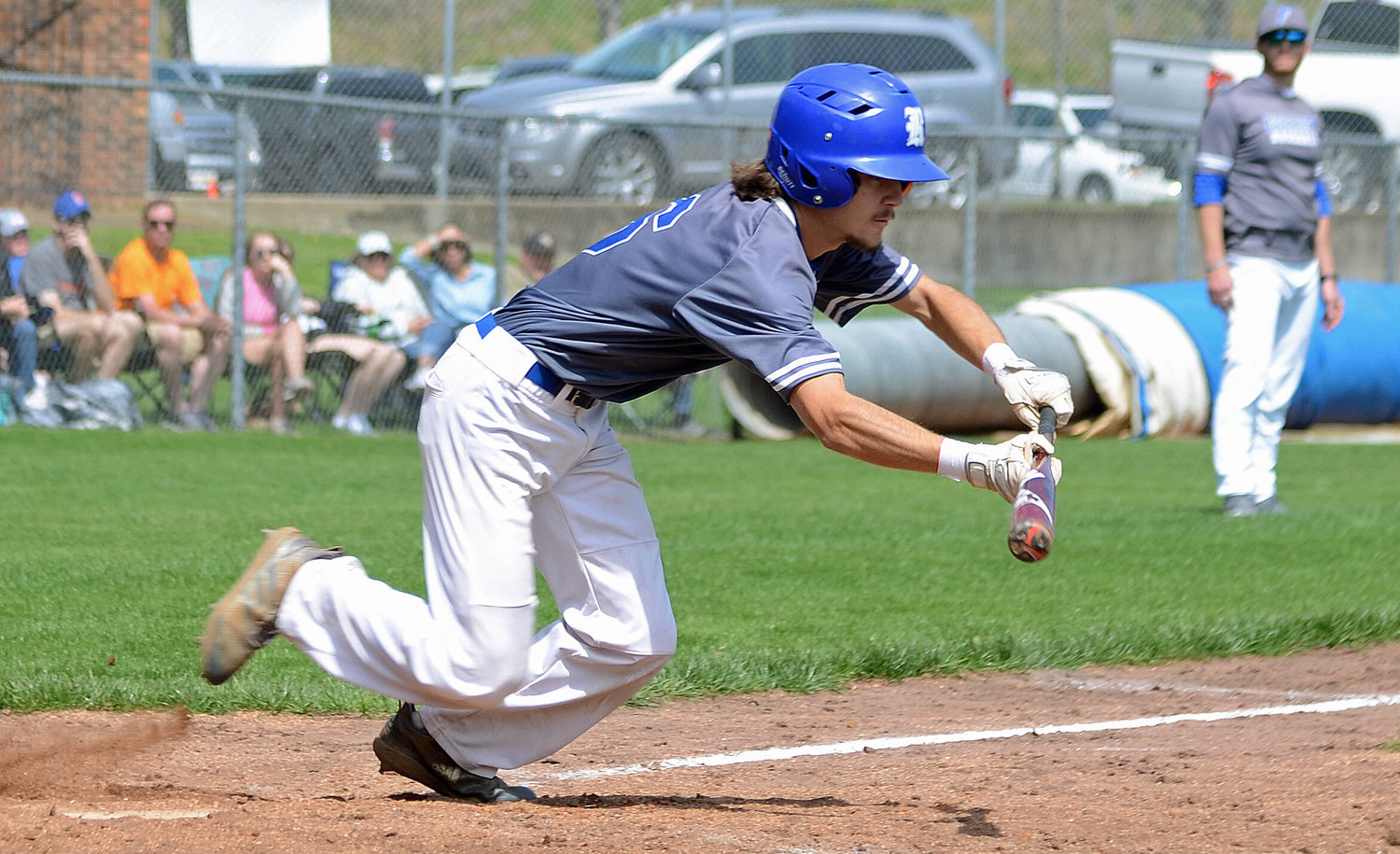 Justin Gillespie executes a perfect bunt single to put runners on first and second base with no outs in the sixth inning.
Previous Next
Posted Tuesday, March 30, 2021 11:00 pm
Anthony S. Puca Sports Editor

After a 4-1 District 12-AA loss to Giles County at home on Monday, Forrest senior Max Kirby made his first start of the season on the mound on Tuesday versus the Bobcats at the fabled Sam Davis Park in Pulaski where he turned in his best performance of his varsity career, wheeling and dealing his way to a complete game victory as the Rockets won going away, 11-4.

“Monday night was a tough game for us…that kid Jake Cardin, the lefty on the mound, he is going to be something special, he is just a sophomore and he had some good stuff and kept us off balance all night,” Forrest coach Andy Burkett said. “Even later in that game I thought we squaring balls up a little bit, but were weren’t finding the holes, so it was really nice to see our guys come out today and swing aggressively against some pretty good pitching.”

“You can’t say enough about Kirby, I don’t think he was going to let me take him out of the game, he wanted that one badly.”

Kirby, who was not going to come out of the game at any point, threw 97 pitches in the contest and gave up seven hits, three earned runs, struck out six and walked three Giles County batters.

“Coming out here I just wanted to throw strikes, the games I came and closed I struggled to find the strike zone, but one day after practice me and coach Burkett worked on some mechanics and got me going in the right direction, so it was good to get that first district win,” Kirby said. “At about the fifth inning I told him (Burkett) don’t take me out, just don’t take me out, I feel good, just let me throw coach and he let me.”

Kirby was also chasing some family history as his dad Todd had homered at Sam Davis Park and he almost matched the feat in the bottom of the seventh inning when he crushed a pitch that just missed going out, only to hit the massive historic green wall in left/center field.

Kirby settled for a two-run double that closed out the scoring for Forrest, who lashed 13 base hits in the contest with Kirby, Cannon Cervantes, Camden Vaughn, Kain Moses, Bryson Smith, and Justin Gillespie all coming up with two apiece while Braden Bowyer and Carter Walk had one safety each.

The Rockets came up with an unearned in the top of the first inning and the Bobcats tied the game in the home half of the frame on an RBI double by Coleman Siniard.

There was no scoring in the second inning as both pitchers faced four batters.

Vaughn and Cervantes lashed back-to-back, one-out singles in the top of the third inning before Kirby drove in Vaughn to make it 2-1 ballgame.

Kirby was strong on the mound in the home half of the inning and in the top of the fourth inning, the Rockets stranded two base runners.

Kirby issued back-to-back bases on balls with one out in the bottom of the frame and they both eventually came around to score with Will Hargrove crossing home plate on a Forrest error and Riley Cardin scored the go-ahead run on an RBI base knock by Tucker Tune.

In the top of the fifth inning, the Bobcats learned the hard way about issuing walks as Forrest turned the tables with Kirby and Moses reaching first on walks before Smith drilled an RBI base hit and Moses came home to score moments later when Bowyer knocked him in with a fielder’s choice ground ball, putting the Rockets in front 4-3.

Kirby set down the Bobcats 1-2-3 in the home half of the inning and the Rockets took out some big insurance as they plated four runs in the top of the fifth inning with Cervantes and Smith driving in one run apiece and Moses knocked in a pair with a two-run double as Forrest took a commanding 8-3 lead.

The Bobcats scored one run in the home half of the inning on an RBI base knock by Jack Harper, but the Forrest offense was not done as Vaughn drove in a run with an RBI single and Kirby’s near miss home run plated the final two Forrest runs.

Kirby gave up back-to-back singles to start the bottom of the seventh, but somehow reached down for some extra juice as he retired the next three Bobcats in order to secure the all-important district win for the Rockets.

“I’m very happy to get the win today and get this series even,” Burkett said. “Our district is one of the toughest in the state and if you can get out of our district anything can happen, so we have to get those district wins first and foremost.”

The Rockets (5-2, 1-1) host Lewis County on Thursday and Page on Friday before entertaining the Marshall County Tigers (2-3, 0-2) in an intra-county, District 12-AA battle on Monday night at Chapel Hill.