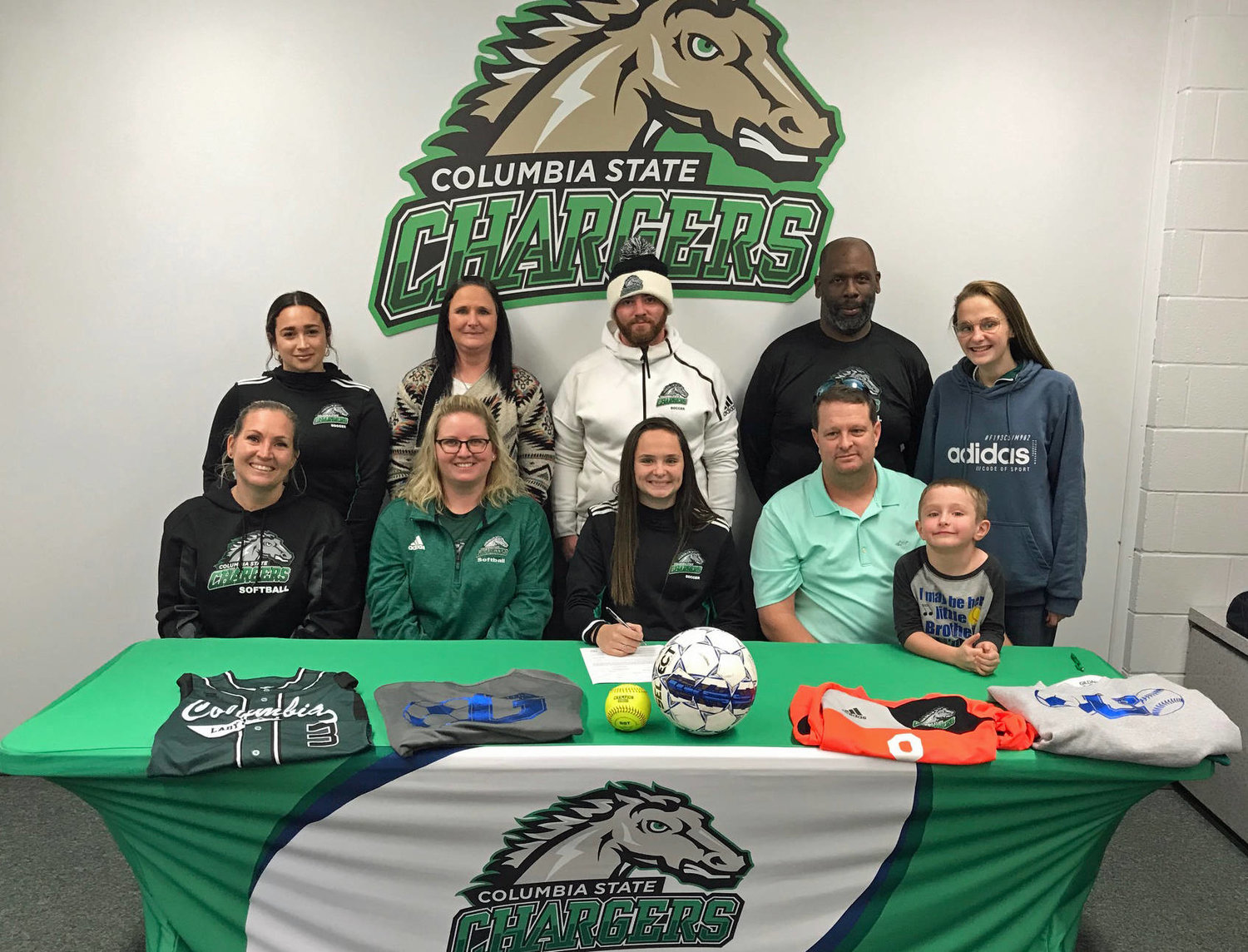 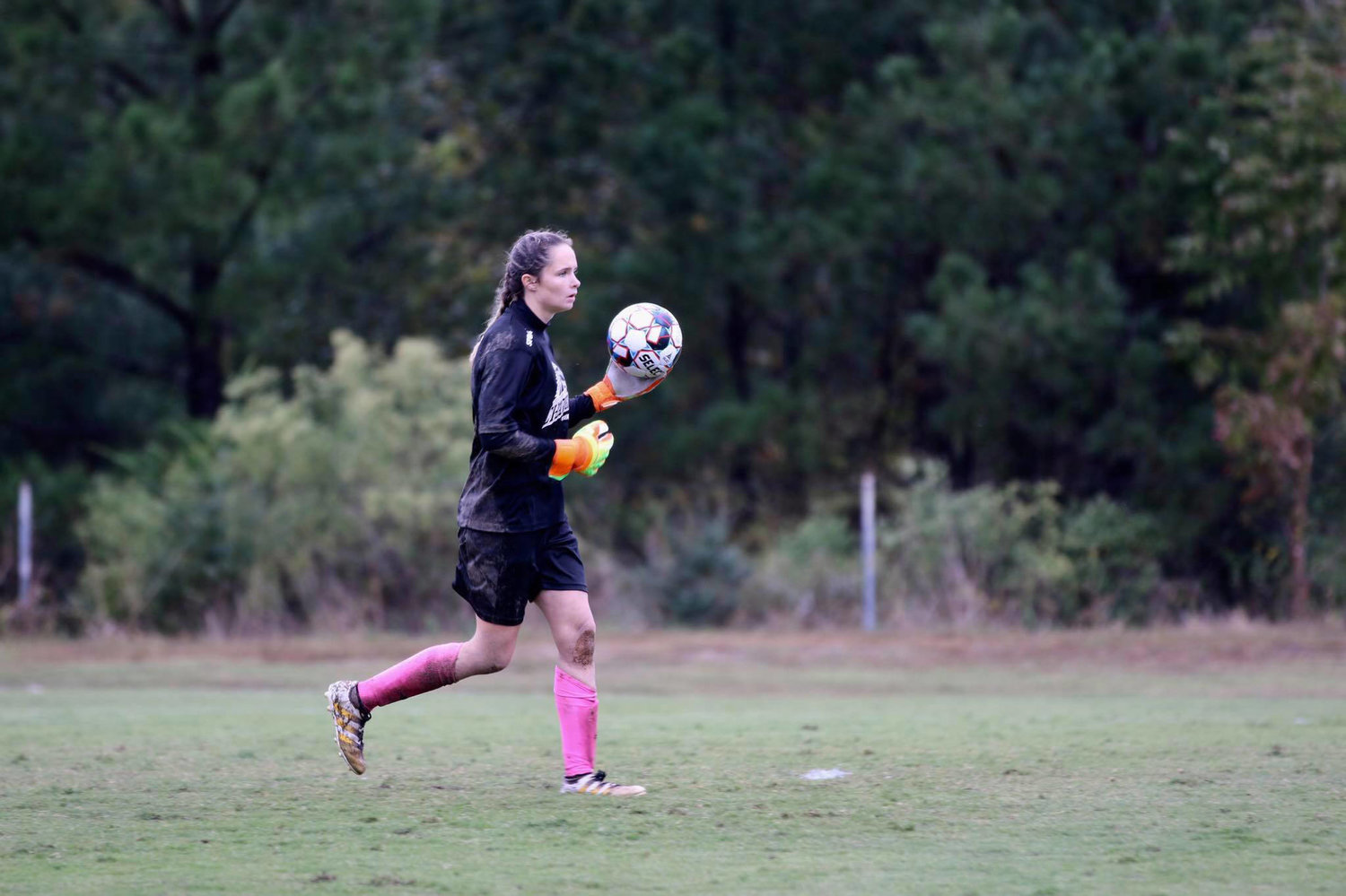 Goal keeper Jasmine Runk was part of the inaugural Columbia State Community College soccer program that won a region title in its second year of existence and now she will play softball this spring for the Lady Chargers before departing for Glenville State College in West Virginia where she will continue as a two-sport athlete.
Photo submitted
Previous Next
Posted Wednesday, March 11, 2020 11:00 pm
Anthony S. Puca Sports Editor

“I’m extremely happy, this is my future, so I’m pretty excited about it,” Runk said. “Not playing softball for two years and going back in to it makes me very excited.”

Runk also had offers from Marian University, Martin-Methodist College, Jackson State College, and a school in New Mexico and California.

“I’m very proud of Jasmine, the process has been long, but she ended up picking Glenville because it felt like home and we also have two other girls (Shyanne Martin, Maria Perez) that will be joining her there as well, so she will be travelling with family to new family,” CSCC soccer coach Colton Bryant said. “For her it came down to academics and the feel of the school.”

“I think it will be interesting at the four-year level being a two-sport athlete, but look she is an athlete so she will be able to do it, there is no doubt on the soccer side she will progress and on the softball side, that’s what she’s done her whole life, so that is natural to her, she will be fine.”

Runk knows all about success on the athletic fields as her senior softball class at Forrest posted a 132-25 overall record and incredible 43-2 district record with one state championship in 2015, three consecutive state tournament appearances, four straight district titles, and one region title.

Runk also played four years on the pitch at Forrest and was recruited by Bryant to become a member of the inaugural team at CSCC in 2019.

Amazingly, the Chargers posted a 4-4-0 regular season mark and outscored their opponents 13-to-8 with four shutouts and all four losses were by a single goal.

In year two, Bryant had an opportunity to extend the recruiting arm and it paid off as the Chargers posted a 10-7 overall record and finished in third place in the Tennessee Community College Athletic Association Conference with a 3-3 mark.

Six days later they lost 3-1 to St. Louis Community College in the NJCAA Central District semifinal, but they had the region crown for the trophy case in just their second season with Runk playing a major role as she excelled in guarding the goal for the Lady Chargers.

“It been awesome having Jasmine,” Bryant said. “In terms of character there is no other, she is a special character and an even better player, she has just been a special person.”

So far this spring, Runk is 1-for-5 and has played three games in left field for the Lady Chargers softball team and is just coming off the injury list after a pulling a hamstring on her way to first base after stroking her first collegiate base hit in an 8-7 win over Dyersburg State Community College on March 1.

“We are actually pretty excited about having Jasmine, Forrest has a great program, we are looking at few kids for next year and the next,” CSCC softball coach Lori Lindsey said. “I can’t say enough about how happy we are about having her on the team.”

“It’s very rare for someone to go to the next level and play two sports,” Lindsey said. “For her to get the opportunity to play two is huge, so we are glad we can be a part of that to help her get ready for that, but I think she will fit right back in like she never stopped playing because she is determined.”

Runk will be in a similar situation when she arrives at Glenville State next year as the Lady Pioneers will be playing in just their fourth full soccer season and Runk was very comfortable in her decision to choose the Lady Pioneers.

Runk, who currently sports a stellar 3.3 GPA at CSCC and plans on continuing her studies in exercise science in preparation for a career in physical therapy had some advice for young girls reaching for a dream of playing sports at the collegiate level, saying, “Never give up on your dreams, they are out there, don’t give up on them, you can reach them, so anything is possible and just go for it.”