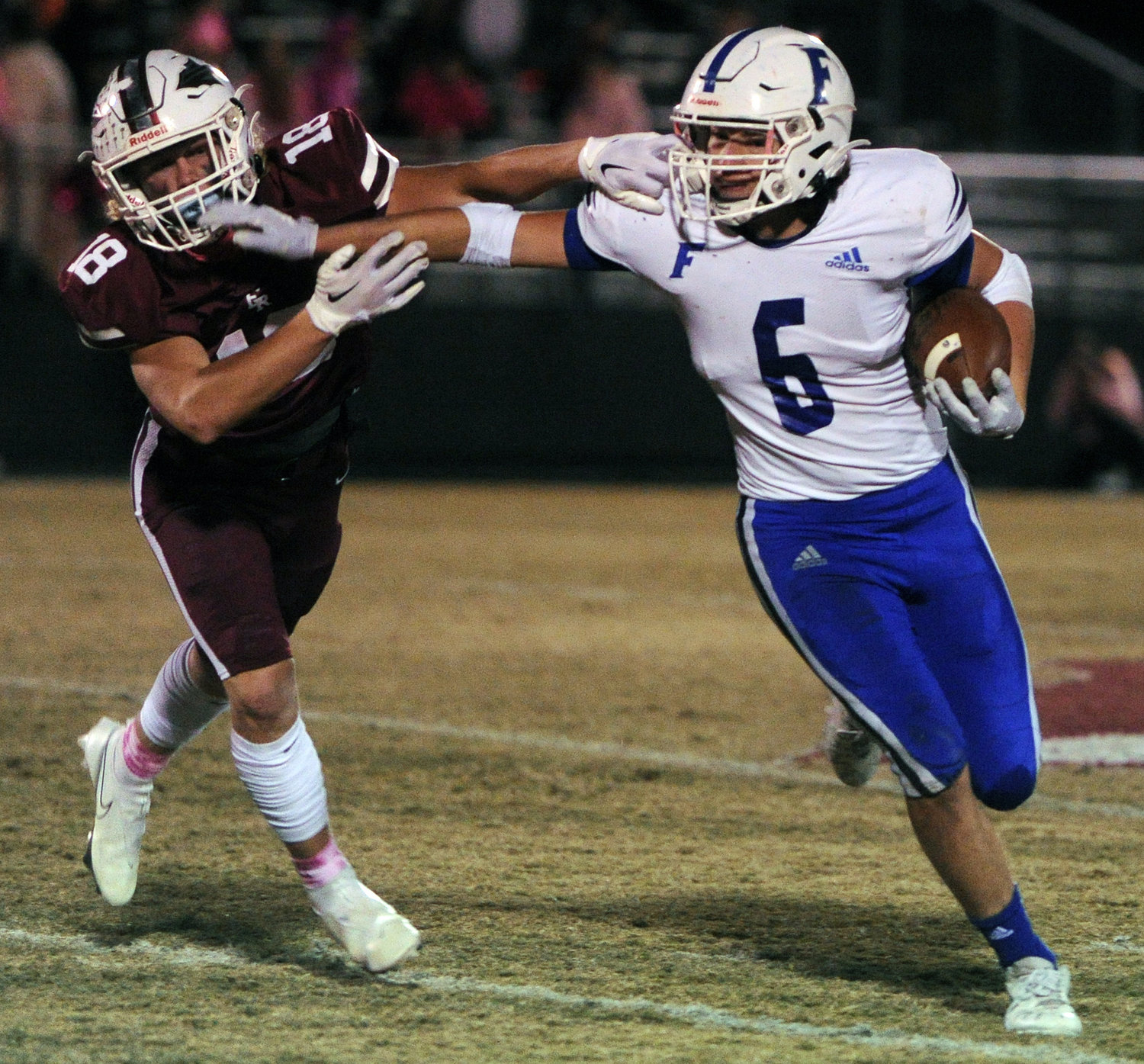 Liam Bell gives a fierce stiff-arm and barrels forward for a 14-yard gain for the Rockets. He had 71 yards on 17 carries and a touchdown for Forrest.
Tribune Photo by Chris Siers 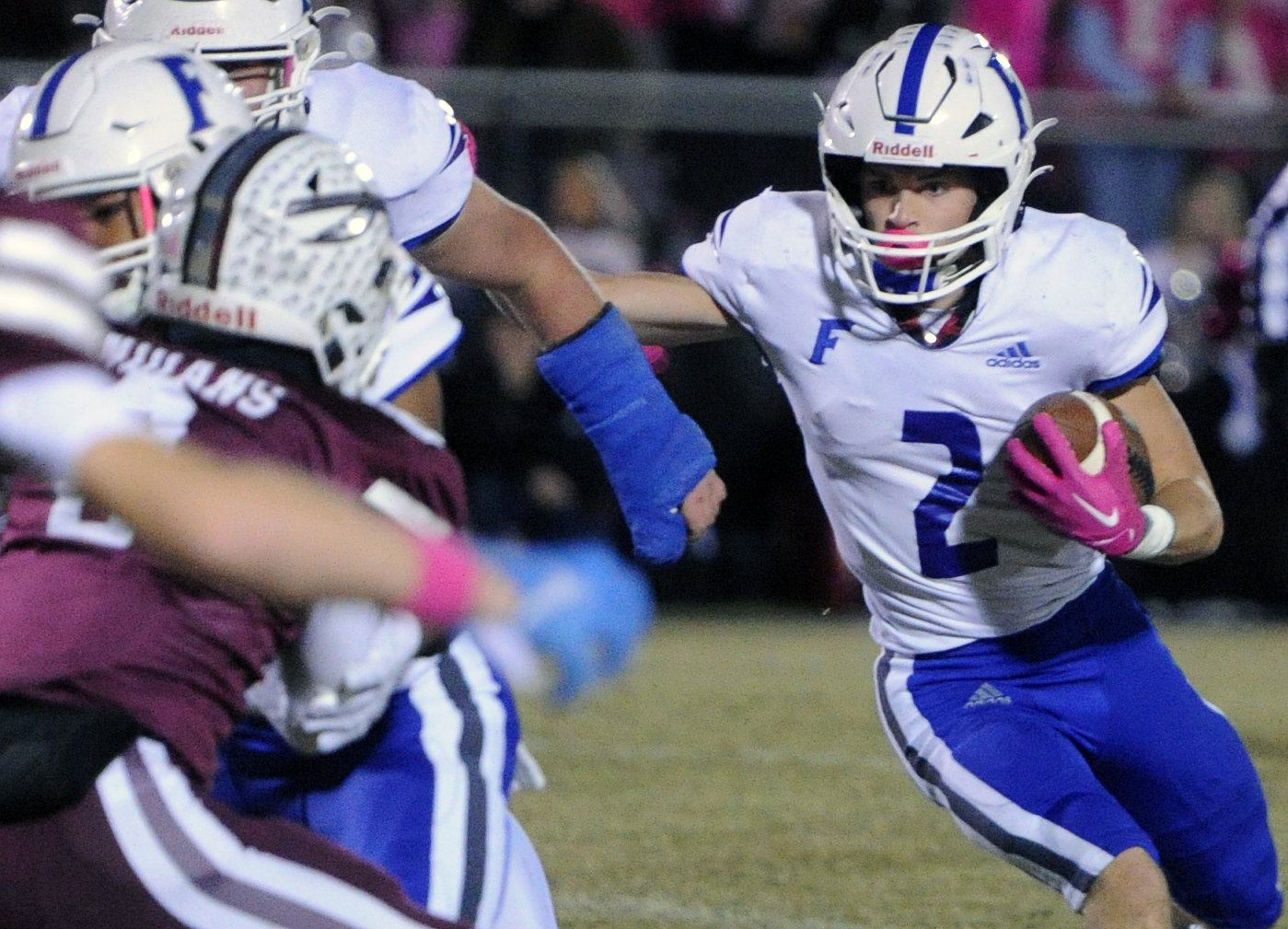 Senior tailback Tayton Swift guides his blockers on a big gain for Forrest on Thursday night at East Robertson. He finished with 110 yards on 20 carries for the Rockets.
Tribune Photo by Chris Siers 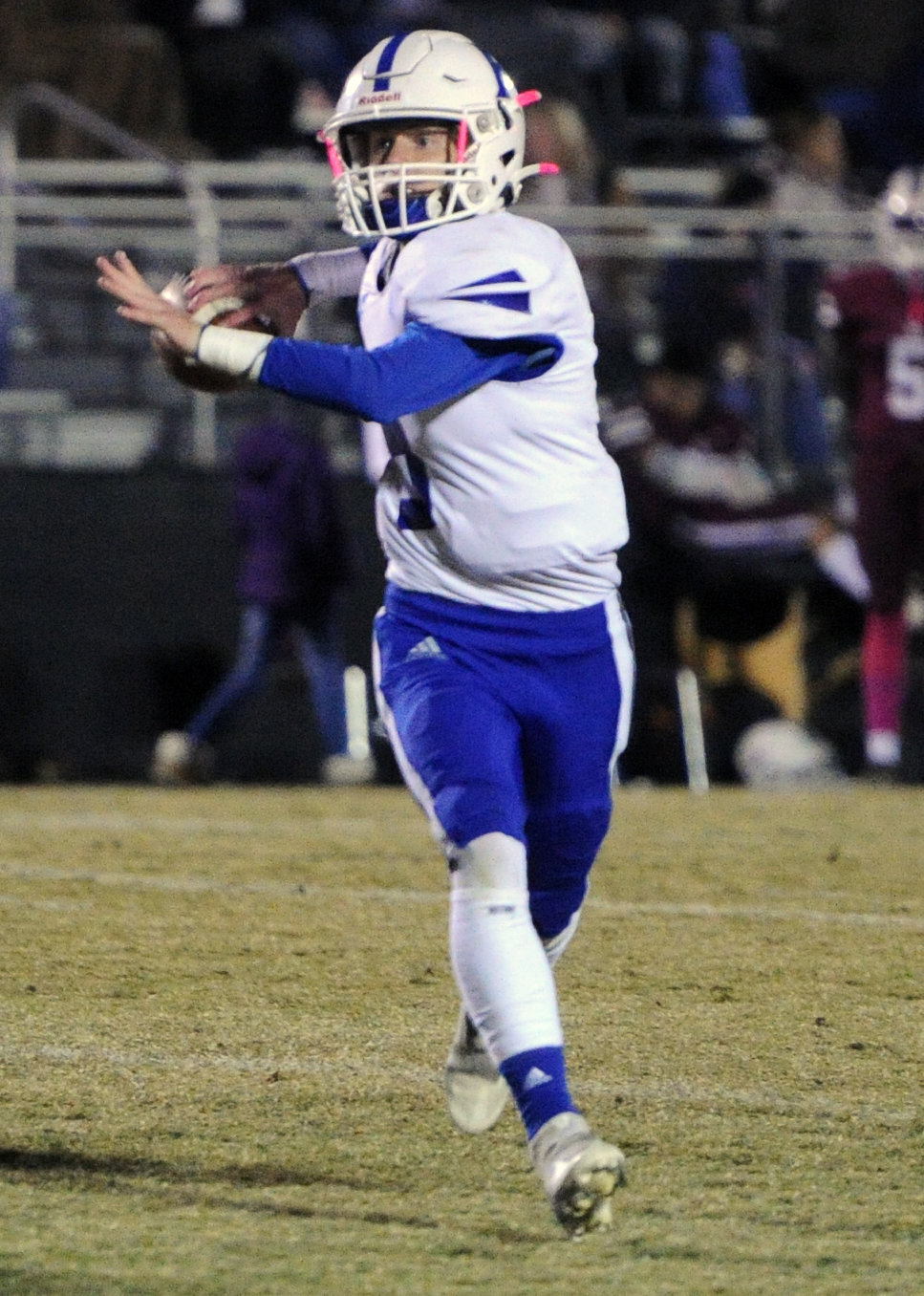 Quarterback Ryan Hill peels out of the pocket and keeps his eyes downfield. He completed 4-of-7 attempts for 52 yards against the Indians.
Tribune Photo by Chris Siers
Previous Next
Posted Friday, October 21, 2022 11:07 am
By Chris Siers ~ sports@t-g.com

CROSS PLAINS — A handful of shock plays from their star players allowed East Robertson to knock off the Forrest Rockets in Thursday night’s non-region matchup.
The Indians (8-1) scored three touchdowns from 59, 72 and 80 yards to pull away for the 35-14 win over Forrest.
The Rockets (3-6) had chances to match the Indians’ production on the scoreboard, but three scoreless trips inside the red zone ultimately proved costly in the loss.
“Our kids played hard. We have to put it in the end zone when get down there. We came out slow after that opening kickoff, but they responded in the second half. They had a character check at halftime and they came out in the second half and left it all on the field,” Rocket coach Eli Stephenson said.
The Indians got on the board early and never let off the throttle after the speedy Zech Prince returned the game’s opening kickoff 95 yards to put the home team up 7-0 following the successful kick after.
Forrest answered in short order with a steady mix of Liam Bell, Tayton Swift and Chris Davis pushed well into Indian territory.
But the seven-play drive eventually stalled after three-straight negative plays backed Forrest up to fourth and long.
After both teams were unable to score through the remainder of the quarter, Forrest again found itself on fourth down from the 11-yard line, where the Rockets attempted a field goal try, but the kick was blocked by East Robertson.
On the following play, Prince found a crease and streaked 80 yards to the end zone, bumping the Indians’ advantage to 14-0.
After forcing a Rocket punt on the next possession, East Robertson struck again on another huge play, this time coming from Isiah Groves on a 59-yard run, giving the Indians a 21-0 advantage with 7:21 left in the half.
“They’re athletic all over the field. They have kids that can really run,” Stephenson said.
The Rockets again answered and moved the ball well on the Indian defense and this time, capped the 6:10 minute, 12-play drive with a one-yard quarterback sneak by freshman Ryan Hill to put the Rockets on the board.
Having seemingly captured the game’s momentum, the quick-striking East Robertson offense went into hurry up mode and found the end zone with 15 seconds left on the clock when quarterback Collin Cook lofted a touch pass to the corner pylon to give the home team a 28-7 lead at the half.
The Rockets opened the second half with another clock-draining drive that Bell capped on a two-yard score with 6:28, cutting the lead to 14 points after Gavin Grissom’s successful kick after.
Stephenson opted for an on-side kick, which Forrest successfully recovered on the following kick off and as with their three previous drives, the Rockets were able to move the ball well into Indian territory.
But a stop in the backfield on fourth and short forced a turnover on downs on the East Robertson 20-yard line.
Two plays later, Groves again found a crease and broke loose on a 72-yard touchdown run for the final score of the night.
The Rockets had a chance to cut into the Indian lead early in the fourth quarter, but three-straight penalties backed Forrest up from first and goal from the 10-yard line, to first and goal from the 25.
Forrest did press to the one-yard line, but a fourth-down, goal-line stand held the Rockets out.
The Indians did the bulk of their damage on shock plays courtesy of Groves and Prince.
Prince carried the ball 10 times for 162 yards and two touchdowns, including the 95-yard kickoff return.
Groves went for 165 yards on seven carries and two touchdowns as well.
In total, the Indians piled up 394 offensive yards with 352 coming on the ground.
Forrest wasn’t without its heavy hitters, though.
Senior tailback Tayton Swift had 110 yards on 20 carries, while Bell had 71 yards on 17 carries.
“With kids that come out and give you everything they have, you can’t ask anything more from them,” Stephenson said.
While mathematically not impossible, the Rockets still have a shot at a Class 2A playoff berth, if all the cards fall their way.
Forrest needs a win in Friday night’s regular season finale at Mt. Pleasant, plus help from a few other teams as well.
“We have to go in and play our game. We still have a slim chance at the playoffs. We have to win, but we have to have some help from some other teams. They’re going to come out and be ready to play Friday because that’s the character of the kids,” Stephenson said.
Kickoff is set for 7 p.m. at Mt. Pleasant.