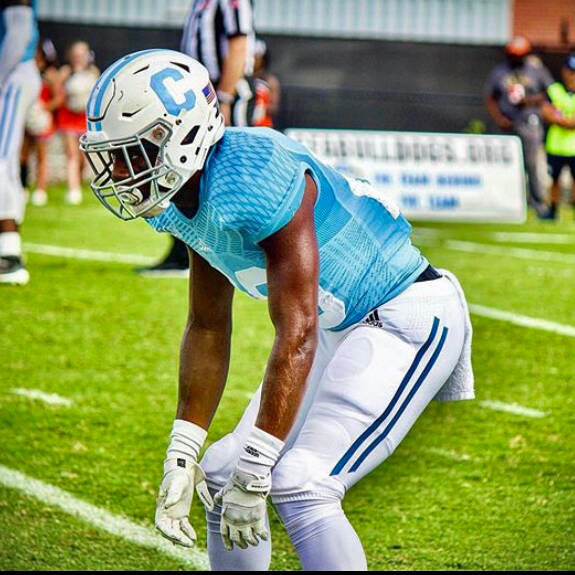 Marshall County High School graduate Jay Howard has excelled on and off the field at The Citadel, earning a starting cornerback position on the football team while finalizing a bachelor’s degree in sports management before entering a master’s program for business administration.
Photos submitted 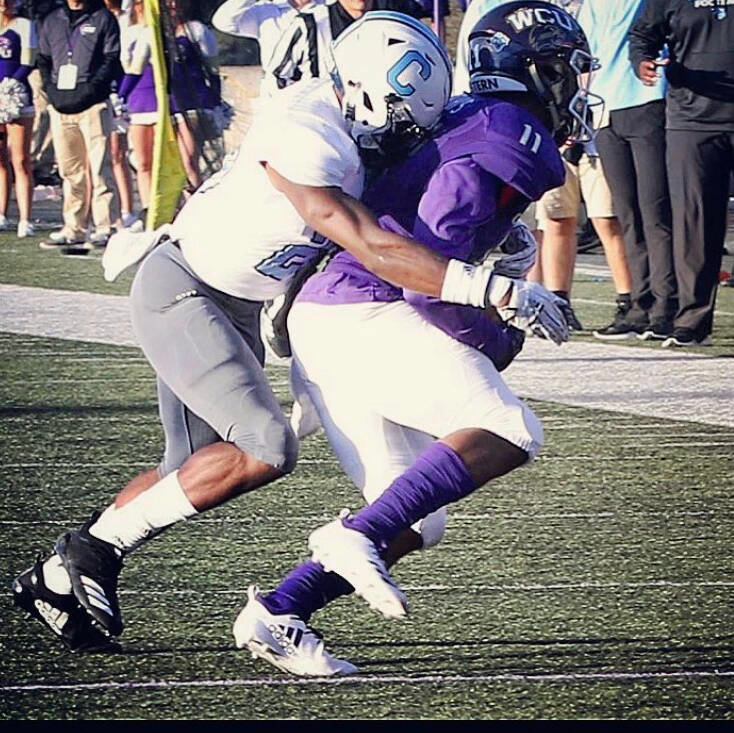 The Citadel’s starting cornerback Jay Howard makes a tackle on Western Carolina receiver Jaylin Young (11) in last year’s 35-17 win over the Catamounts in which Howard came up with four tackles and an interception. 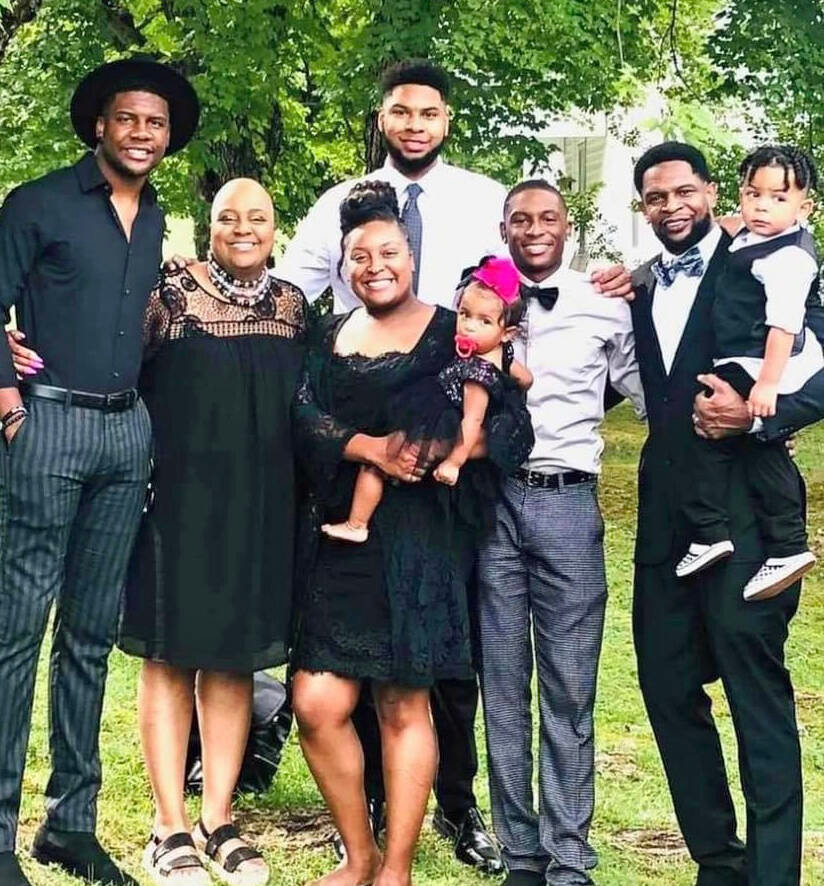 Big things were expected out of former Marshall County athlete Jay Howard when the star receiver chose The Citadel over the Air Force Academy among other offers.

Fast forward four years later and the Lewisburg native has met those expectations and more, both on the field by earning a starting position midway through his sophomore season and in the classroom with a projected graduation date this spring.

One thing is for certain.

Jay Howard is a different man than when the Lewisburg native made the trek to Charleston, South Carolina from this sleepy southern town an hour south of Nashville.

"It has changed drastically," Howard, who holds several Tiger receiving records, recalled. "My freshman year I had to cut my luscious locks and had someone breathing down my neck, telling me what to do every second of the day."

"Coming from a small town where everyone knew everyone else to a huge city was definitely an eye opener as well," Howard continued. "It made me see things differently. To the guys that are about to graduate, get away."

"That's saying a lot since I am a momma's boy, but experiencing a whole new atmosphere that you aren't used to helps you connect with more people and that's the best thing that I could've done now that I'm a senior."

Howard spent his true freshman season on the sidelines, learning the system and getting acclimated to the rigorous daily schedule that life at a military entails.

"I thought I was going to be "the guy" in college," Howard remembered. "It was a reality check once I got redshirted. However, it is a stepping stone and it has its benefits."

"You get to learn from the older guys and you get to perfect your craft," Howard added. "It also gives you an extra year to get your masters which will help you with life after college. Now, starting at a prestigious university means the world to me."

"The opportunity presented it itself and I took it and ran with it."

That opportunity began in 2018 when Howard made the two-deep as a redshirt freshman, earning a valuable role as a backup defensive back.

2018 saw Howard play in 10 games in a reserve role and finish with 11 tackles and a fumble recovery, but it was not how the season started for the redshirt freshman but how the campaign ended.

Howard caught the eye of the entire coaching staff, as the former star receiver who barely played defense in high school, finished the season with a two interception performance during the Bulldogs’ 43-14 route over Charleston Southern.

"Getting those picks was very exciting," Howard, who briefly played cornerback his senior season at Marshall County, said. "Me still being a young buck and getting in there and showing the coaches I can ball is what players live for."

"My dad always told me when opportunity presents itself, take it and run with it," Howard added. "I believe I did that."

The 2019 season once again saw Howard start as a reserve, but the sophomore finished the campaign with five starts to finish with 22 tackles, five pass break ups, a fumble recovery returned for 41 yards and like the previous season, two more interceptions.

The former Tiger great stepped in front of a pass with a 20-yard return during an instant classic 61-55 six overtime loss at Samford paired with an interception, a fumble recovery with a then career-high four tackles in a win against Western Carolina.

Howard seems to have an affinity for big games versus the Catamounts, setting a then career-high three tackles along with a fumble recovery returned 41-yards to go along with the 2019 performance for seven total tackles, two fumble recoveries, and an interception in two games against Western Carolina.

Howard has suited up to play some massive Football Bowl Subdivision (FBS) as well including twice against perennial powerhouse Clemson.

The Bulldogs have also played at Alabama, Army, South Florida, and Georgia Tech during Howard's career.

The Clemson and Alabama games notwithstanding, The Citadel has played the upper division opponents close with narrow losses to South Florida (27-6) and Army (14-9) and pulling off a thrilling 27-24 win at Georgia Tech in front of an announced attendance of 42,871 fans.

Howard has played extraordinarily well against s the enhanced competition with a career high six tackles in the 2020 opener at South Florida and two tackles and a pass breakup at Army.

"With getting looks from major colleges in high school and playing alongside some of the best players in college it makes you think you can play with anyone," Howard offered. "I just love to have the opportunity to showcase my talents against big time schools to show people that it's not mandatory to go to a big name school."

"You can go to any school and showcase your talents," Howard added. "It's just a blessing to play at the next level regardless."

The Bulldogs had a combined 16-18 record during Howard's first three years in Charleston and had started the 2020 season 0-4 against three FBS teams and Eastern Kentucky.

They will resume the rest of the conference schedule on February 27 (due to COVID-19) at Mercer before the home opener on March 6 against former high school teammate and longtime friend Tavi McLean and the Chattanooga Mocs.

And when the season and the spring semester ends, Howard will be on track to receive a Sports Management degree and enter a master’s program for business administration with two seasons of eligibility left with the Bulldogs due to that redshirt season.

"I would love to go into the field of sports marketing or sales," Howard said. "Every athlete's dream is to go to the NFL and if it presents itself, I will most definitely run with it."

"We actually have two people from my school most likely going to the NFL this year," Howard added. "So, any athlete that does not think they can make it to the league without that big school, it is possible."

Much like high school, the best memories from playing team sports at any level is the camaraderie and bonds that you make with your teammates, not just through both wins and losses but also time spent off the field just as regular students before you enter the workforce and the grind of daily life as an adult.

"I would have to say brotherhood," Howard said about his favorite memories of attending The Citadel. "These bonds here are something I wouldn't trade for the world. I say that because if you have not attended this institution, you do not know the hardships we have gone through."

Looking back, having grown up in Lewisburg, playing for Marshall County and representing the team, city and county on a bigger stage means a lot to one of the all-time greats.

"It's a blur," Howard said. "My mom always told me it will be over before you know it. I never believed her, but it was most definitely a blur."

"But being from Lewisburg means the world to me," Howard emphasized. "I would not trade that for the world. Since Peewee (football) it has made me the man I am today. Nothing is like home. Every opportunity I get to come home I am there."

"Representing Lewisburg is huge for me," Howard continued. "Just to go home and people go out of their way to come talk to me means a lot."

"Walking into the Keny building and seeing my picture on the wall with some of the greats means a lot as well."

The Howard tradition of both football greatness and the desire the represent Marshall County onto the next stage has not stopped with Jay, as younger brother A'ky stepped right into his big brother's shoes and made his own mark on the Tiger program.

"Having Jay as a brother and a role model is truly a blessing," the younger Howard stated. "Jay is everything you want in a leader on and off the field."

"Even though me and Jay play differently, we argue everyday over who's the better player," A'ky laughed. "But having him as a role model and a big brother is just a blessing. Most people don't even talk to their older brother or look up to them, but it's different between me and him. It's a bond you can't break and I love him."

"Jay has played a big role in my life," A'ky said. "He is the second person in my family that I look up to next to my father. If I grow up to be as good as one of them I know I'll be a great man.

"Jay has a role that nobody can take away because he gives me a lot of advice about sports but mostly just about life," the senior Tiger said. "Whatever it is, Jay is a great person and a leader in the community. Thank you for leaving your mark!"

That feeling appears to be mutual.

"My little brother is my inspiration to keep going," Jay stated. "I know he looks up to me but I also look up to him. He comes to me in times of need and I'm glad I can give him that extra motivation from that standpoint."

"I tell him football comes and goes but no one can take away your character and the way you present yourself," Howard added. "He has a good head on his shoulders and with that he has the keys to his own plane and can go as high as he wants to."

Like almost everyone else that excels in high school and college both athletically and academically, there are a lot of moving pieces behind the scenes starting with the most important piece-- family.

"Family over everything is my motto," Howard said. "I wouldn't be the person I am without them and I can go on and on for days talking about my family because that's how great they are."

"It starts with my parents though," Howard continued. "They taught my siblings and me everything we know, so to be honored and looked up to is all their doing. My family pushes me to be the best I can be."

"There were many times where I said I was going to leave the school and go to another school but they pushed me and gave me that extra motivation that I needed to push through."

A popular saying about children says it takes a village to raise one.

If the life of Jay Howard up to this point is to be measured by that metric, then the symbolic village made up of coaches, teachers, friends and most importantly family, have to consider this child as a success.

Jay Howard, one of Marshall County's favorite son's, left Lewisburg in the fall of 2017 as a young man with endless possibilities in the world before him.

He will return home this summer as one of the best defensive backs in the Southern Conference but more importantly, with a diploma in hand.

And like so many moments before this one, the son of Freddy and Jasmine Howard will make the city of Lewisburg proud.