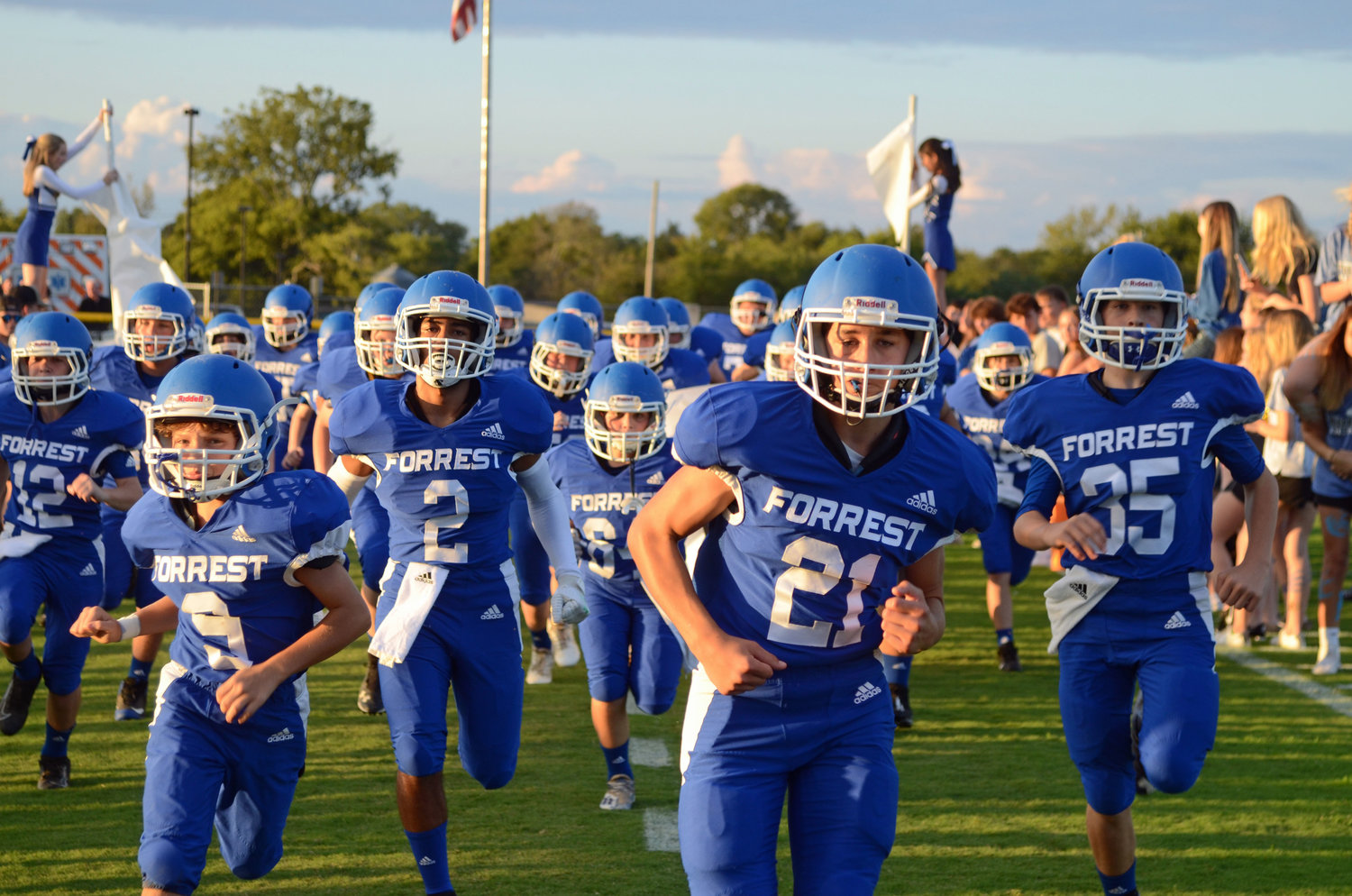 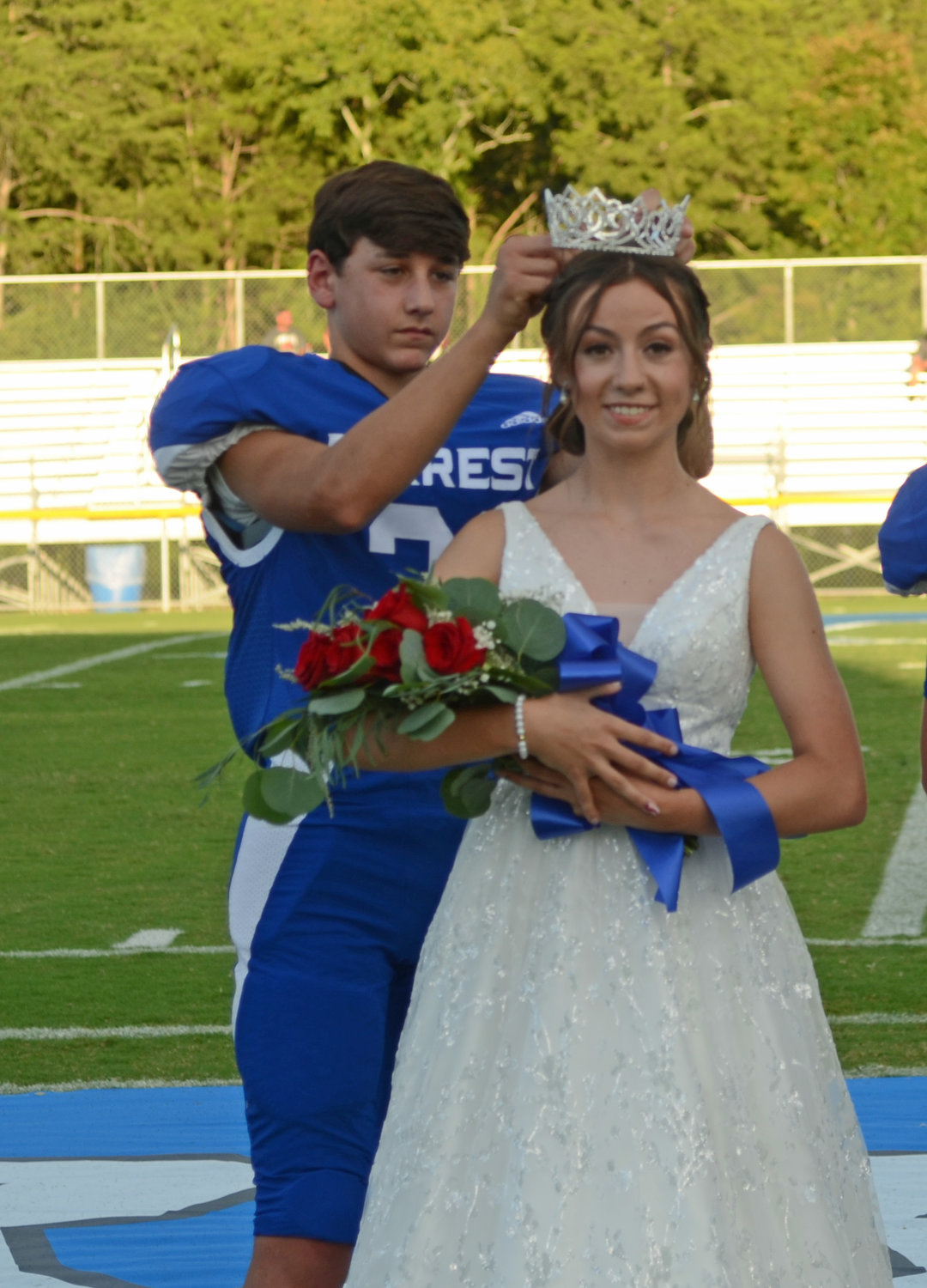 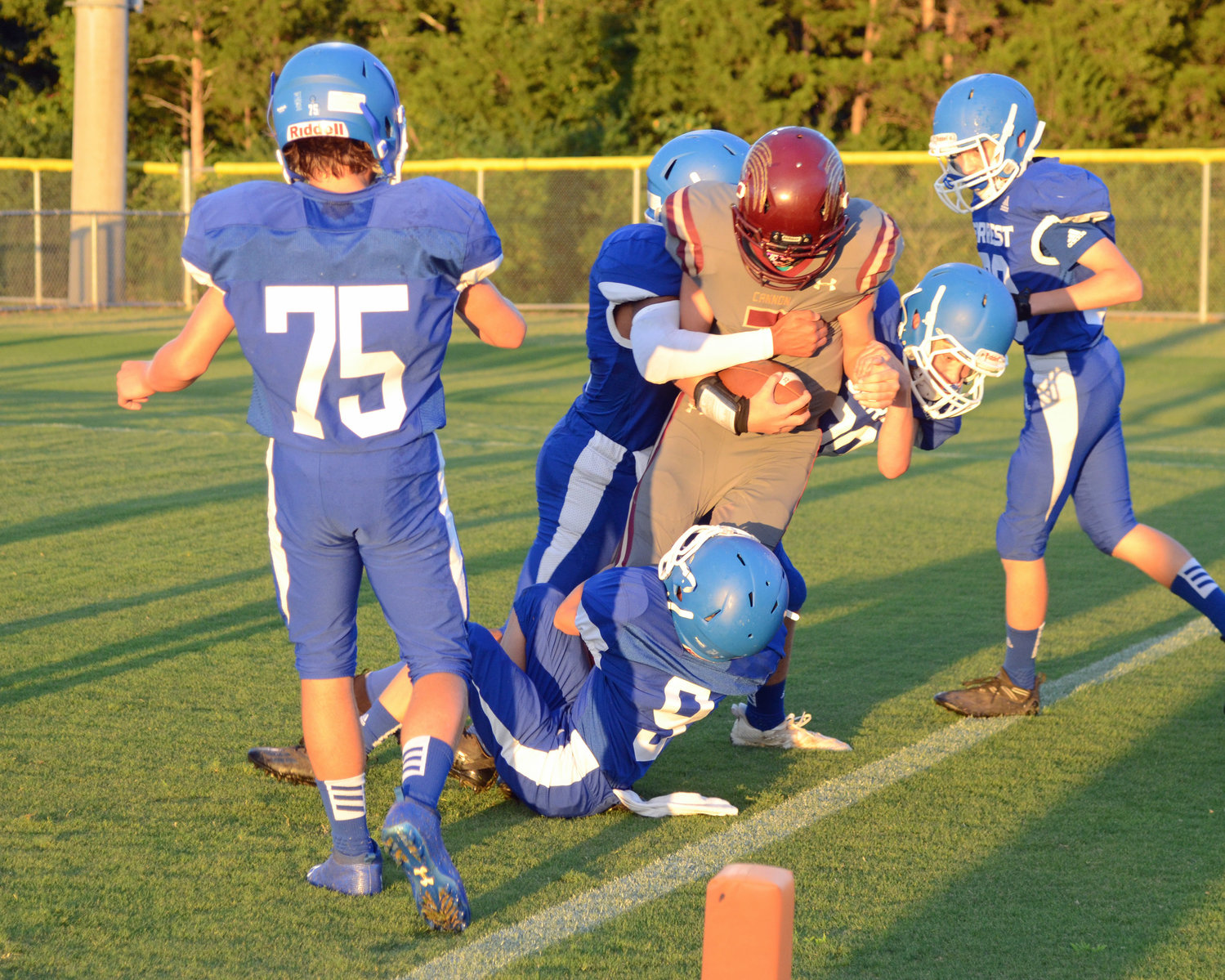 Houston Matlock (9) hangs on while his defensive teammates come in to finish off Cannon County quarterback Eli Garrett for the first of two safeties in the Rockets’ big 66-6 DRVC title clinching win at Chapel Hill Thursday night.
Tribune Photo by Anthony S. Puca 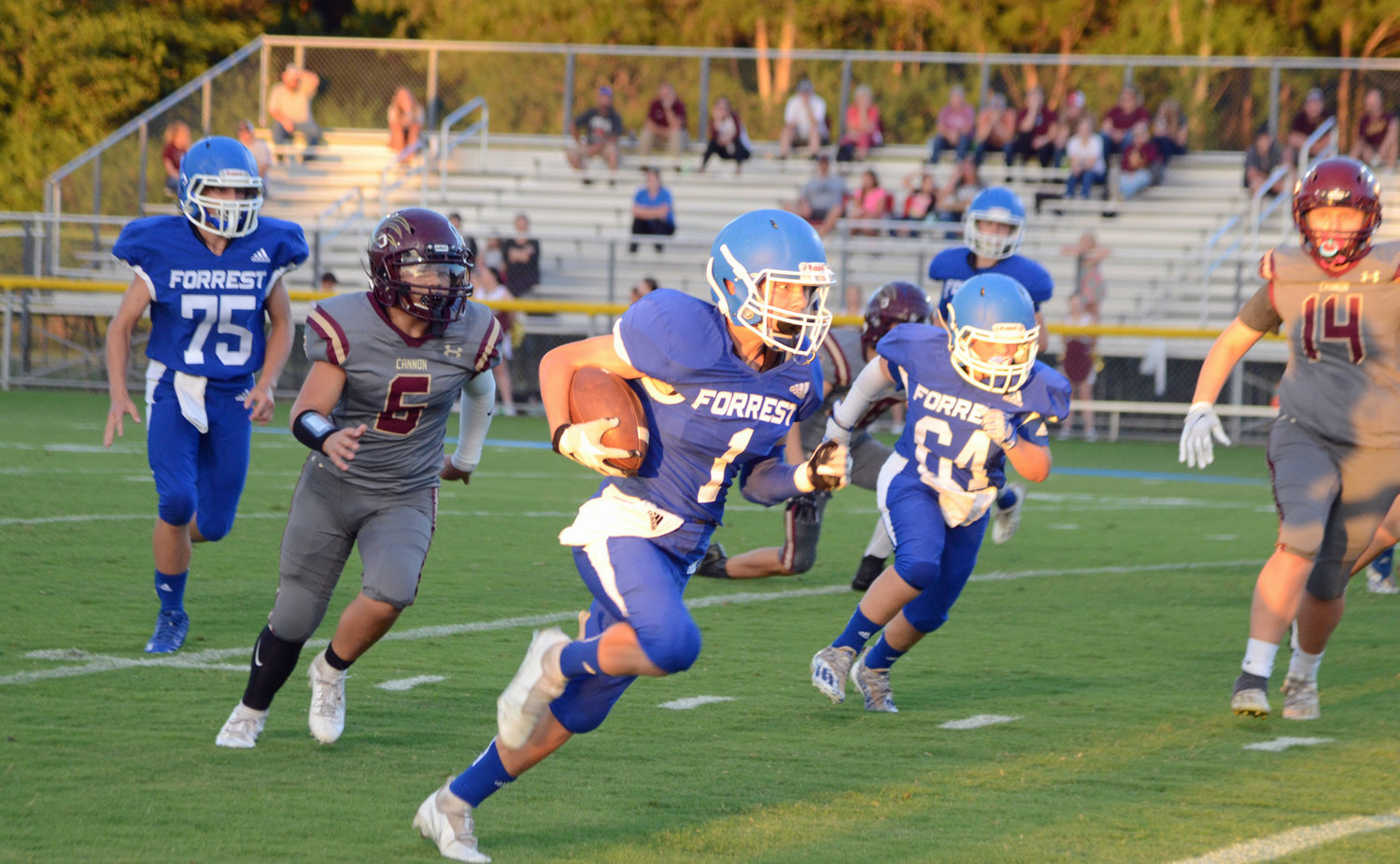 Fletcher Fields (1) turns up field for a 33-yard touchdown run in the first half.
Tribune Photo by Anthony S. Puca
Previous Next
Posted Tuesday, September 21, 2021 10:06 am
By Anthony S. Puca ~ Sports Writer

The Forrest Middle School Rockets (5-0) have been like a screaming locomotive with no brakes all season and they continued to roll on Thursday, demolishing Cannon County 66-6 on homecoming night at the Murrey E. Holton Field in Chapel Hill.

“This group, they amaze me every week,” FMS coach Tony Johnson said. “I feel like when we win big one week, I’m always nervous we will come in the next week and not live up to the week before, but every single week this season they have raised the bar. It’s just simply amazing.”

The Rockets scored the first eight times they had the ball on offense and they never threw a pass except on two point conversion tries.

“That’s our mentality. We want to step on the gas, get on them early and then just keep on hammering it down and break their will, no matter who the opponent is,” Johnson said.

FMS rushed the rock 16 times for 332 yards for a gaudy 20.8 yards per carry with seventh-grader Jacob Tincher leading the way with two touches for 92 yards.

“Every running back that touched the ball tonight did an amazing job,” Johnson said. “From our first-string guys who have been getting a lot of reps all year, to the guys who have gotten little to no reps at all.”

“We have got a lot of speed and we hit the hole hard, so I can’t ask any more out of that group. They are a great group to coach.”

The Forrest defense completely shut down the Lions’ offense, especially in the first half as the Rockets did not allow a first down or a gain of more than six yards.

The Lions ended up with just 84 total yards and their only touchdown came on a Brayden Smithson three-yard run with 7:46 remaining in the contest.

“Our offense is impressive, but our defense a lot of times is even more impressive,” Johnson said. “We get after it. We attack. We don’t let them have any breathing room and we don’t let them get their blocks because we are on them right away.”

Two snaps in to the game, Bell took it to the house from 41 yards out and Ryan Hill passed to Grissom for the two-point conversion.

Grissom boomed the ensuing kickoff and the Lions started at their own nine-yard line where a first down pass lost four yards.

The next snap went over the quarterback’s head and he scrambled for the ball in the end zone where Houston Matlock got there first and then many more Rocket defenders followed for the safety.

The ensuing kick back to the Rockets following the safety was a bad one, giving the ball to FMS at the 33-yard lin.

The Lions went three-and-out again and the punt was popped up, coming down at the Cannon County 17-yard line where Grissom scored on the next play and Hill followed with the two-point run to make 26-0 with 2:12 remaining in the first quarter.

Grissom pinned the Lions deep again and the FMS defense held once more.

The Rockets started their next drive at the Lions’ 44-yard line where Marable ran it in on first down and Hill passed to Fields for two more points, making it 34-0.

The Lions went backwards on their next offensive possession, facing a fourth-and-30 at their own 10-yard line where they punted the ball back to FMS, who started at the 32-yard line with 5:12 remaining in the first half.

Forrest scored on the next play with Grissom running it in for the touchdown and Hill found Bell on the two-point pass.

The Lions went three-and-out again and Hill returned the punt 38 yards to the Cannon County one-yard line yard where Fields busted in for the touchdown and the two-point run by Grissom gave FMS a 50-0 lead.

The Lions had the ensuing kickoff at the 20-yard line before two bad snaps resulted in a Forrest safety, making it 52-0 at the half.

FMS played its second string in the second half and Tincher added his two long touchdown runs for the Rockets, while the Lions finally got on the board.

With the win, the Rockets clinched the regular season Duck River Valley Conference title and will host the DRVC title game on September 30.

FMS hosts the Community Vikings on Thursday in the regular season finale.

“Next week at practice we will be practicing for Community, but we will also be preparing for whoever we are going to see in that championship,” Johnson said. “We want to make sure we secure that win this week and finish out the regular season undefeated and then be ready to have a big home crowd here for the championship.”