LEWISBURG — It’s been five weeks since the Marshall County Tigers last stepped foot on Preston Hopkins Field for homecoming against Hillwood, which resulted in a 45-7 victory for the … 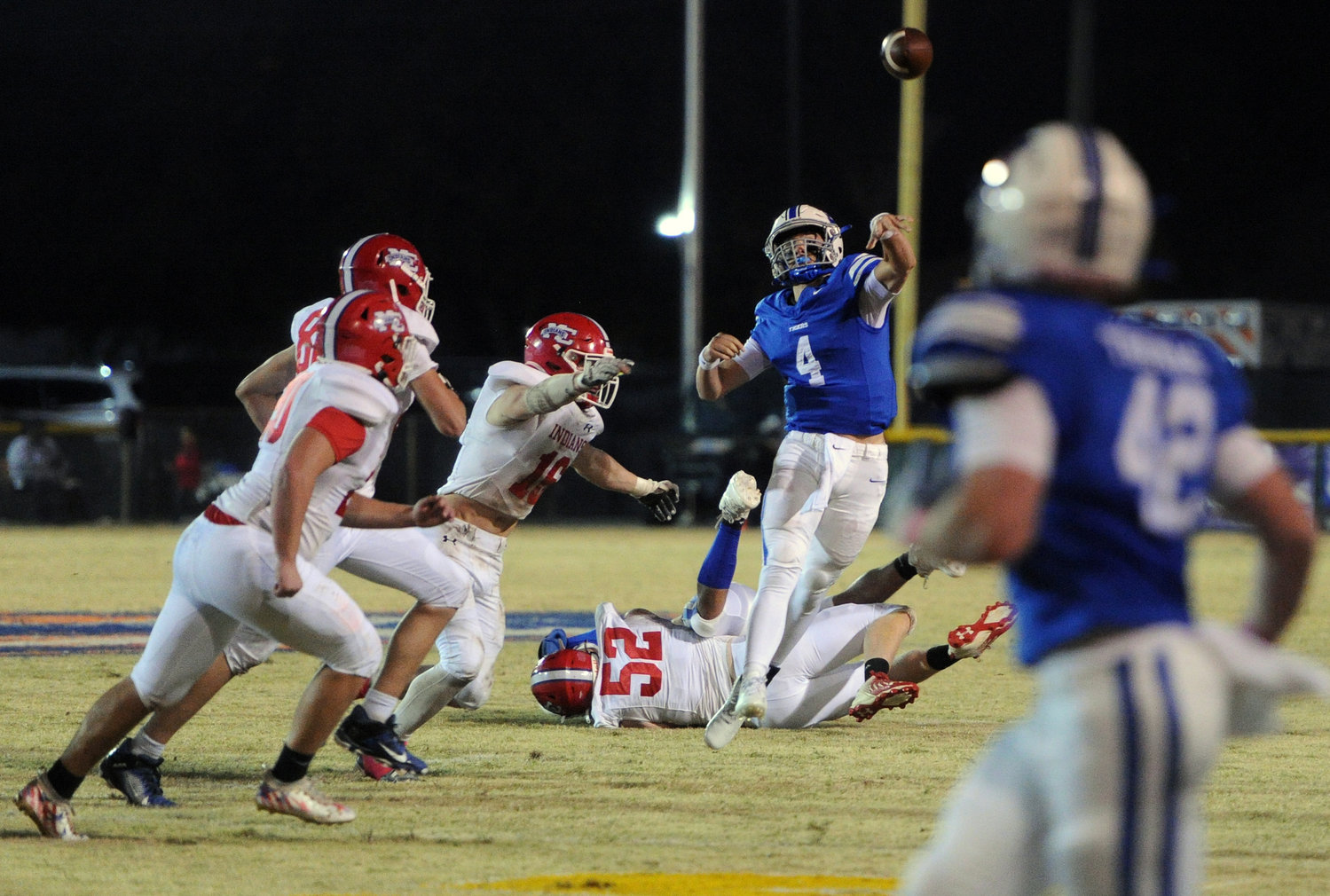 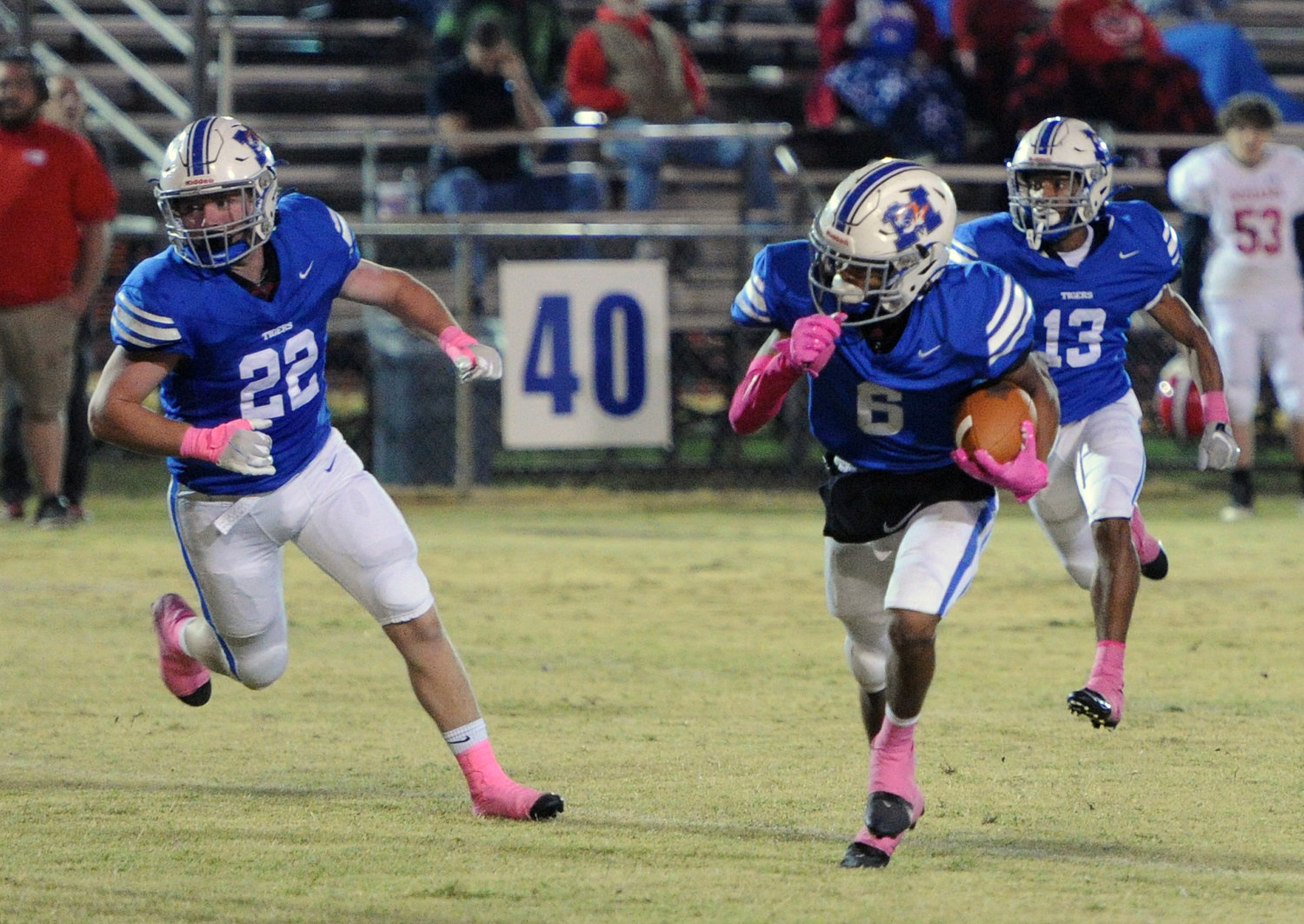 Jakavan Curry (6) turns on the jets and heads for paydirt after picking off Montgomery Central quarterback Jack Pulley on a 26-yard return.
Tribune Photo by Chris Siers 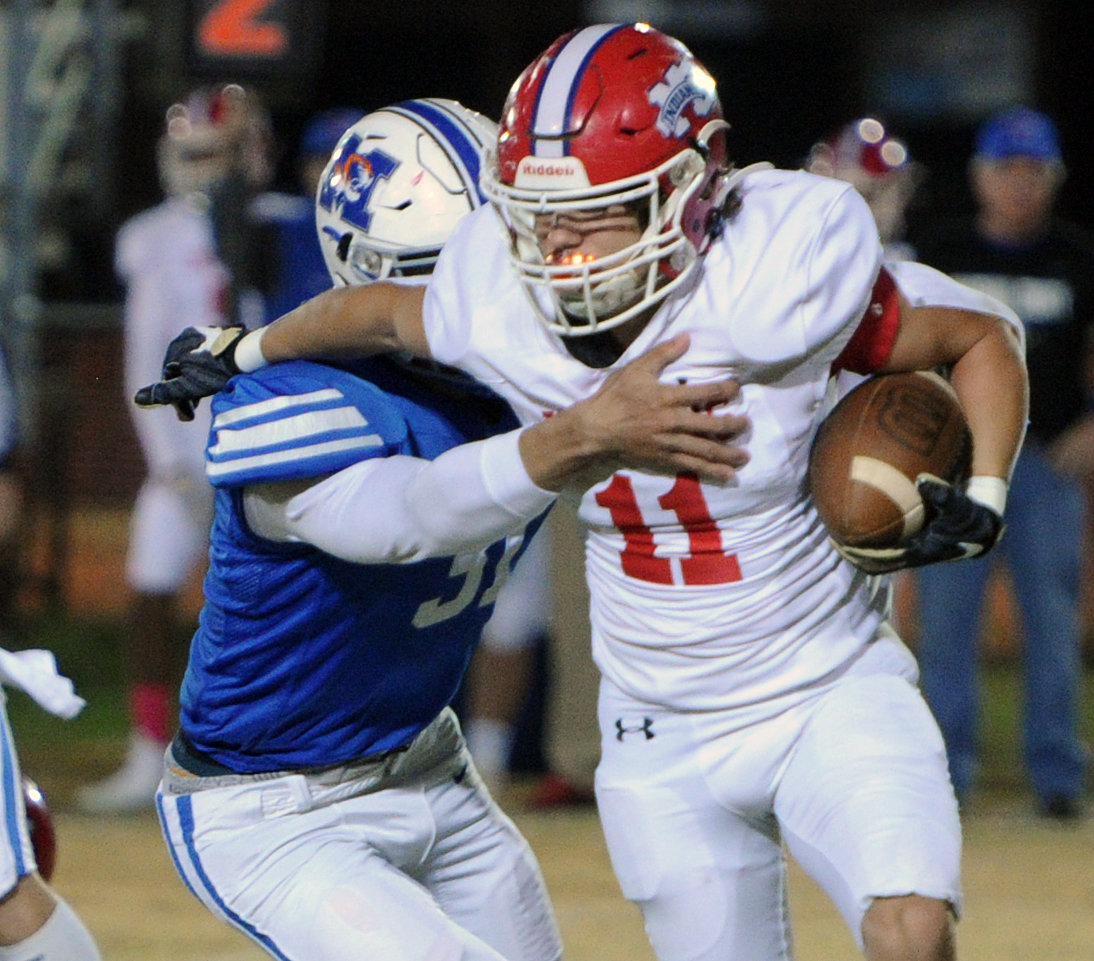 Darian Crenshaw (31) wraps up Kanyon Conner for a stop in the Indian backfield. Crenshaw also jumped on a fumble in the end zone for a Marshall County defensive score.
Tribune Photo by Chris Siers 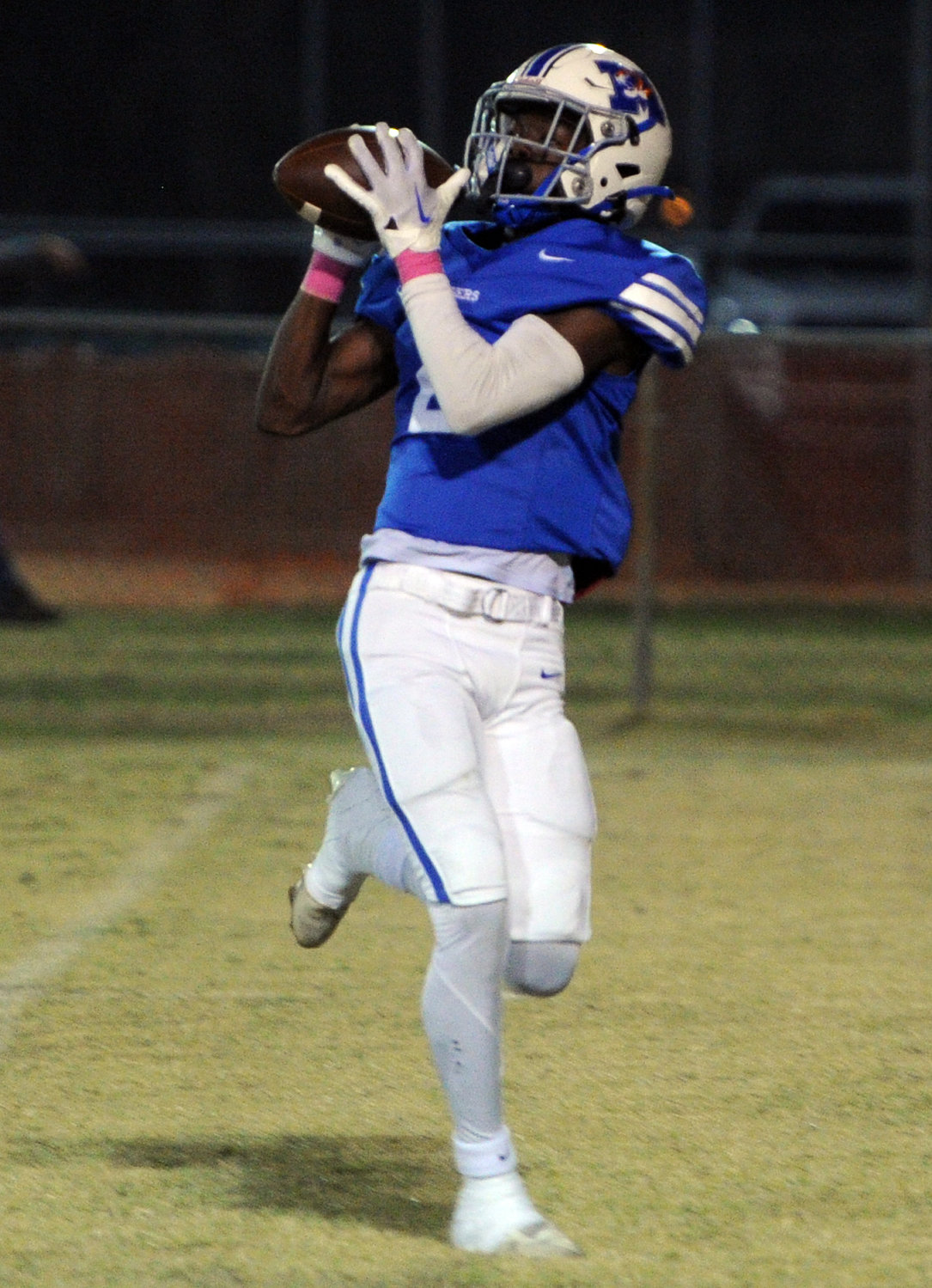 Sophomore Aja Jones hauls in a 37-yard touchdown pass from Silas Teat for the first touchdown against Montgomery Central on Friday.
Tribune Photo by Chris Siers 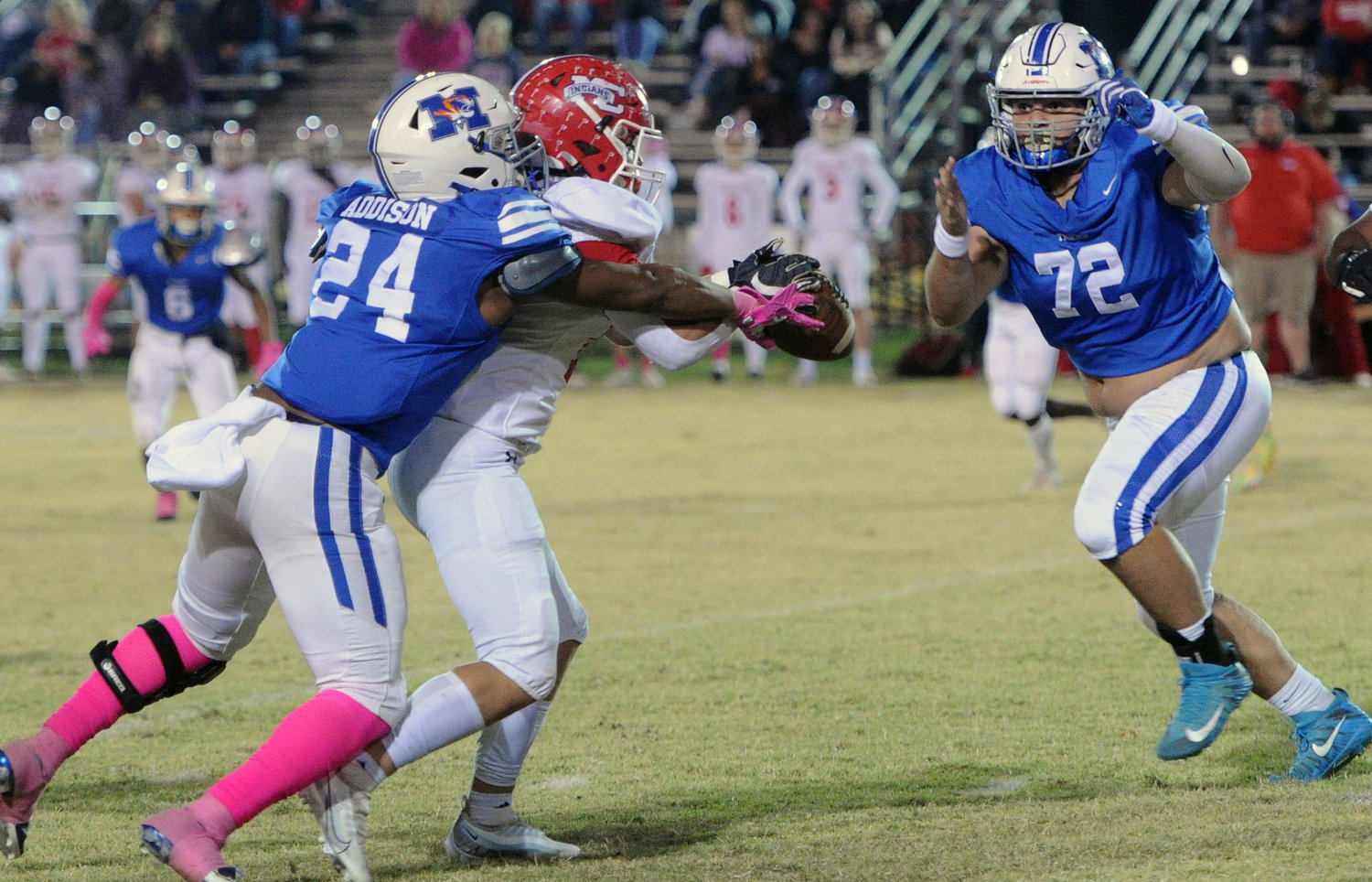 LEWISBURG — It’s been five weeks since the Marshall County Tigers last stepped foot on Preston Hopkins Field for homecoming against Hillwood, which resulted in a 45-7 victory for the Tigers.
After a month’s worth of Thursday night road games, the Tigers (8-1, 6-1) picked up right where they left off in front of the Marshall County faithful with a 56-8 thumping of Montgomery Central (2-7, 1-6).
Tiger head coach Thomas Osteen preached to his team to use each week as an opportunity to get better and that’s just what his team has done, regardless of the score or opponent.
“Our goal has been to get better each week, no matter the opponent and no matter the score. I think we used the weeks of practice and the games to get better. (I’m) happy we started fast and happy we played to our standard all night. Any time you can score in as many ways as we did, it makes you proud,” Osteen said.
Marshall County certainly had its way with the visiting Indians, with junior quarterback Silas Teat tossing four, first-half touchdown passes and the defense adding two more scores as well.
The Tigers dominated from the opening kickoff and capped the game’s opening drive on a 37-yard touchdown pass from Teat to sophomore Aja Jones.
After a three and out by the Indians, Teat again went to the air and struck with Jayden Randolph on a 32-yard touchdown pass.
With Teat answering the bell on the first two Tiger touchdowns, it was a strange sequence by the defense that landed Marshall County its third score of the quarter.
After the Indians attempted backwards lateral pass that hit the turf, Trey Warner scooped the ball and headed for the end zone.
Just before crossing the plane of the goal line, Warner was tackled from behind and Darian Crenshaw jumped on the fumble in the end zone for the third score of the opening quarter.
The Tiger offense kept churning out points as Teat tossed two more touchdown passes in the second quarter—a screen pass to Antomme Cowthorn that went 53 yards and a 30-yard dart to tight end John Morgan Thomas.
Senior Tailback Demari Braden also scored from three yards out for the Tigers’ only rushing touchdown of the night, while Jakavan Curry came up with the second defensive score on a 26-yard interception returned for a touchdown.
With a 49-0 lead at the half, the Tigers were able to work the majority of the reserves on the field in the second half and despite Indian running back Kade Davis scoring on a four-yard run with 10:51 left in the game, a pair of Tiger freshmen accounted for the final Marshall County score of the night.
Freshman signal caller Tyler Thompson connected with Kel Hightower on a four-yard touchdown pass with 4:41 left in the game.
Hightower caught three passes for 40 yards and a score, while Thompson was a perfect 4-of-4 for 41 yards in limited fourth-quarter action.
“Happy those young guys got in the end zone. Tyler Thompson, a freshman, and Kel Hightower, a freshman, both of those guys have promising futures down the road,” Osteen said.
Teat completed 6-of-9 passes for 169 yards and four touchdowns, while Braden totaled 72 yards on 10 carries and a score.
Jones caught two passes for 38 yards, while Cowthorn had the one grab for 53 yards.
Randolph also made the one grab for 32 yards, with Thomas adding one grab for 30 yards.
All four found the end zone.
Offensively, Marshall County cranked out 341 yards of offense, with 126 coming on the ground, while 215 came via the passing game.
Montgomery Central managed just 70 yards of offense against what’s been a stingy Tiger defense.
Friday night’s game marked the first time the Tigers played in front of a home crowd in a month.
“It’s been five weeks since we’ve been here. I feel like we always play well here and that’s why next week is so big. We want to win next week to see if we can get a home playoff game here,” Osteen said.
With the two-game slate to close the regular season, all eyes turn to Friday night’s regular season finale against Greenbrier because a win will secure a home-field playoff game in the opening round of the Class 4-A playoffs.
For Osteen and the Tiger program, it’s been a fun season as the regular season comes to a close this week.
Other than the hiccup at Pearl-Cohn, the Tigers have built a flawless schedule with a respectable resume.
In the previous two games, Marshall County has outscored its opponents, 125-8, and with the Tigers appearing to be playing their best football of the season, all eyes are now on Greenbrier in the finale.
“It’s the most fun bunch that I’ve coached in a long time. Anytime you’re winning, it’s fun. We’ve got a bunch of good kids and a bunch of good leadership in the senior class. I told the kids afterwords I’m selfish because I want to make this last as long as possible because that’s how much fun the coaching staff and I are having,” Osteen said.
Kickoff is set for 7 p.m. at Preston Hopkins Field.