CHAPEL HILL — The Forrest Lady Rockets’ senior class had never played in a region tournament quarterfinal until Friday at Chapel Hill where they took full advantage of the opportunity, … 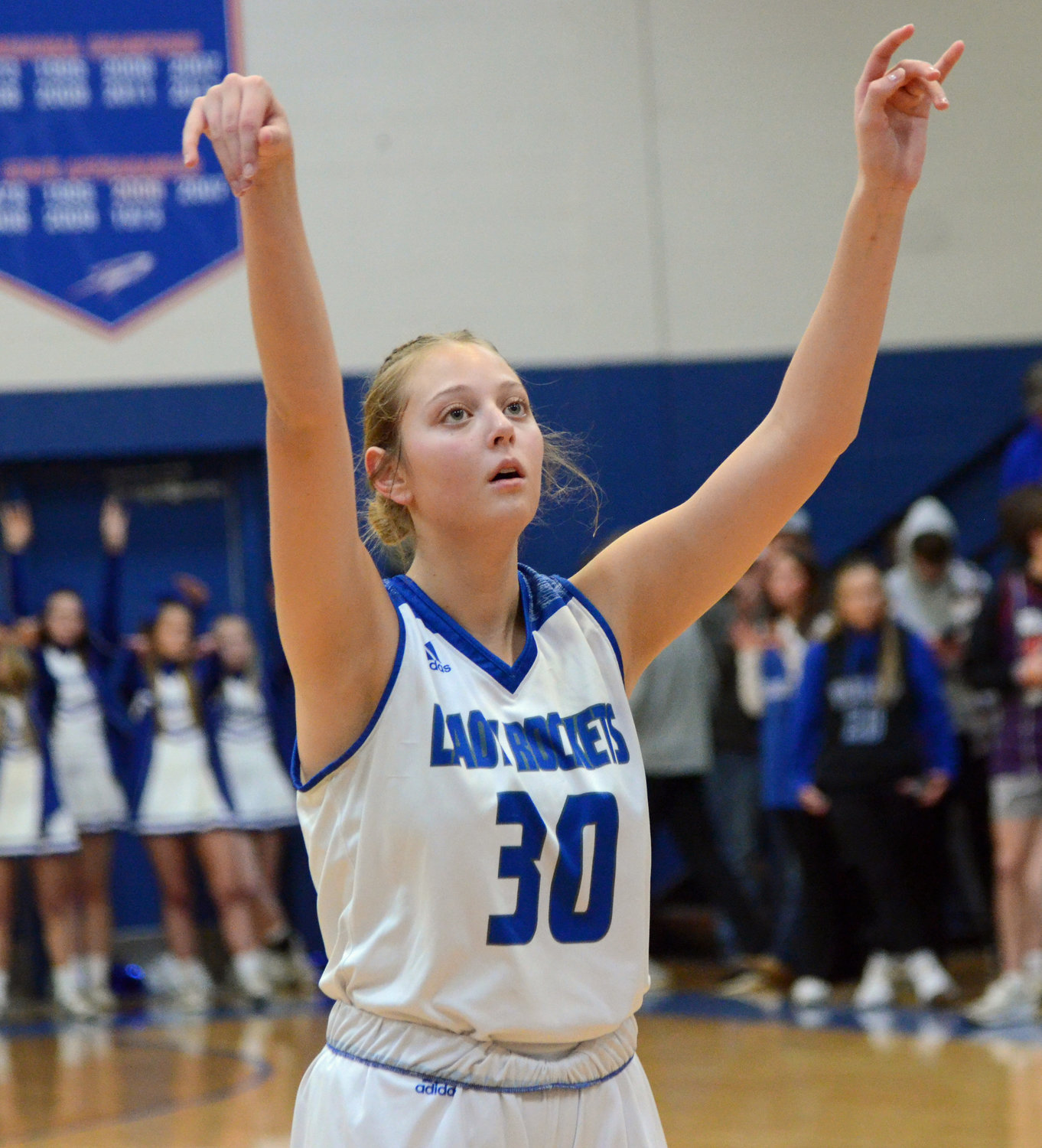 Senior Ryann Lewis was dead-eye from the free throw line versus the Lady Cobras, draining 7-of-8 from the charity stripe.
Tribune Photo by Anthony S. Puca 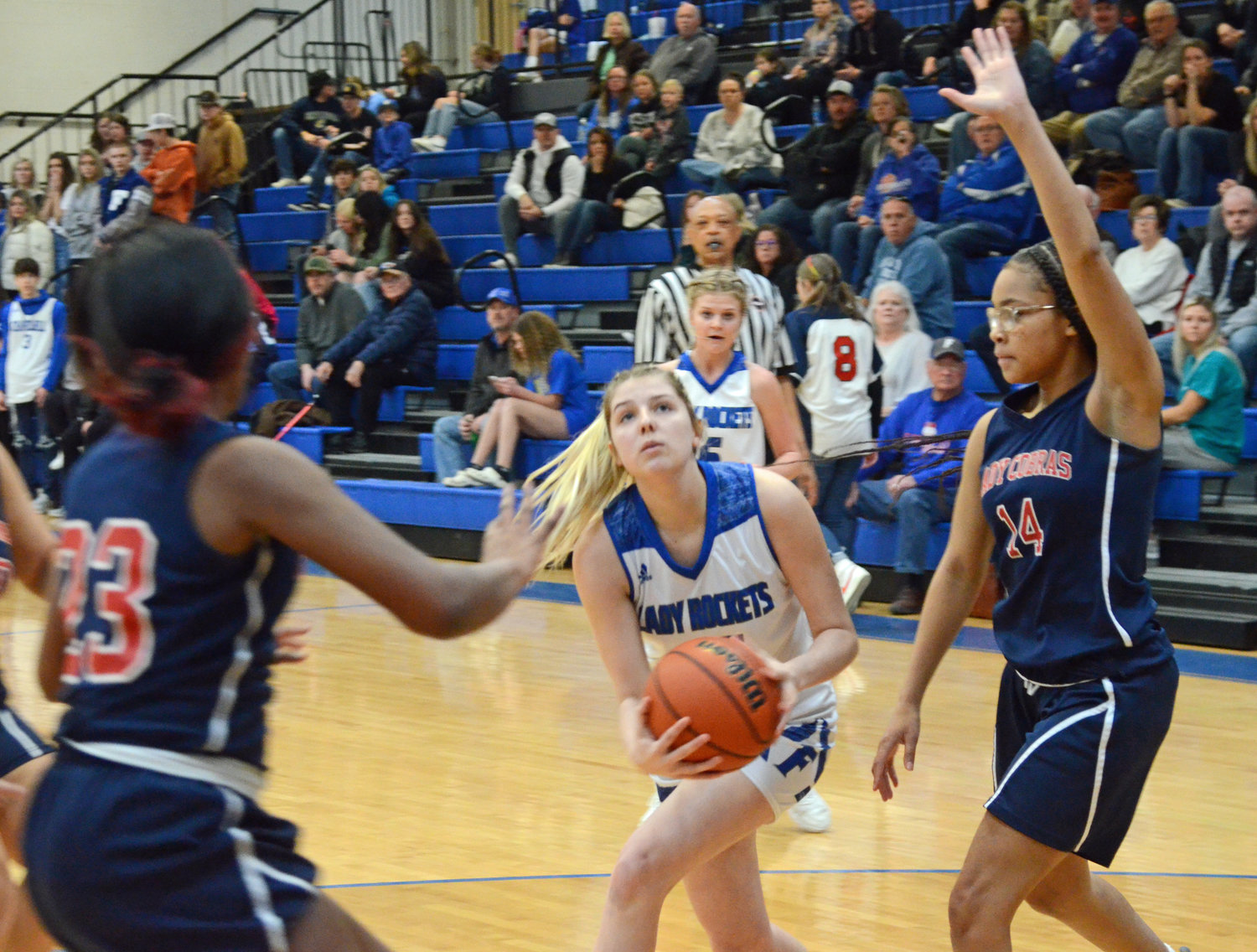 Forrest’s Megan Mealer (15) was taking the ball to the rack all night and it turned into 13 points, including a 7-for-10 effort from the free throw line.
Tribune Photo by Anthony S. Puca
Previous Next
Posted Sunday, February 27, 2022 11:15 am
By Anthony S. Puca ~ Sports Writer

CHAPEL HILL — The Forrest Lady Rockets’ senior class had never played in a region tournament quarterfinal until Friday at Chapel Hill where they took full advantage of the opportunity, pummeling the Whites Creek Lady Cobras 62-12 in the Region 4-AA Tournament.
The 50-point win was the largest margin of victory for Forrest since the ultra-lopsided 91-13 landslide over F.C. Boyd Christian School on January 19, 2010 at Chapel Hill.
“I’m more happy than anything for my two seniors in Addison Bunty and Ryann Lewis, who have never had a chance to go to the second round of the region,” Forrest coach Hal Murrell said. “If you would have told us this summer when we were playing in camp at Eagleville that we would be where we are, I would have said no way.”
The two Forrest seniors combined for 23 of the 62 points in the game, with Bunty leading all scorers in the contest with 16 points, including four 3-pointers.
Lewis scored all seven of her points in the game from the charity stripe, missing just one free throw.
Freshman Kinslee Inlow banged home four 3-pointers and a field goal for 14 points and Megan Mealer also had a solid game with 13 points and a 7-for-10 effort from the free throw line.
Macyn Kirby had five points with one long bomb and went 2-for-2 from the charity stripe.
Carli Warner knocked down a long rainbow 3-pointer in the second half and Cadence Chapman and Meagan Scaggs had two points apiece.
Forrest started the game strong and fast as they took advantage of a myriad of Lady Cobra turnovers that turned in to points at the other end.
“I had watched them play a few days ago in their district tournament and I felt like it was a team would could pressure and get some easy baskets,” Murrell said.
Bunty drilled three 3-pointers in the first quarter and Mealer had seven points as the Lady Rockets blanked Whites Creek 23-0 in the stanza.
A 10-0 run that was capped off with a Mealer rebound and put-back to begin the second period made it 33-0 when Zakiyah Meneese knocked down a 3-pointer for Whites Creek with 2:28 remaining in the first half.
Chapman came up with a bucket in the paint and Bunty picked up where she started, draining a long bomb to give the Lady Rockets a 38-3 lead at the break.
Inlow owned the third, knocking down a pair of 3-pointers and a field goal while Warner’s three gave Forrest a 55-9 lead late in the stanza.
The fourth quarter was played under the TSSAA 35-point mercy rule with a running clock as the Lady Rockets celebrated what could be their final home game of the season.
“The girls have worked their tails off and they have gotten so much better as the year has progressed,” Murrell said. “We are playing pretty good basketball right now. I know we have a tough opponent Monday night, but everybody is tough this time of year, so we have as good a chance as anybody.”
Forrest (13-14), the 2006 state champion, travels to Whites Creek Monday night to take on the third-ranked East Nashville Magnet School Lady Eagles (22-1), who crushed Grundy County 80-40 in East Nashville Friday night.
The 2016 state title holders have won 17 games in-a-row, with their only loss coming to Beech (56-46) on December 20.
“I just told the girls, they (East Nashville) have seven teams in their district, so they have played this team twice that we played, the fourth-place team, the fifth-place team, the sixth-place team, and the seventh-place twice, so about 10 of their victories came off this type team,” Murrell said. “I felt like our schedule has helped us prepare for that as far as…Huntland, Moore County, Community and I feel like we play some top-notch teams.”
“It’s gonna be a rocking atmosphere up there. It’s gonna be a different atmosphere than my girls are used to going into, so you have to give them an advantage, but at the same time if you don’t go in there and back down and go toe-to-toe with them, you never know what could happen in the fourth quarter.”
District 7-AA champs Community (23-7) destroyed Stratford 71-4 and the Pearl Cohn Firebirds (20-5) beat the Cascade Lady Champions 55-45.