CHAPEL HILL — The Forrest Rockets (2-2) went through a rollercoaster during Monday night’s non-district tilt against Giles County.After capturing an early lead against the Bobcats, … 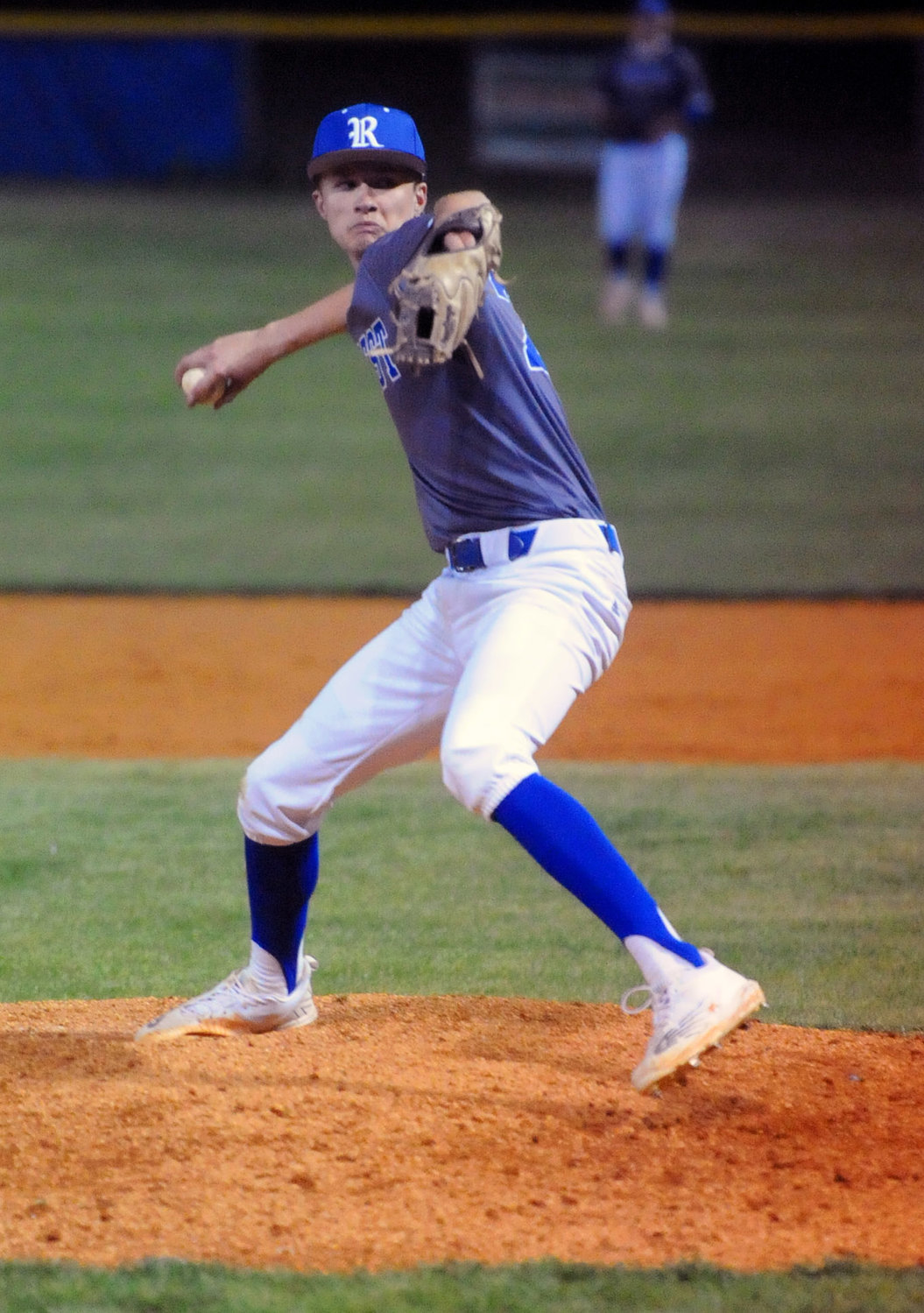 Austin Lampley delivers a pitch while working in relief against Giles County on Monday night.
Tribune Photo by Chris Siers 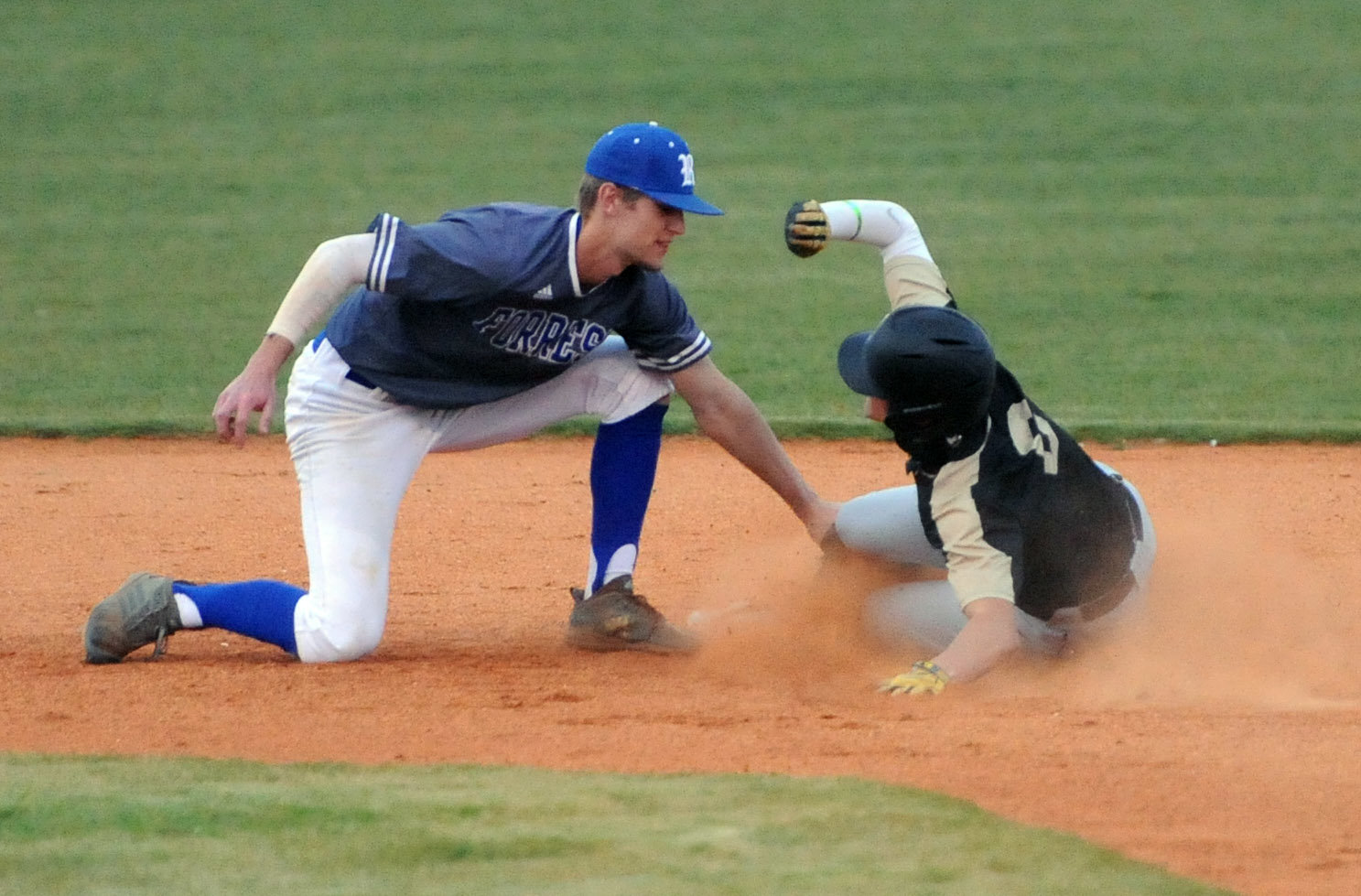 Kain Moses lays the tag on a Bobcat base runner for the out at second.
Tribune Photo by Chris Siers
Previous Next
Posted Tuesday, March 22, 2022 11:34 am
By Chris Siers ~ sports@t-g.com

CHAPEL HILL — The Forrest Rockets (2-2) went through a rollercoaster during Monday night’s non-district tilt against Giles County.
After capturing an early lead against the Bobcats, Forrest saw Giles County (4-0) rally for a 4-1 lead at one point and despite falling behind, the Rockets were able to rally and force extra innings, before falling in a decisive eighth inning, 8-6.
Starter Brennan Mealer kept the base paths clear for the first three innings and at the plate, the Rockets went right to work in the bottom of the first frame.
Camden Vaughn led off the inning with a walk and the Rockets followed with back-to-back singles by Riley Durbin and Mealer.
But Durbin and Mealer were both tagged out, with Durbin being cut down at the plate and Mealer tagged out in a run down, or Forrest could possibly have blown the game open in the first frame.
“ I’ll definitely think about those base running mistakes. Part of that is on us as a coaching staff to make sure the guys know what the situation is and they know what they’re supposed to be doing out there. I am proud of the guys’ effort for battling back and getting back into the game on multiple occasions. That’s a good team in Giles County. They swing the bat well. This is the kind of competition we needed going into the district schedule,” Rocket coach Andy Burkett said.
Forrest had another blunder on the base paths in the second inning as well.
Preston Gentry connected on a one-out single to right and advanced to second base on a passed ball, but was cut down at third by the Bobcat defense.
Mealer responded and sat down the Bobcat battery in order in the top of the third inning.
It wasn’t until the fourth inning that Giles County finally got the bats working and scored on a RBI infield single.
The visitors pulled ahead with a three-run fifth inning on a two RBI single to center to give Giles County a 3-1 lead.
The Bobcats got a third run of the inning on a sac-fly to left.
Forrest got one of those runs back in the bottom of the fifth inning with some savvy work by Vaughn, who led off the inning with a second walk of the night.
He advanced to second base on a Bobcat error and reached third on a passed ball.
Braden Bowyer later scored the run when he ground out to first.
Giles County struck back with a fifth run in the top of the sixth inning and despite giving up a pair of hits, reliever Austin Lampley was able to minimize the damage and left two runners on base.
Forrest continued to get key production from Vaughn at the plate when he mashed a two-out base-clearing double, pulling the Rockets within one.
Down to their final three outs, Mealer led off the seventh with a single to right.
Forrest went on to load the bases when Bowyer reached via error and Kain Moses connected on a one-out single.
Preston Gentry plated the tying run when he ground into a fielder’s choice, but Forrest was unable to plate the winning run in regulation and left two runners on base.
While the Rockets were able to rally and force extra innings, Giles County took advantage in the eighth inning and went to knock three more runs in.
Forrest got one final run in the bottom of the eighth when Mealer scored on a Bobcat error, but couldn’t finish the rally.
The Rockets connected on seven hits in the game and were led by Vaughn who went 1-for-2 with a double and two RBIs.
“The guy is a table setter, when it comes to swinging the bat and taking effective at-bats. That guy (Vaughn) is such a tough out. He manages to find a way to get on base, whether it’s drawing walks, getting hit by pitches or finding a way to swing the bat, he’s about as effective as they come at the top of the lineup,” Burkett said.
Durbin and Mealer added a pair of singles as well.
Mealer got the start and pitched a flawless first three innings before the Bobcats were able to adjust at the plate. He went four innings and struck out five. He gave up one run and allowed two walks before Burkett turned to Austin Lampley in relief.
Lampley worked three innings in relief and recorded three strikeouts and despite being tagged for six runs, kept the Rockets within striking distance.
“He (Lampley) did a great job. He got a limited amount of work last week. To see him get an extended relief role tonight was good. I thought he was throwing the ball well. If a couple of situations go differently, it could be a completely different ballgame,” Burkett said.
Forrest looks to even the series this evening at Giles County before closing the week with games at Eagleville and at home against Lewis County.