For the second time in three days, the Community Viqueens had Forrest on the ropes as they held a 9-8 lead with two outs in the bottom of the seventh inning, only to see the Lady Rockets pull out the … 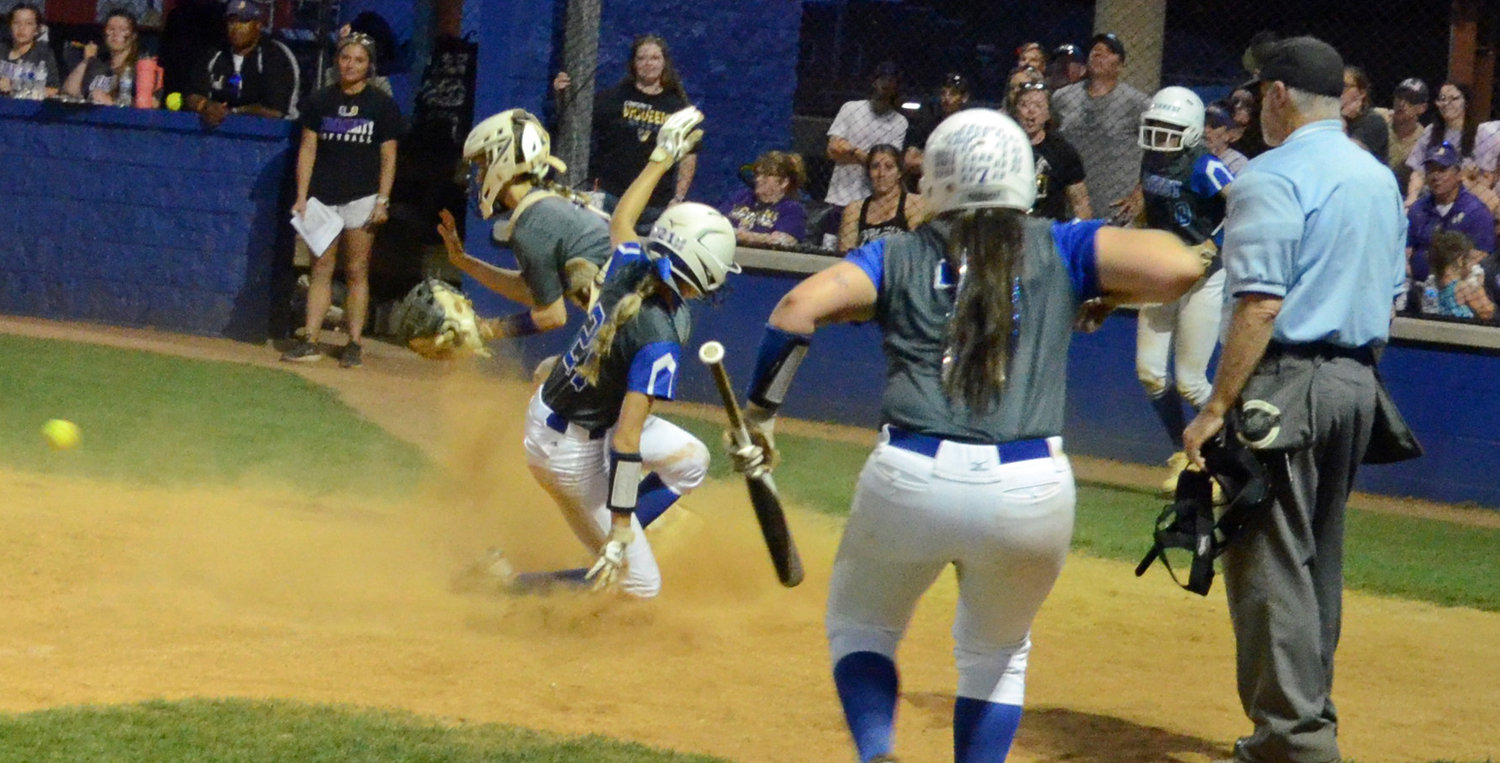 Maggie Daughrity scores the winning run for the Lady Rockets, who came back to beat Community 10-9 in Thursday night’s District 7-AA Tournament title game at the Field of Dreams in Chapel Hill.
Tribune photos by Anthony S. Puca 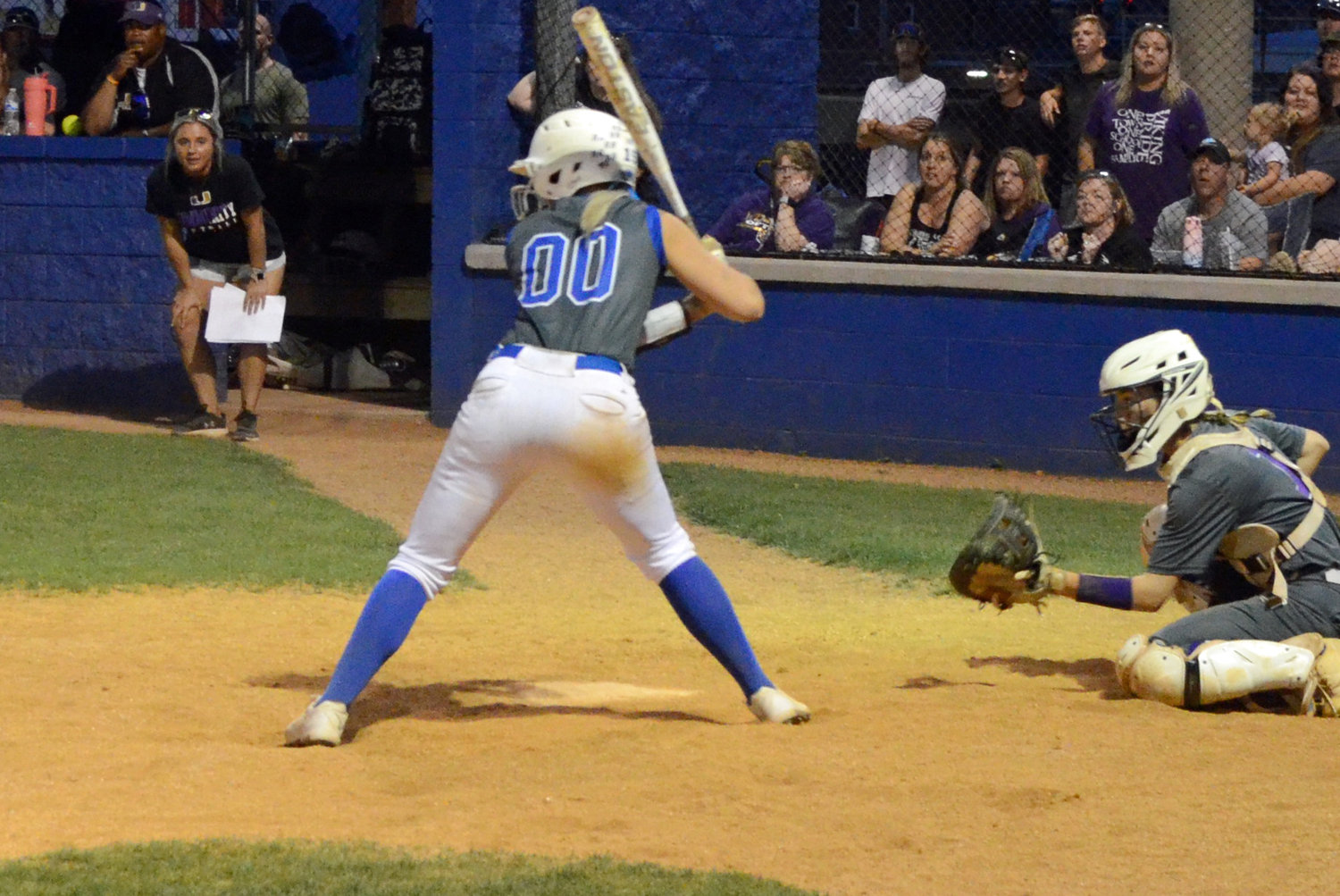 Abby Ferguson gets ready to deliver the game winning hit in the bottom of the seventh inning with two outs. 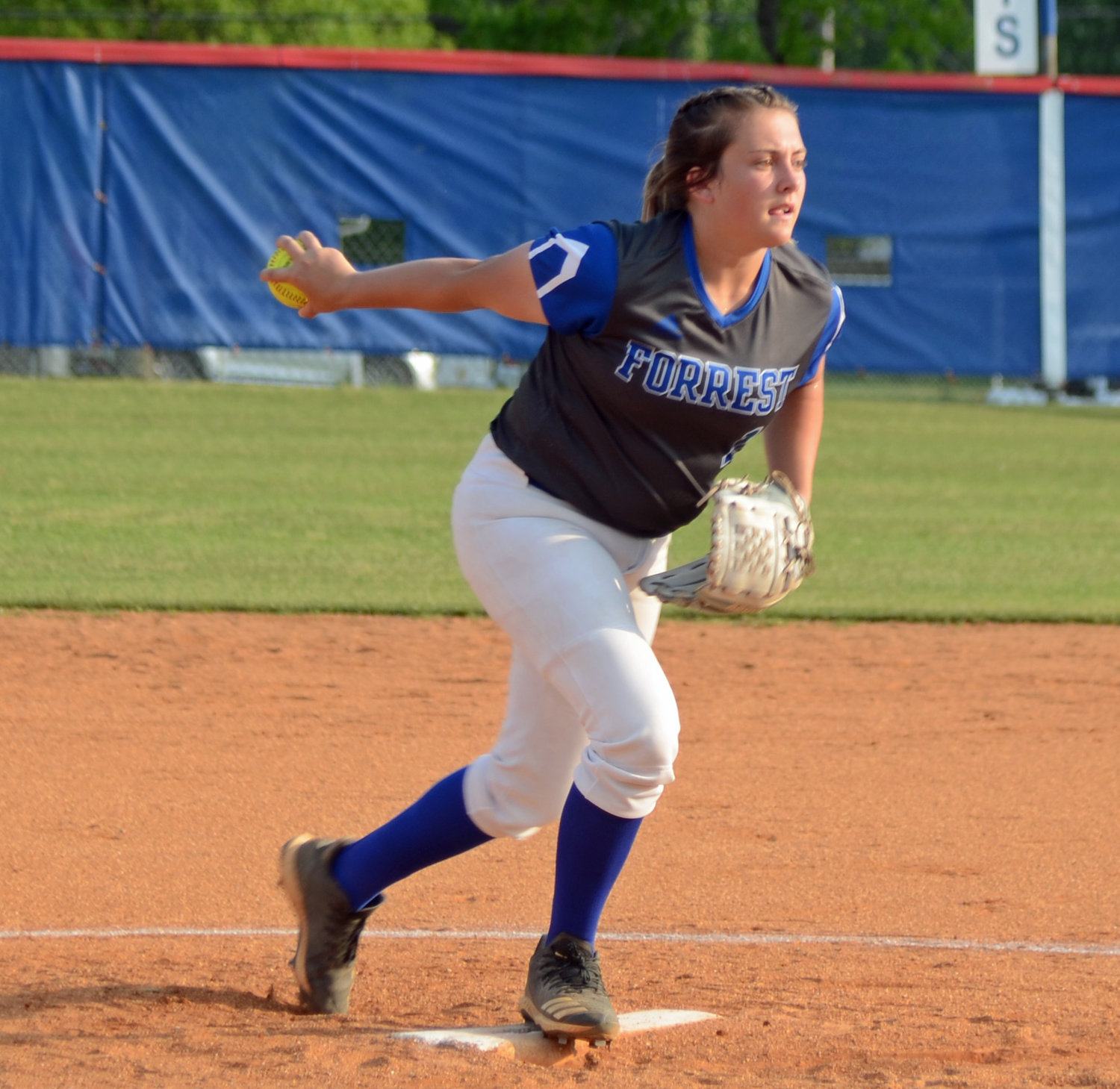 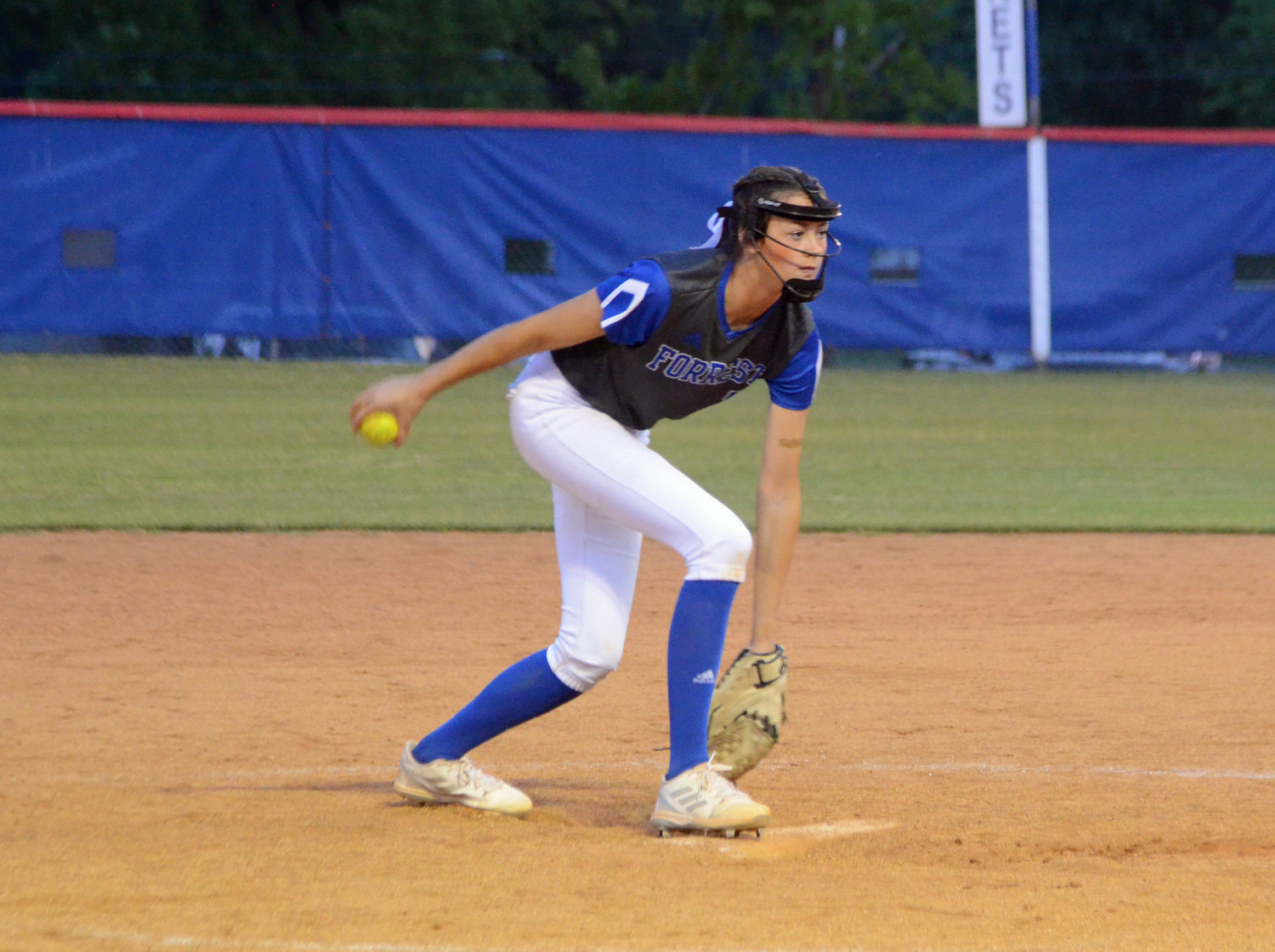 Freshman Ella Chilton picked up the win in the circle for the Lady Rockets. 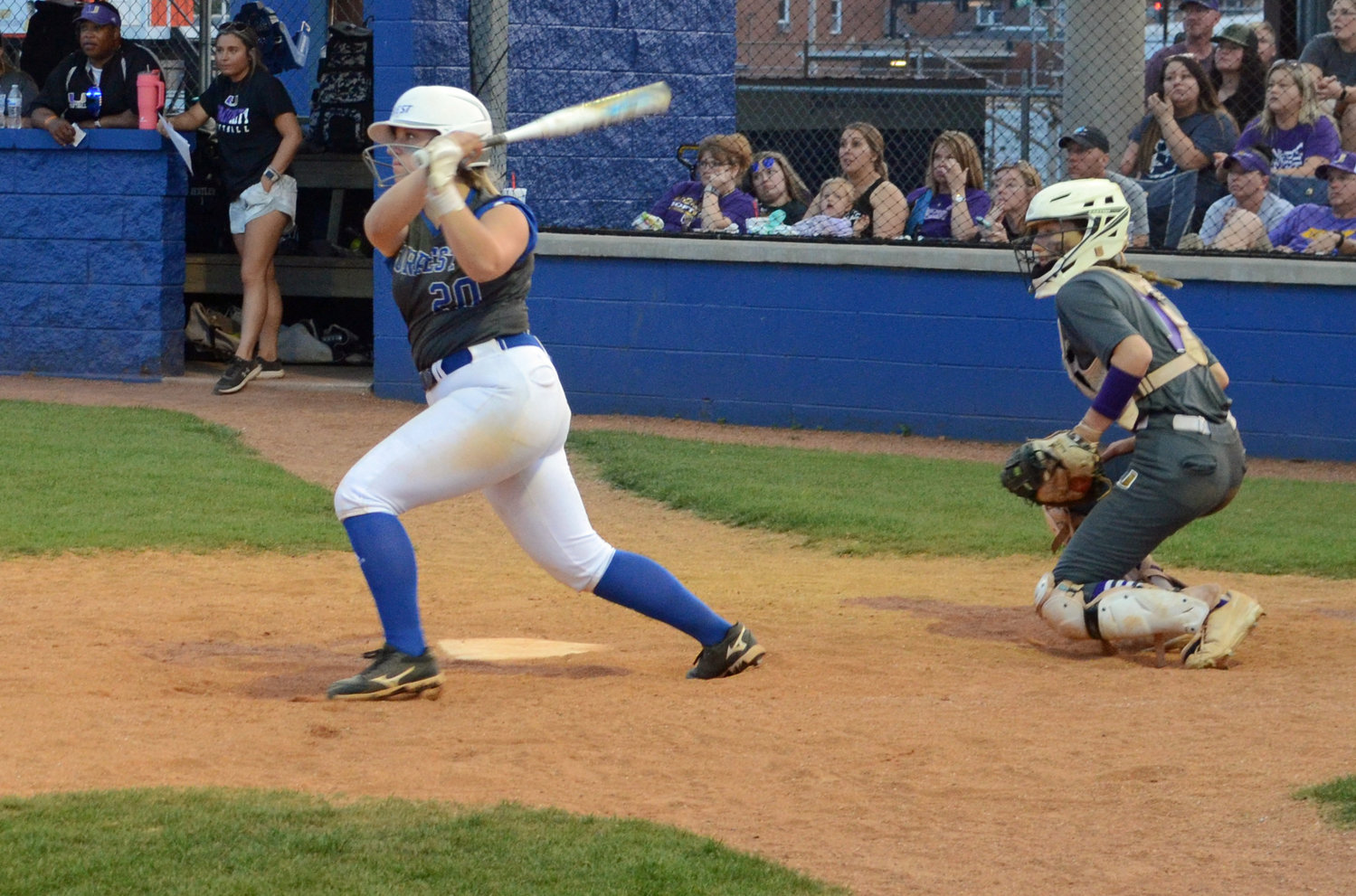 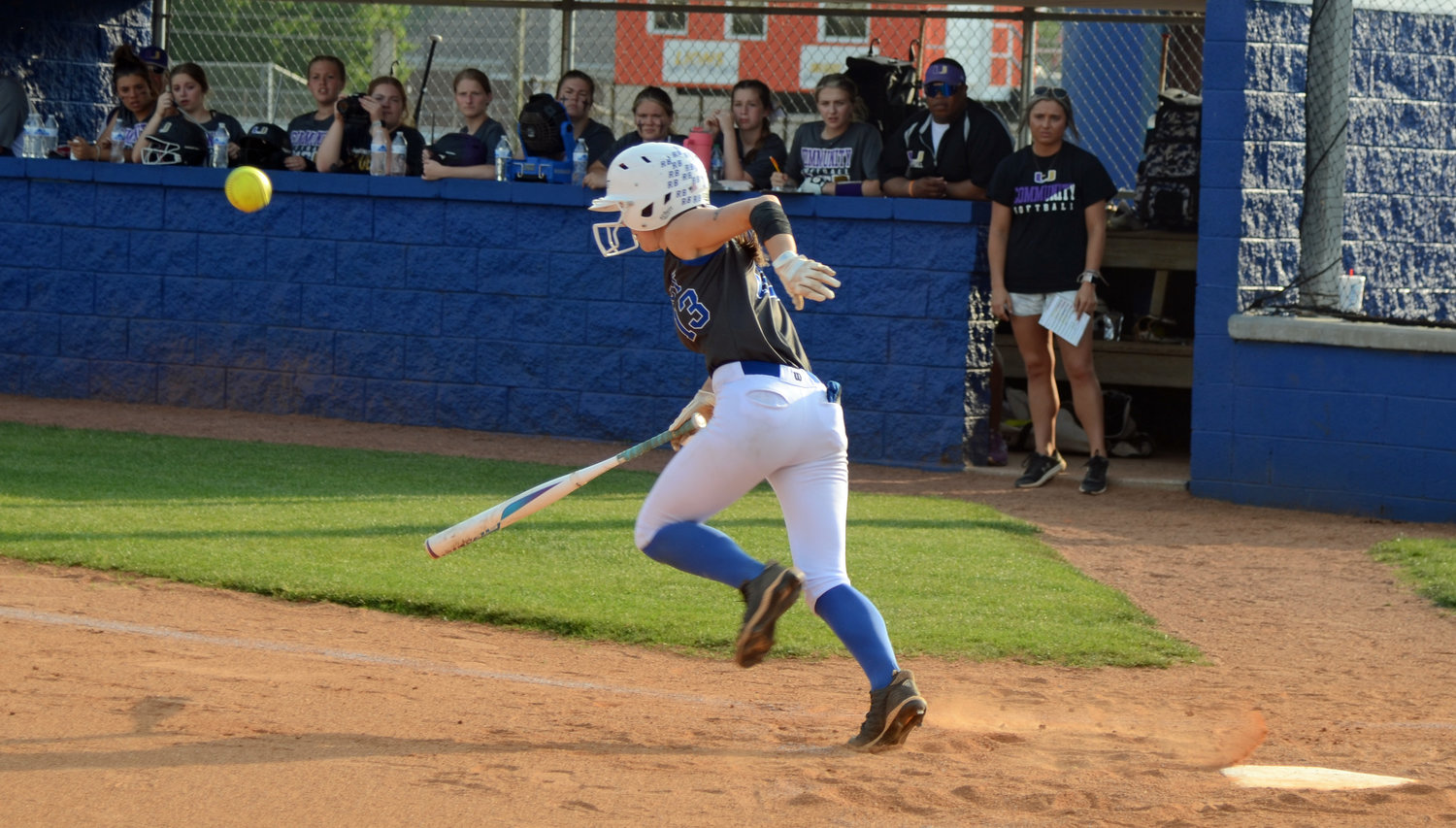 Addi Bunty lays down a perfect squeeze bunt RBI in the first inning. 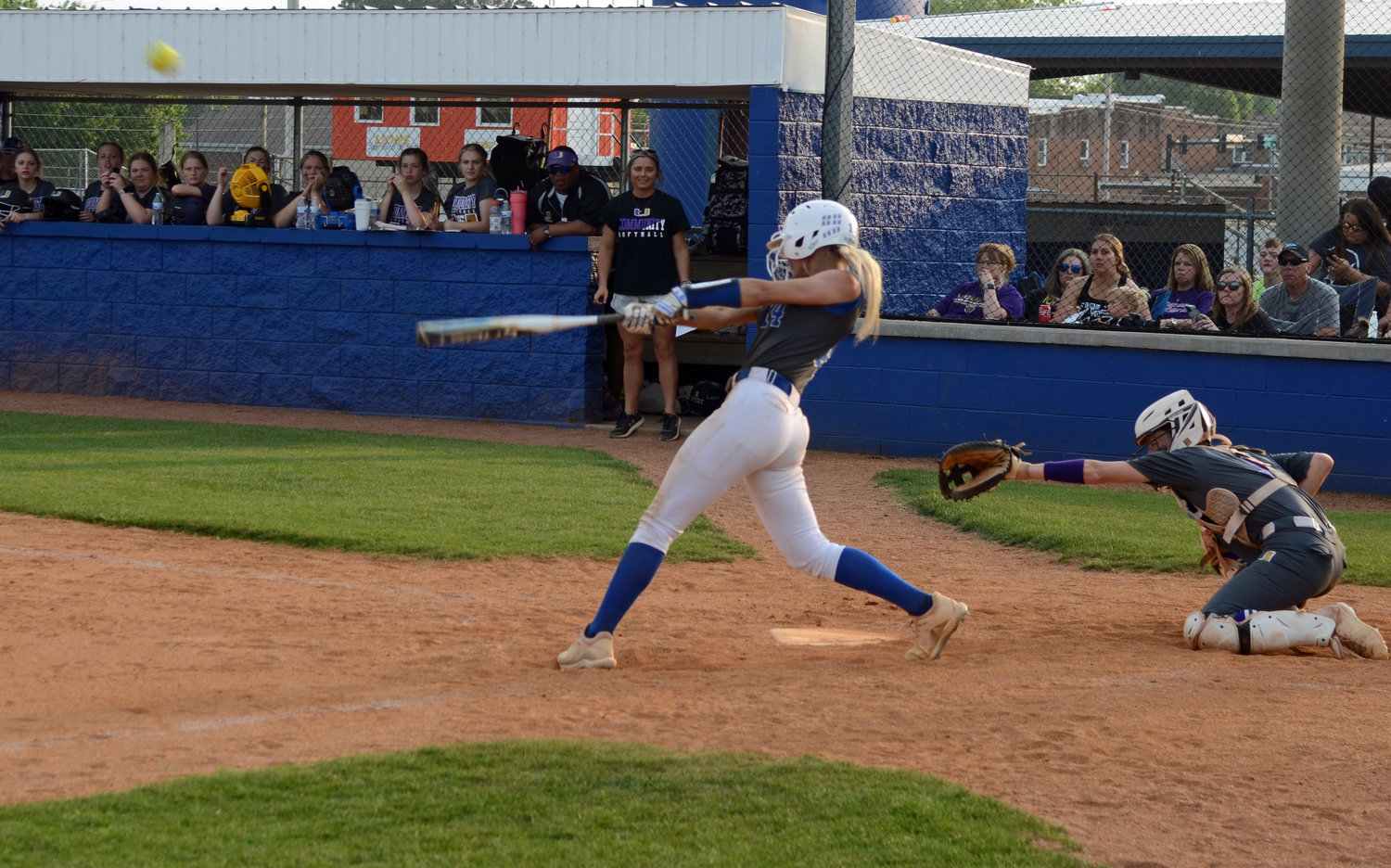 Briley Burnham singles to center field to make it a 4-2 ballgame in the fourth inning. 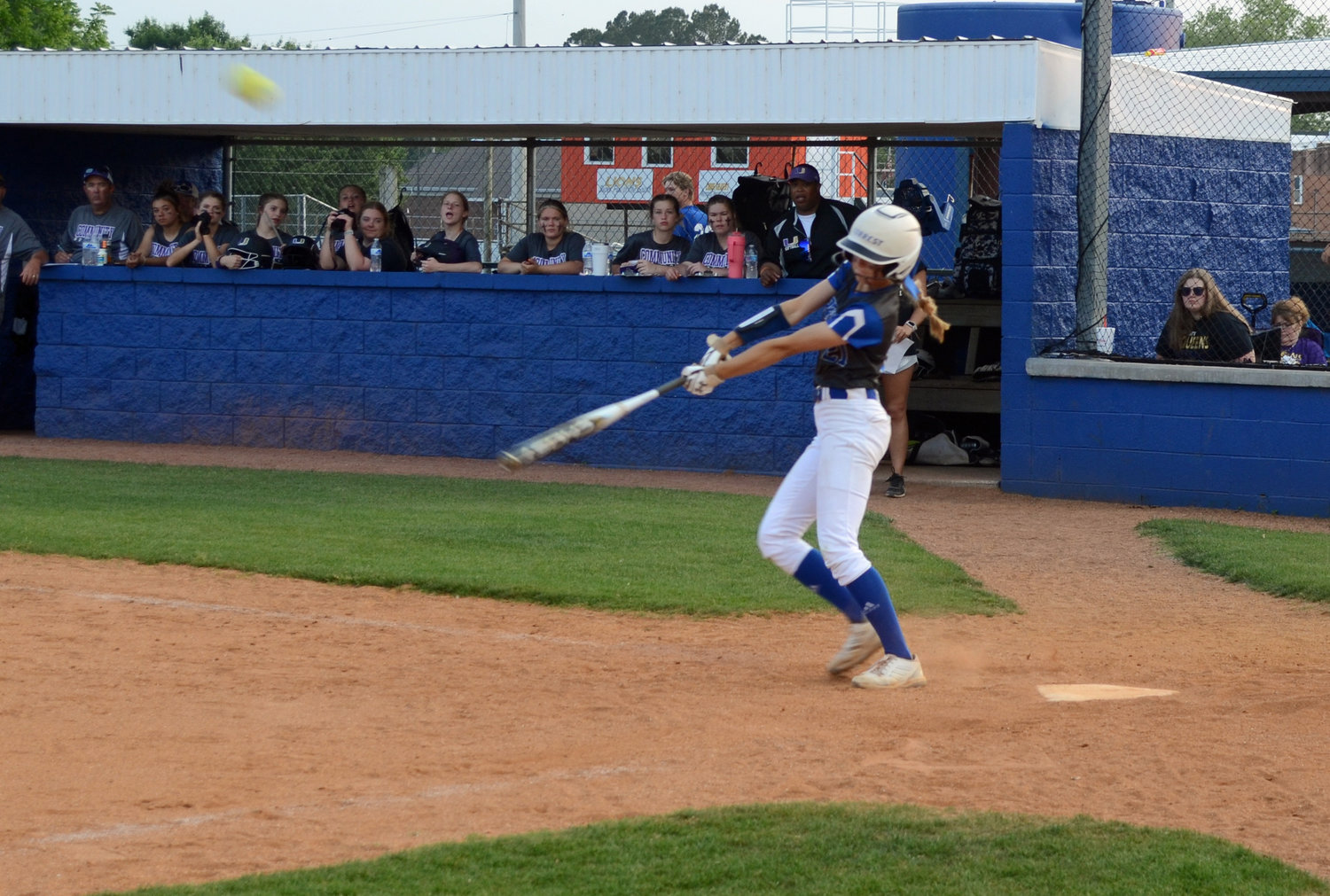 Maggie Daughrity knocks a sacrifice fly RBI in the fifth inning to make it 7-4. 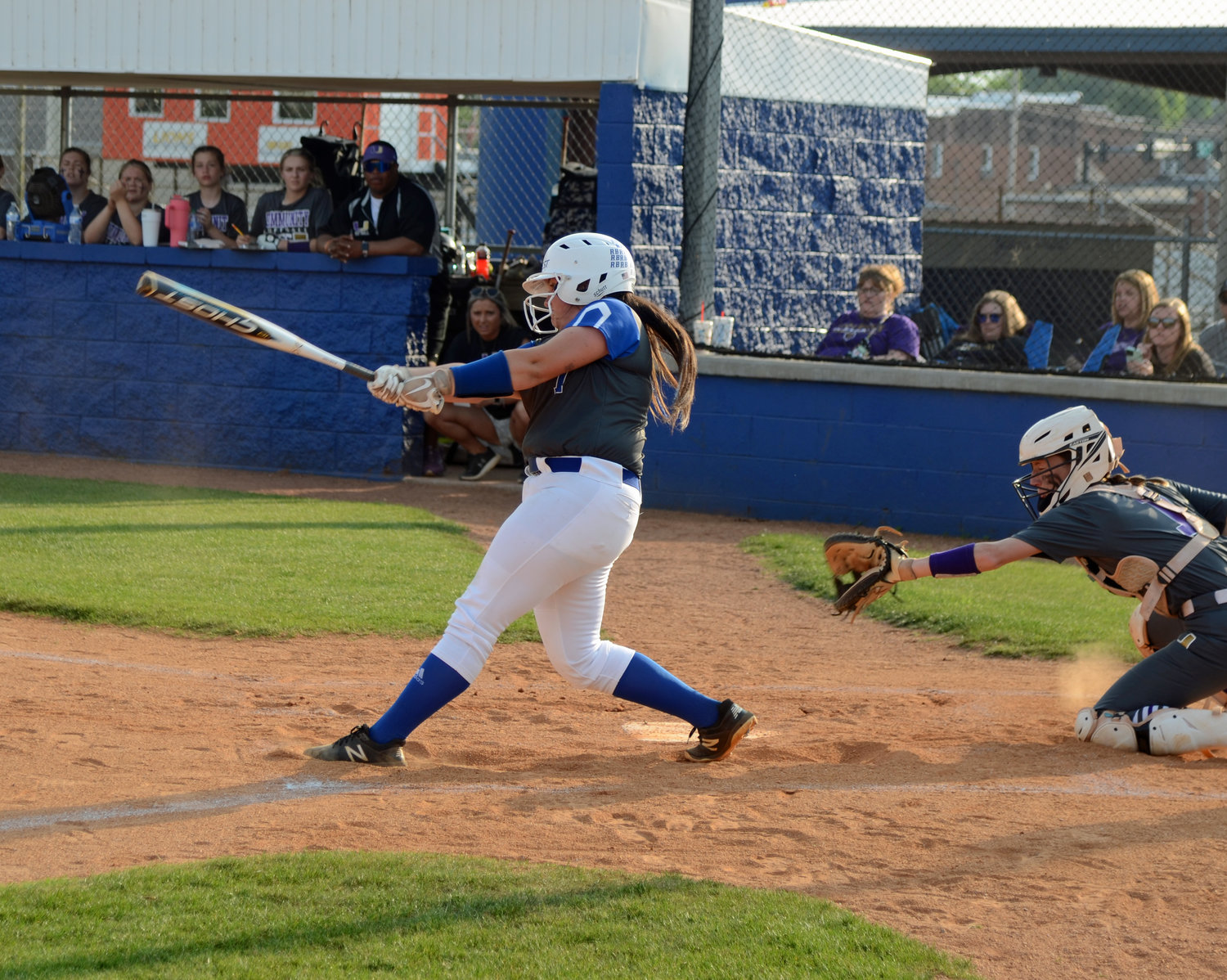 Carli Warner drives in a run to open the scoring in the bottom of the first inning. 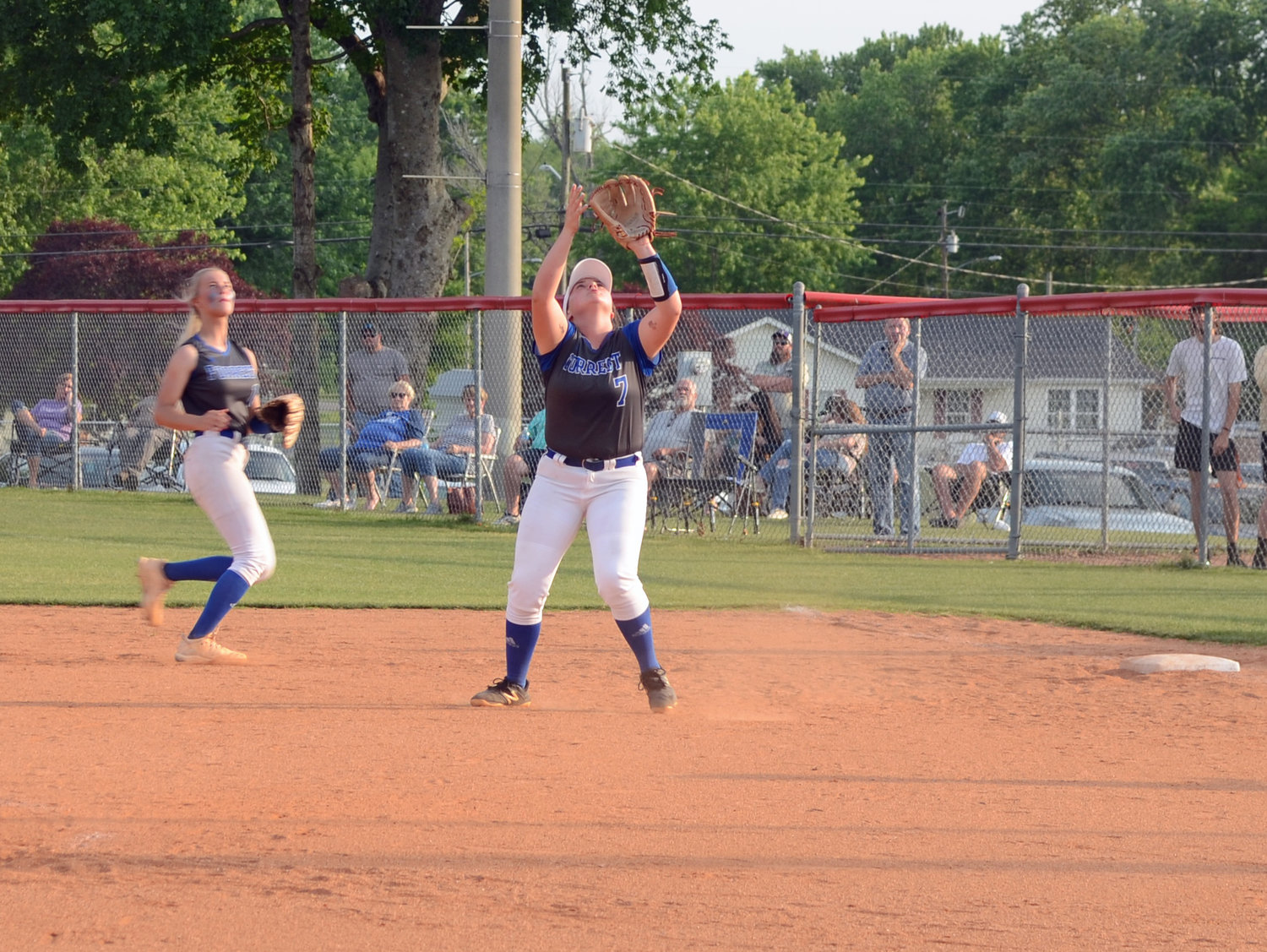 Carli Warner gets ready to catch a pop-up at first base in the third inning. Parker Wales drives in a run in the fifth inning for Forrest. 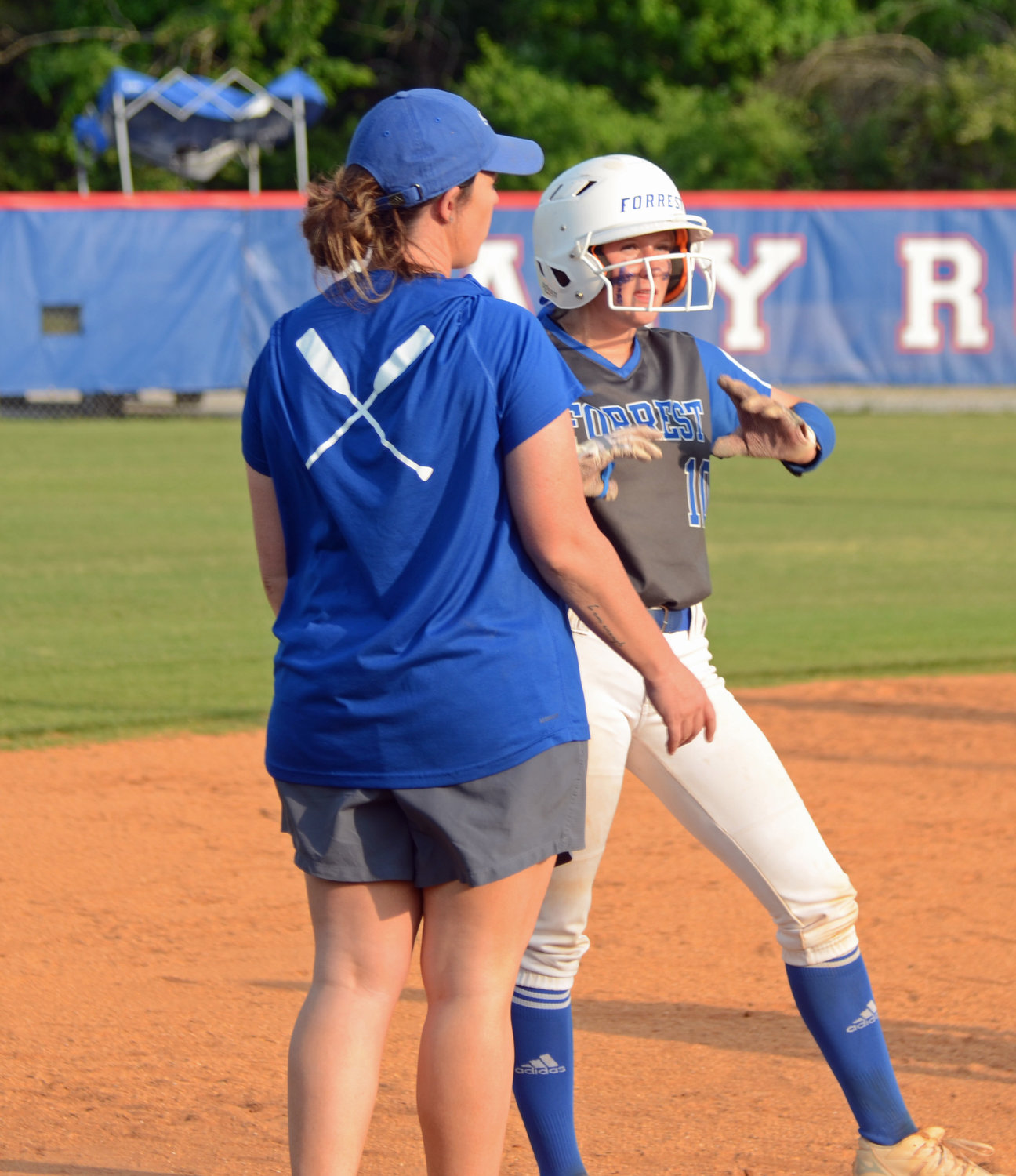 Parker Wales talks with Forrest coach Shelby Lightfoot at third base before scoring in the second inning. 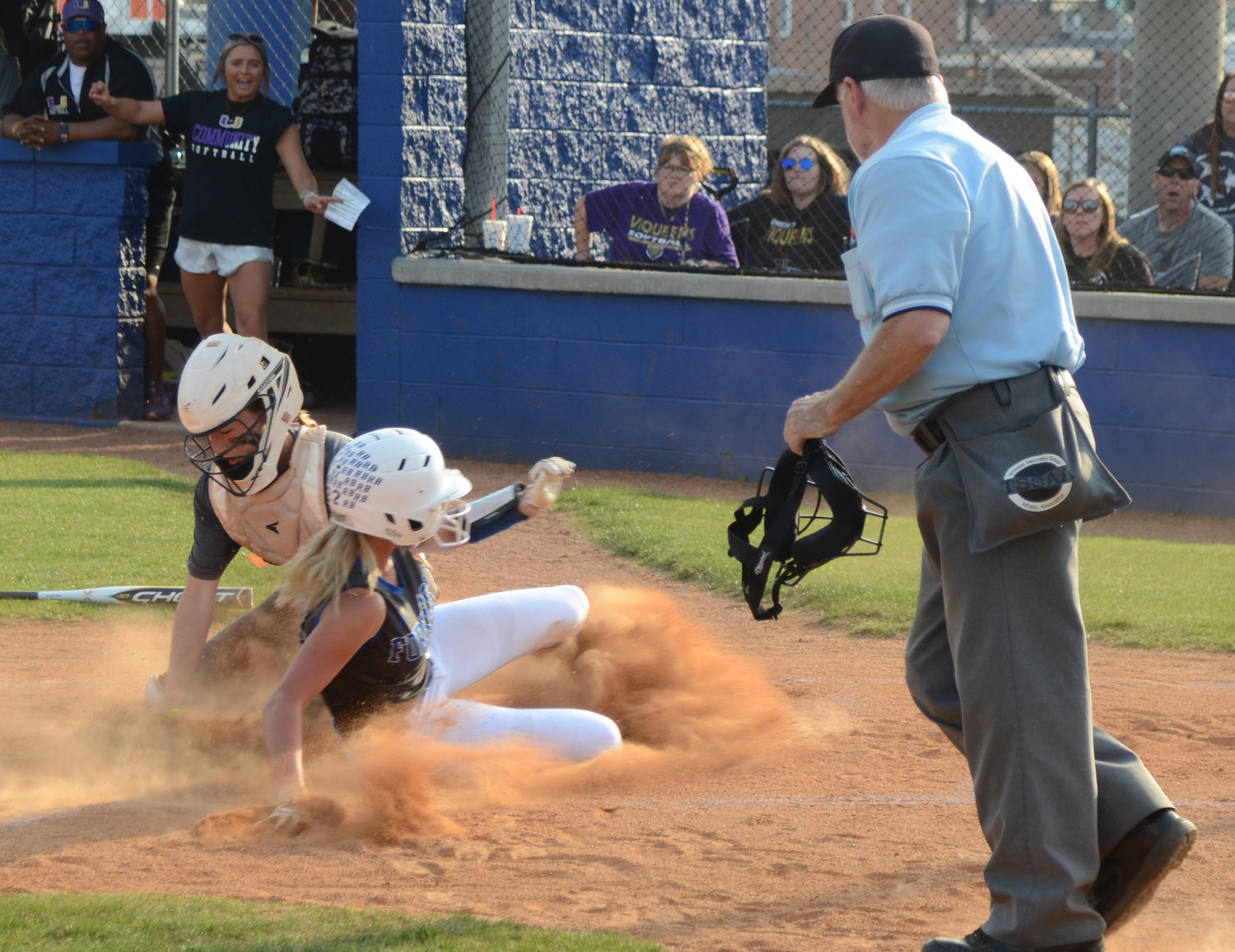 Macyn Kirby slides home in a cloud of dust to give Forrest a 1-0 lead. 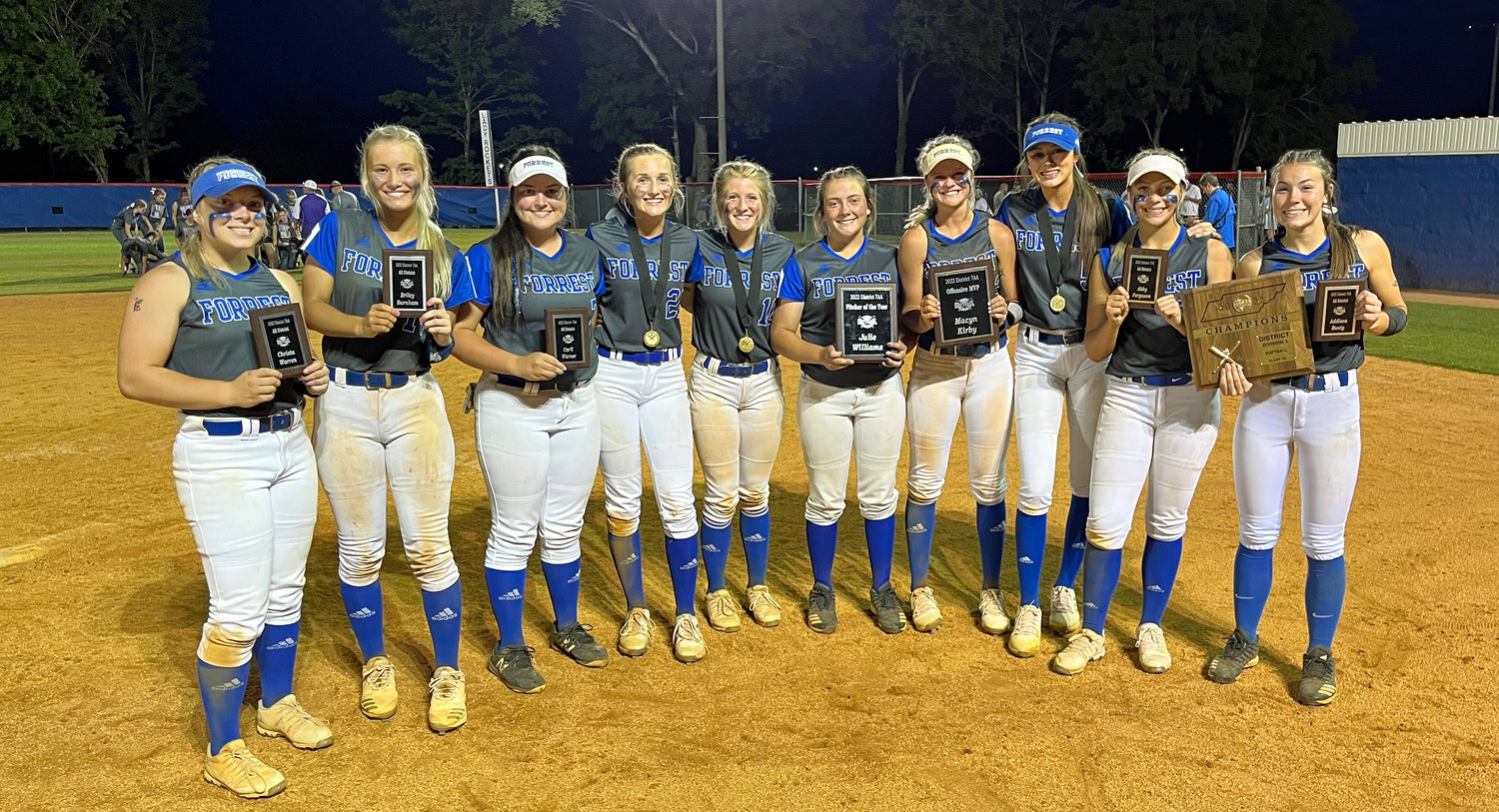 For the second time in three days, the Community Viqueens had Forrest on the ropes as they held a 9-8 lead with two outs in the bottom of the seventh inning, only to see the Lady Rockets pull out the win as sophomore Abby Ferguson delivered a two-out, two-run walk-off single to secure the District 7-AA Tournament title.

“At this point of the year it doesn’t matter how you win, it just that you get to win,” Forrest coach Shelby Lightfoot said. “That is kind of where we are at at this point, so we are going to take that tonight and go home happy with it.”

Julie Williams displayed true grit in the circle for Forrest, who didn’t exactly give the junior hurler all the help she needed as the defense uncharacteristically committed six errors in the field.

“We are kind of going downhill on that (errors), I think we are just rushing, I think it is just that little bit of pressure, so we just have to stay in the moment,” Lightfoot said. “Our bats in the moment are doing well, our bats are handling the pressure, but our defense isn’t so we have to clean that up.”

Williams, who wasn’t feeling well the entire contest, gutted out 6.1 innings, giving up 8 runs (5 earned) on 10 hits while striking out five and walking three Viqueens’ batters before giving way to freshman Ella Chilton.

“Julie didn’t feel the best tonight and we kind of knew that going in, so towards the end of the game we could tell she wasn’t feeling well and not hitting her spots as good,” Lightfoot said. “Ella came in in a tough situation and gave us plays to make, we just didn’t make them, but other than that, Ella did a great job coming in.”

Chilton came to the circle with the bases loaded and one out in the bottom of the seventh inning with Forrest in front 8-5 and gave up a two-out, RBI single to Chloe West.

A wild pitch made it 8-6 before a double error on a ground ball sent three more Community runners to the plate, putting the Lady Rockets in a 9-8 hole.

Forrest are four-time state champions and runners-up four times and they grow up dealing with pressure situations and a belief that they will prevail.

Community pitcher Haley Farrar got the first out in the bottom of the seventh inning on a pop-up to shortstop before issuing back-to-back walks to Parker Wales and Maggie Daughrity.

Macyn Kirby ripped a single to center field to load the sacks before Farrar struck out the next Forrest batter, moving to within one out of breaking a 50 consecutive game losing streak to the Lady Rockets and forcing a second title game.

Abby Ferguson stepped in and stepped up in a big way, lacing a two-strike pitch to right field that scored both Wales and Daughrity to seal the district tournament title.

“I was trying not to let the pressure get to me because usually I do, but I knew we had two outs and that’s all the time we had left,” Ferguson said. “I was just staying focused and not letting the pressure get to me. I was so happy, I didn’t know they both scored at first, but then I saw everyone cheering so I knew we won and it all worked out good.”

The two squads battled the entire game as Forrest built a 3-0 lead after two innings, scoring a pair of runs in the top of the first on a fielder’s choice RBI by Carli Warner and squeeze bunt RBI by Addison Bunty.

Forrest manufactured a small-ball run in the top of the second as Wales led off with a base on balls and went to second and third on two consecutive wild pitches.

Daughrity knocked Wales in on a grounder to second to make it 3-0 before the Viqueens made it a one-run game in the top of the third inning as Forrest committed three errors in the frame.

The Lady Rockets got one run back on another squeeze play that scored Kirby from third on a perfectly placed bunt by Ferguson.

Haley Mitchell ripped an RBI double in the top of the fourth inning for Community as they kept hanging around.

The red-hot Leslie Bartoli led off the bottom of the inning with a base hit and Emory Hall came on to run for the Forrest designated player.

Consecutive bunt safeties by Briley Burnham and Wales loaded the sacks before Hall scored on a fielder’s choice RBI by Wales, followed by a sacrifice fly by Daughrity to make it a 7-4 contest.

Both teams scored one run apiece in the sixth inning before Forrest’s seventh inning comeback win moved them to within striking distance of a 19th state tournament appearance.

The Lady Rockets host District 8-AA runner-up Whites Creek in the Region 4-AA Tournament on Monday at the Field of Dreams in Chapel Hill with the first pitch scheduled for 5:30 p.m.

“Home is big, that’s your comfort, that’s your level,” Lightfoot said. “Now we just have to relax a little bit because I feel like we are uptight under the pressure and not performing well, so we have find a way to perform under that pressure better.”

The Viqueens (23-10-1) travel to D8-A champion East Nashville in Monday’s opening round.

A win Monday night sends the Lady Rockets to Wednesday night’s region title game and secures a spot in the state sectional round on Friday.

Spring Fling XXIX begins on Tuesday, May 24 at Starplex and McKnight Park in Murfreesboro.