Colvin excelling on the pitch and in the classroom 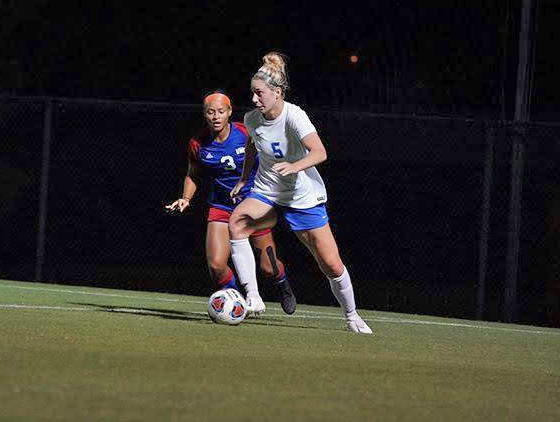 Brynn Colvin (5) battles a defender for the ball during her stellar junior season.
Photos submitted 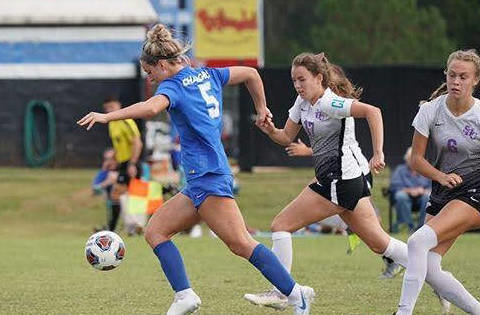 Forrest grad Brynn Colvin (5) races away from a defender during the 2019 season at the University of Alabama-Huntsville.
Previous Next
Posted Monday, November 25, 2019 11:00 pm
By Mike Inglsbee Tribune Correspondent

From an early age, former Forrest High soccer star Brynn Colvin had a feeling the sport would take her places.

Now a junior in college and the top player for Division II University of Alabama at Huntsville, all signs are pointing towards Colvin making the right decision to pursue soccer over basketball at a young age.

"I always grew up playing soccer from four years old until now and it really impacted my life in the relationships I've made," the 2017 Forrest graduate recalled. "My parents told me to choose between soccer and basketball if I wanted to play travel soccer and really commit so that's what I did. I just put soccer first and ran with it."

That commitment has led to one of the single best personal seasons in the history of UAH soccer.

"Brynn does a good job of holding herself accountable and because of that she tries to hold her teammates accountable to the standard we want this program to be at," first-year UAH coach James Ballamy said. "Brynn is one of the players on our team that sets those standards for herself and her teammates to reach, which is a good leadership quality to have."

The Chapel Hill native set the tone for the season during the fourth game of the year at Charger Park in Huntsville against Oakwood University, tying a program record with five goals and setting a new program record with 12 points while also chipping in with two assists on the night.

"Her biggest improvement was developing a consistent goal threat, so even in games that may not have been suited to her style of play, she was still finding the opportunities to score goals on a pretty consistent basis," Ballamy continued. "As the season progressed she had to change her game to become more of a team player because teams were marking her tightly as they realized the individual threat she possessed, so she had to figure out ways of making her teammates more dangerous and carry some of the goal scoring burden."

The previous records were set by Ina Wam Bjorkid on October 22, 2006 against Brescia.

The performance earned Colvin the Gulf South Conference Co-Player of the Week award on September 17, the program's first such honor since the 2016 season.

Colvin also tallied two goals against both Mars Hill College and the University of Auburn-Montgomery and two assists against both Sewanee and Oakwood along with an eight-shot, one goal performance against Spring Hill College.

A dedication to the program and a hard offseason workout plan led Colvin to the drastic jump in performance from her sophomore to junior season.

"During offseason in the spring you really get to develop your game and work on things that you don't feel confident in," Colvin, who has started 31 out of 53 games in her UAH career, said. "It's just the season to put it all in so you can get the best out of yourself during the season."

"From the weight room to the sessions on the field, just everything is making you better and you have to have that mindset," Colvin added.

The soccer team as a whole also showed marked improvement from the previous season, winning the most conference games (5-8) since the 2001 season and were one game away from qualifying for the conference tournament.

"We had a different environment this year and the team just had such a good bond that was truly special and different from past years and that really makes you want to give your all for your teammates," Colvin, who has now scored 19 goals and recorded 48 points in her career as a Charger, said. "My favorite moment from this year had to be as an overall team performance just making history and having more conference wins than any other team since 2001."

"You could just tell this team wanted to play for each other and we never quit in any game, we had some close ones, that could've gotten us to the conference tournament," Colvin continued. "Even though the end result didn't show, being there at the game, everyone was in it until the end and it was great playing for a team where we all wanted the same thing and it makes me so excited for my senior season to see where we will go from here."

Despite finishing with a 7-10-1 overall record, the Chargers finished 5-4 at Charger Park and lost five games (Erskine College, Alabama A&M, Delta State, West Georgia and Valdosta State) by a single goal, making UAH a favorite to compete for a conference championship in 2020.

"The outlook for UAH is very bright, the ladies have just come off a season where they recorded the most conference wins in a season since 2001," Ballamy pointed out. "We'll miss the five seniors that leave us, but the returning group of players and the four new signees we have so far will put UAH in a great position to challenge for a spot in the conference tournament for 2020, a huge goal of the ladies and the program."

"Brynn, as a senior in 2020, will hopefully play a big part on and off the field in leading us to that goal," Ballamy added. "We hope to see her numbers increase again as she finishes her college playing career with a bang!"

Colvin also finished among conference leaders in multiple categories with her shots finishing 8th in the GSC, goals finished 9th in GSC, shots on goal finished 11th, and game-winners finished 12th in the Gulf South Conference.

But just as important, Colvin also excels in the classroom, making the GSC All-Academic team all three seasons in Huntsville.

"My major is kinesiology and I'm enjoying learning about it so much because I'm an athlete so I can understand the things I'm learning but also see it and get first-hand experience with my trainers and see what they deal with day to day."

"I'm not sure what I want to do but I'm excited to figure it out in the coming years."

And like so many former athletes that hail from Marshall County, Colvin continues to keep up with her former alma mater and soccer program while also not shying away from being a role model not just for aspiring soccer players, but to all athletes with the goal of one day playing high level athletics.

"I do keep up with Forrest soccer," Colvin explained. "My Dad (Tyler Colvin) is still coaching there with coach (Nicole) Pickle and I love hearing about how the girls are doing and it just makes me happy to see girls enjoying the game, win or lose, they have passion for playing."

"Playing at Forrest was different because as much as I learned from my dad and coach Pickle, I also learned from coaches that we played and players, that we are all there for the same reason and once you realize that, it helps you have that sportsmanship and respect mindset for the people you play against," Colvin added.

"I'm still very competitive, don't get me wrong," Colvin laughed, while also parting with some advice for the younger athletes. "Continue to grow and never think just because you’re from a small school you can't be something more or go somewhere bigger."

"You have the ability to take your life whichever way you choose, so keep working and keep hustling," Colvin finished. "I can't wait to see where life takes all of you."

True words of wisdom from a small town soccer star that is making a name for herself on the big stage.