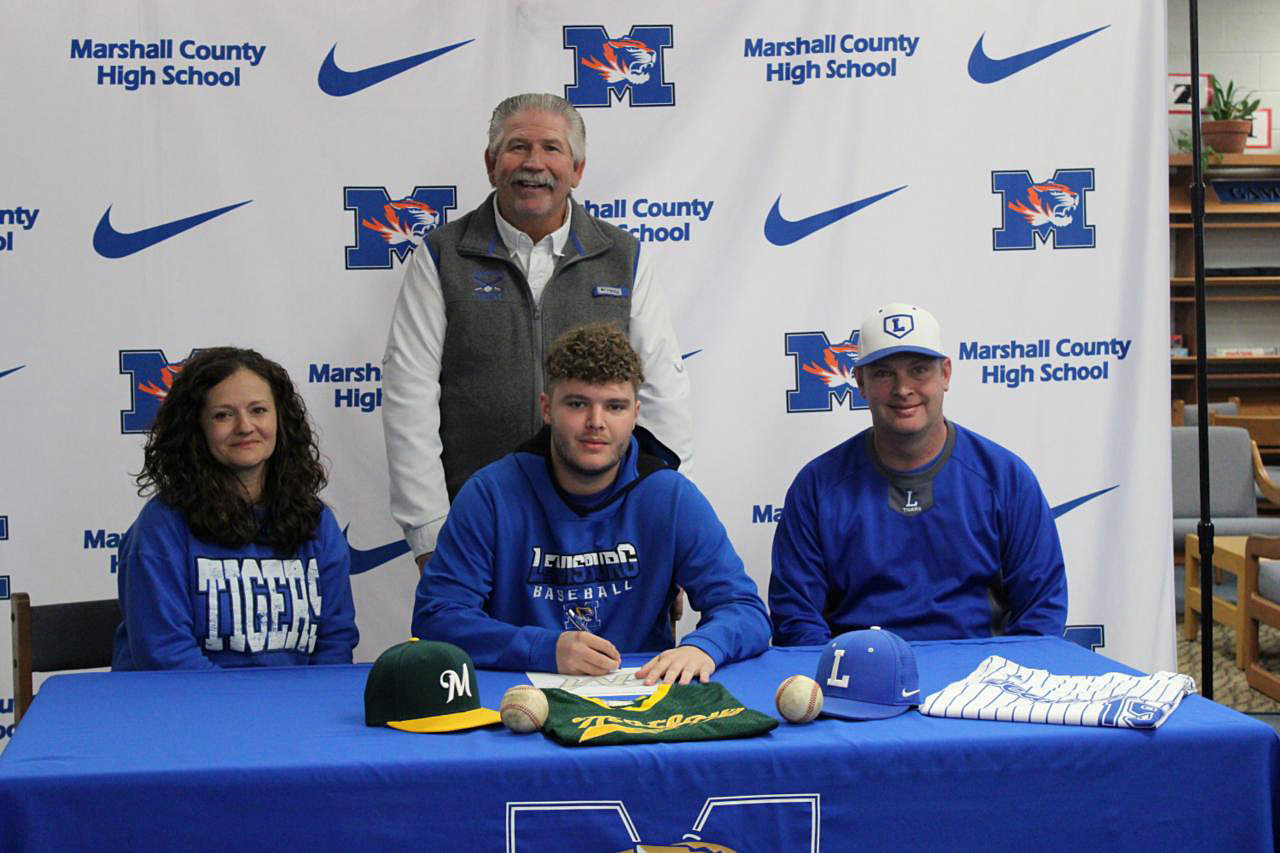 Carson Cheek makes it official to become a Motlow Buck and signs his letter of intent to play college baseball.
Submitted photo
Posted Thursday, January 13, 2022 11:31 am
By Chris Siers ~ sports@t-g.com

Carson Cheek has always wanted to play baseball at the next level.
From his earliest days playing when he was just five-years-old, to now, on the cusp of his senior season playing with the Marshall County Tigers—making it to the next level has always been a dream.
That dream has officially come true.
Cheek made it official and signed his letter of intent to continue his college baseball career at Motlow State Community College.
He’ll join teammate Bryson Hammons and continue on to be a Buck as a legacy, following in the footsteps of his grandfather.
“It’s pretty exciting. As a kid, you always want to make it to the next level. I’ve always to play college baseball. I just don’t want to stop. It’s very exciting for me,” Cheek said.
“It’s pretty exciting. Both of them are really special. His granddad and I grew up together. We were college roommates and played college baseball together at Motlow. This made it real special to have his grandson go to Motlow and not only follow in his granddaddy’s footsteps, but to also be a Buck and a legacy,” Tiger coach Mike “Monk” Reese said.
“I wanted to go to school with him (Hammons). Motlow has always been a place in my heart because my granddad went there and I really wanted to make it there,” Cheek said.
Reese, who is a former Motlow Buck himself, helped make the connections that facilitated Cheek’s eventual signing.
“Coach Monk helped a lot in making that happen with getting in touch with the coaches and getting seen by them,” Cheek said.
For three years, Cheek has been an anchor in the Marshall County starting rotation and has toed the rubber against the opposing team’s top pitcher.
“He’s been a three-year starter for us on the mound, going into four years this year. He’s an all-district pitcher. If he’s on the mound, we have a chance to win the ballgame. He always pitches the tough games. I usually match him up against everybody else’s No. 1. What he does is keep you in the ballgame with an opportunity to be successful,” Reese said.
Cheek aims to fit into the Motlow rotation himself and will play as a pitcher only next season.
“I think he’s going to fit in pretty well. He’s got a big time breaking ball with a fastball that’s not overpowering. He has a great two-seamer fastball that breaks a lot. If you’re sitting back and waiting on his breaking ball, he can get the fast ball by you. He’s perfecting a splitter and has a good change up. He’s got some growing up to do,” Reese said.
“In high school, you usually only have to get three or four guys out. In college, those guys one though nine, they’re capable of hitting the ball out of the ballpark. You have to pitch the No. 9 guy the same way you do the No. 3 or 4 guy.”
For Cheek, he’s excited to continue on for the next two years with Hammons, who has played with Cheek for years.
“It feels really good for both of us to make it together. It’s exciting I get to make the journey I with him,” he said.
While he’s played baseball for over a decade, one memory stands out for Cheek above all the others.
“One of my favorite memories playing came on my first-ever home run because it came on Father’s Day when I was 11 years old. I was in a slump. I heard my dad scream, “all I want is a hit,” and I hit it out,” he said.
While he’s still roughly eight months away from officially attending Motlow, his focus now turns to making his final ride at Marshall County a memorable one.
“I just want to make this last season memorable for everyone,” he said.
Cheek plans on studying business.