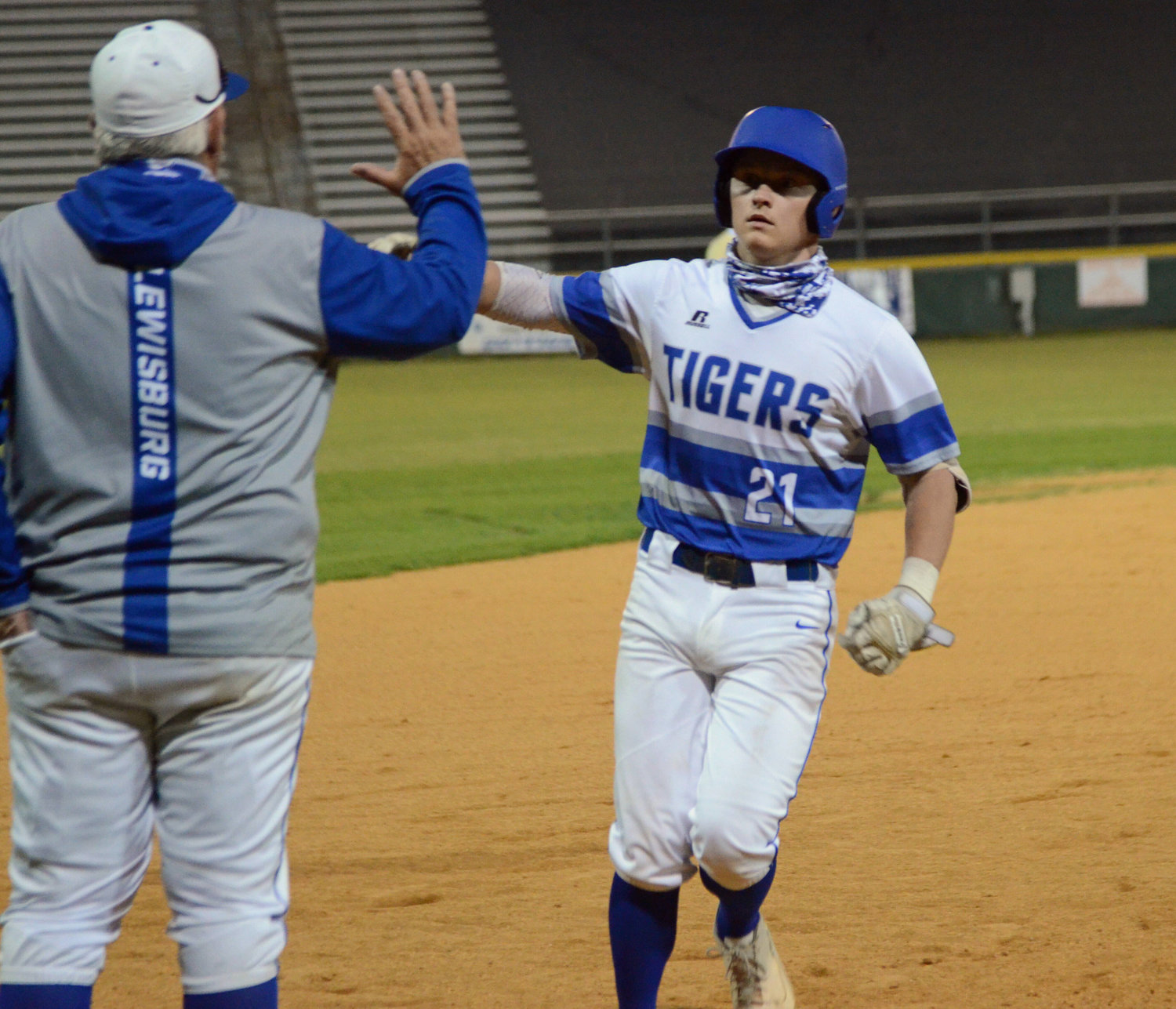 Grayson Miller does the home run trot and gets ready to touch the third base bag where MCHS coach Mike “Monk” Reese is waiting for the high-five for Miller in the bottom of the sixth inning.
Tribune photos by Anthony S. Puca 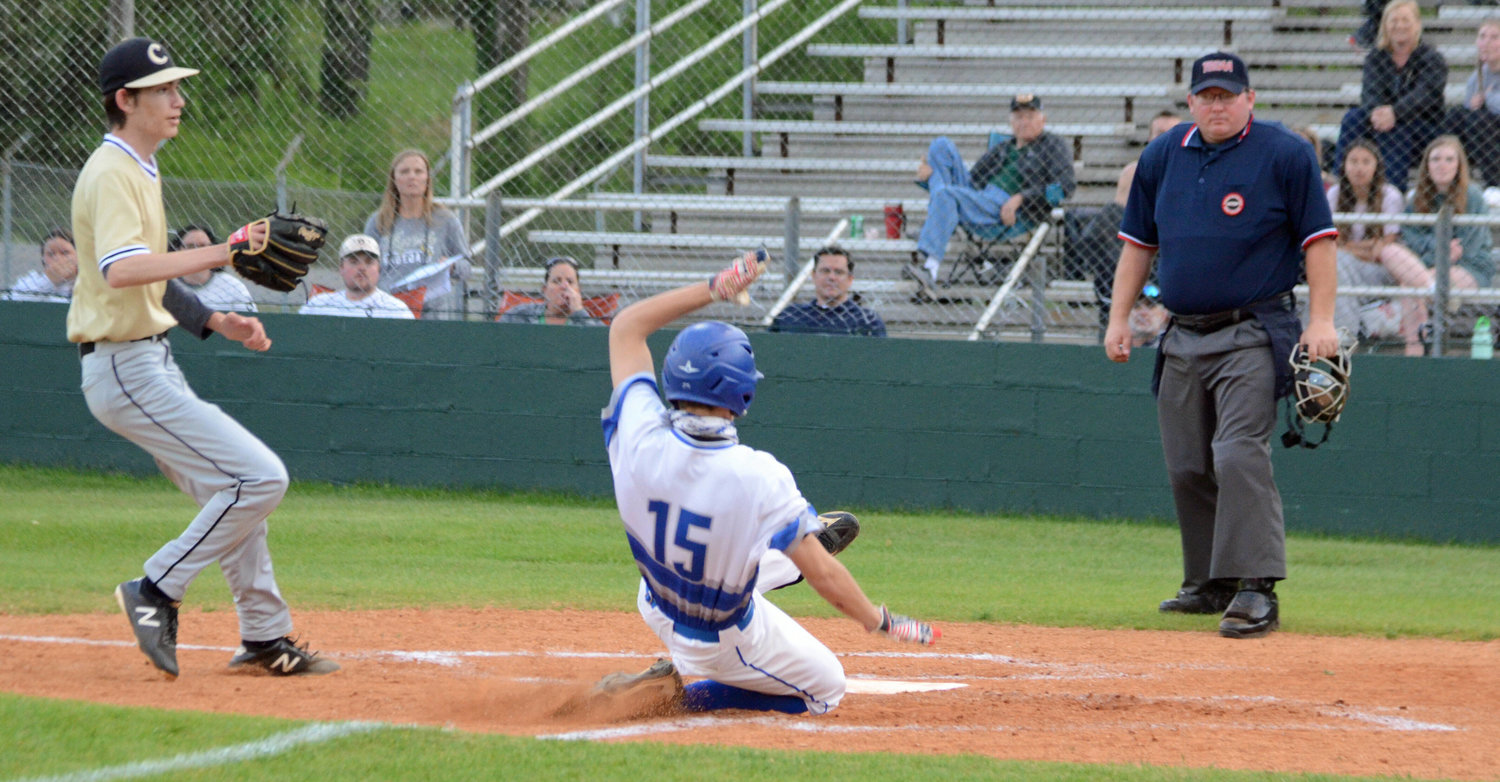 Bryson Whaley (15) slides safely home with the tying run in the bottom of the second inning. 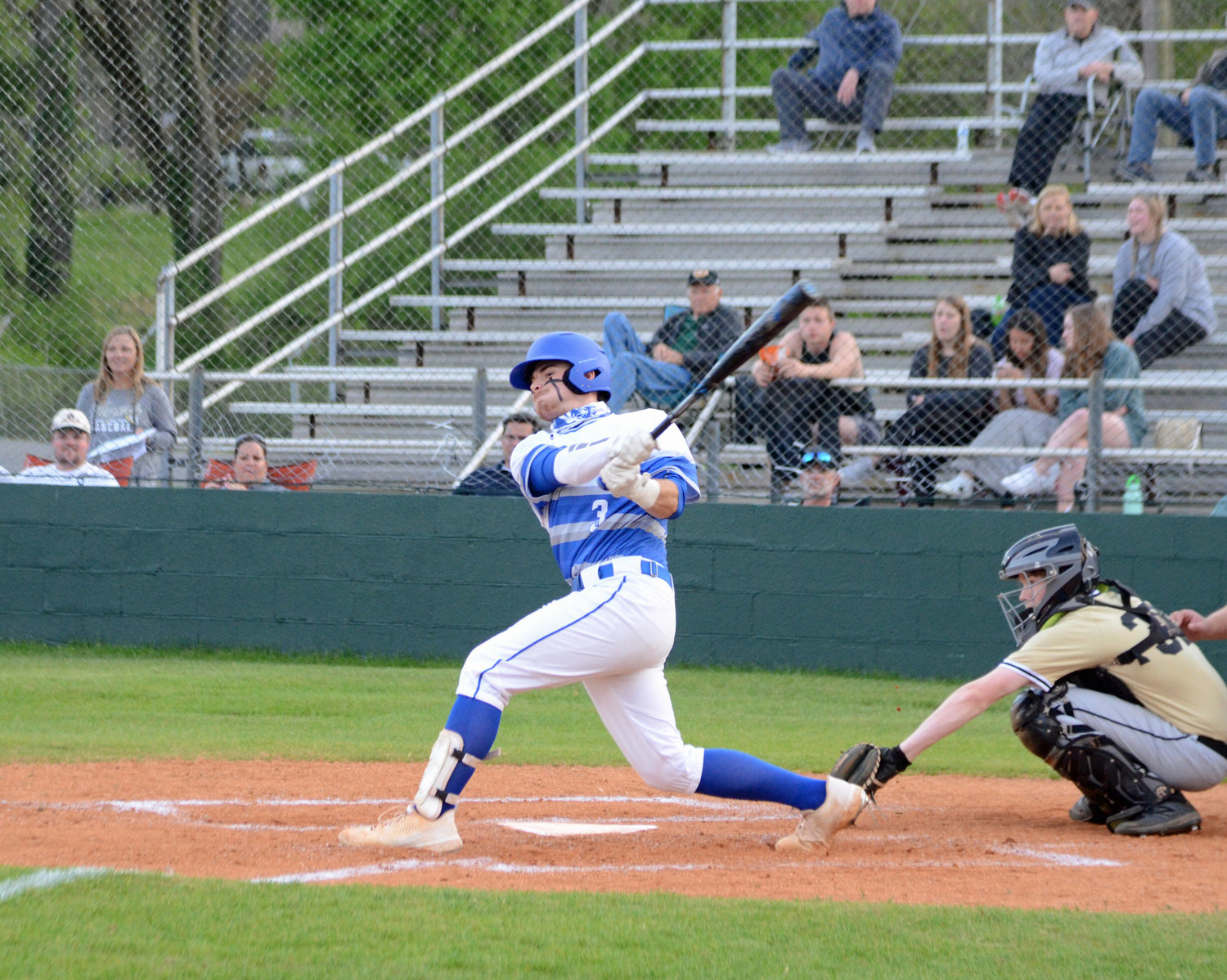 Tristan Griggs slams a base hit to lead off the top of the second inning. 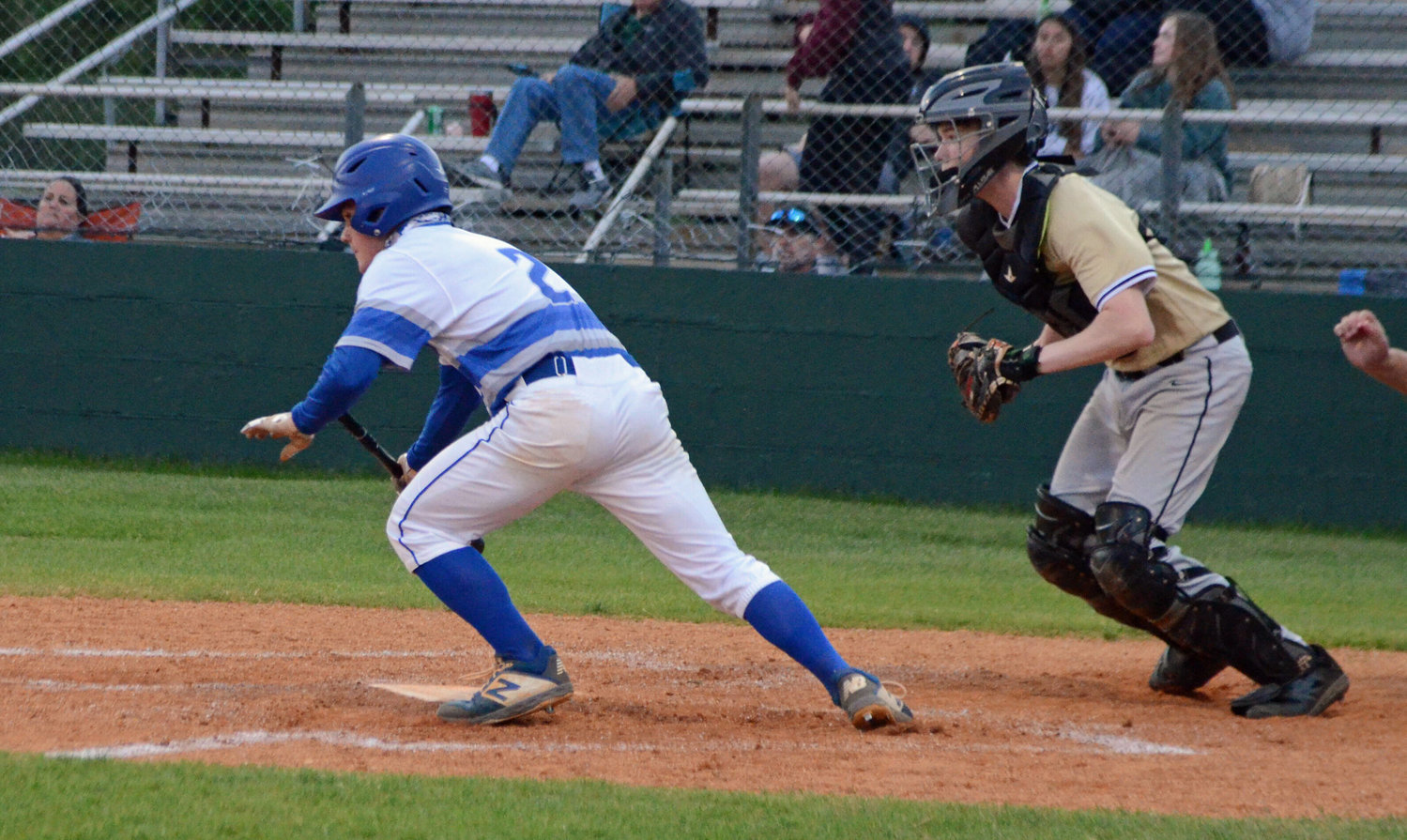 After a 4-0 loss at Murfreesboro Central Magnet School on Monday, the Marshall County Tigers returned home to Joe George Field in Lewisburg on Tuesday night trying to avoid the District 12-AA sweep, but it was not to be as they fell 7-4.

The Tigers (7-6, 1-5) remain in the basement of the district standings while Murfreesboro Central Magnet (8-8, 3-3) moved into third place with the win.

“We battled back and had our opportunities with runners in scoring position two or three times in crucial situations, but just didn’t get that big hit,” MCHS coach Mike “Monk” Reese said. “It just didn’t happen tonight, but we are going to keep battling.”

Marshall County has two league games remaining with both Giles County and Community.

Logan McKnight started on the mound for MCHS and almost escaped a first inning two-out, bases loaded jam, but a two-run single by Braden Hopkins spoiled the attempt.

Matthew Fleischman was the starter for MCM and he retired the side in order in the bottom of the first inning and McKnight did the same in the top of the second.

Tristan Griggs and Bryson Hammons slashed back-to-back singles to start the bottom of the second inning and Bryson Whaley came in to run for Hammons.

Griggs tagged up and went to third on a fly ball to right field before consecutive passed balls sent both MCHS baserunners to the plate, tying the game at 2-2.

Central Magnet responded in the top of the third inning as Adam Apagian and Hopkins reached on back-to-back singles to start the frame and Apagian came home on an RBI sacrifice fly by Hayden Griggs before MCHS got out of further trouble with a pretty around the horn double play.

Esten Cook, who had come in for Fleischman with one down in the third inning, faced four MCHS batters in the bottom of the fourth inning and kept the one-run lead.

McKnight left the hill with two-on and one out in the top of the fifth inning as Hammons came on in relief and he was greeted by an RBI base hit by Mikey Pletan, making it a 4-2 contest.

MCHS left one runner on base in the bottom of the inning and in the top of the sixth, Central Magnet put three more runs on the board via an RBI hit by pitch to Gage Swanson and a two-run single by Pletan to make it a 7-2 contest.

Marshall County got two of the runs back in the bottom of the sixth when JW Beasley tripled with one out and Grayson Miller followed with a long home run over the left field fence, making it 7-4.

Cook retired the next two MCHS batters to end the inning and MCM did not score off Hammons in the top of the seventh inning.

Kirby led off the bottom of the seventh with a base hit, but was forced out at second on a blooper to center field for the first out.

Cook got a strikeout for the second out before issuing back-to-back bases on balls to Hammons and McElhaney, but the game ended on a fly ball to center field.

MCHS travels to Cascade (4-10) on Thursday for a non-league contest before a home and away district series with archrival Giles County (9-7, 4-2) on Monday and Tuesday.

“These guys know what we are trying to do, we just have to keep working towards that,” Reese said. “We still have a lot of season left, we need to get going in our district and get a good seed for the tournament and maybe we can be swinging those bats better by then.”