CORNERSVILLE — The Eagleville Eagles (4-18, 1-4) came calling on Tuesday night hoping to avoid a season sweep by Cornersville (8-10, 2-4), something the Bulldogs have not done in more than 20 … 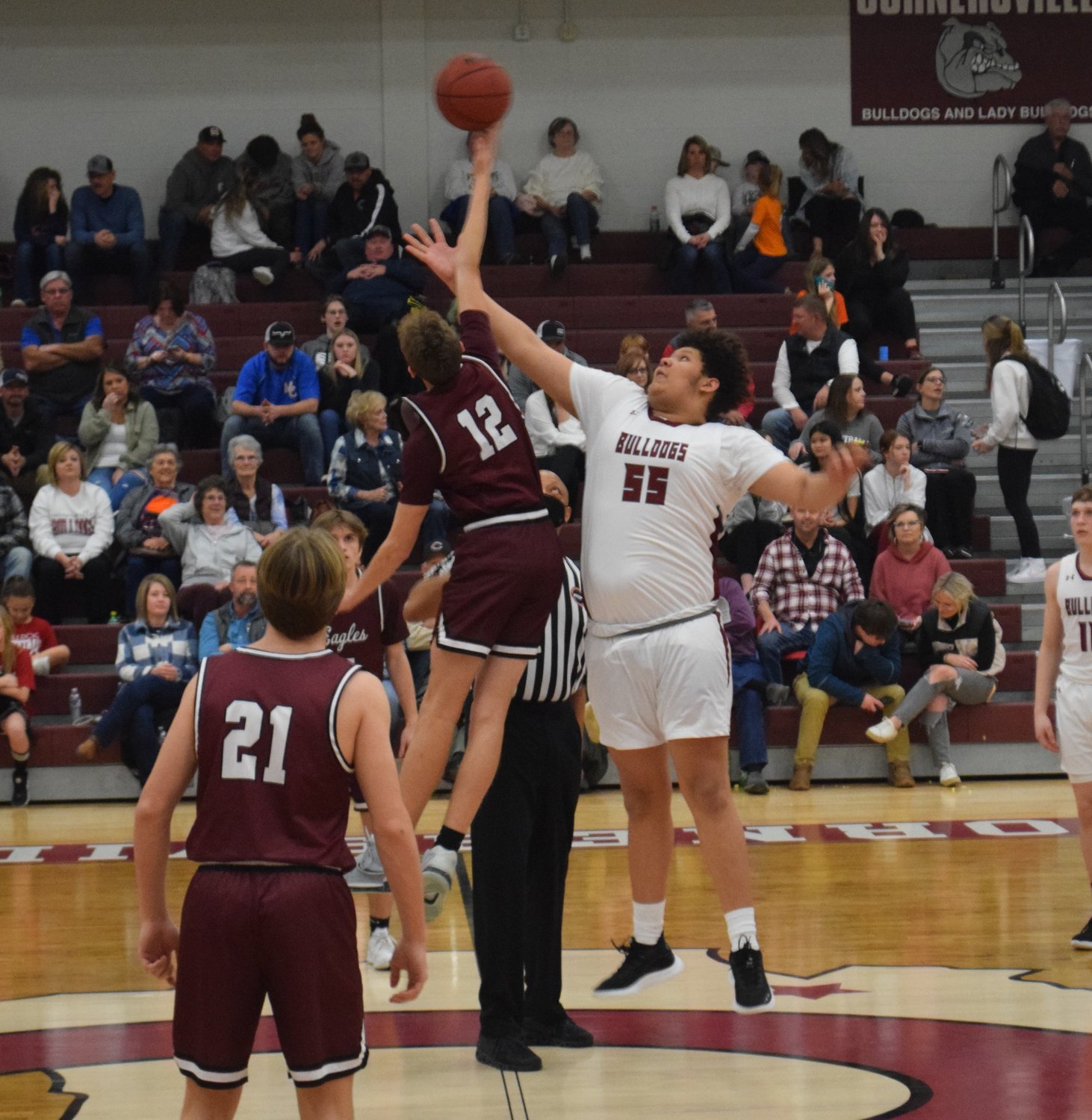 Kel Ford battles Eagleville’s Keydon Bassham for control of the opening tip-off on Tuesday.
Tribune Photo by Dennis Holley
Posted Wednesday, February 2, 2022 1:38 pm
By Dennis Holley ~ Sports Writer
CORNERSVILLE — The Eagleville Eagles (4-18, 1-4) came calling on Tuesday night hoping to avoid a season sweep by Cornersville (8-10, 2-4), something the Bulldogs have not done in more than 20 years.
The Bulldogs built a nine-point lead by halftime and then withstood a valiant second-half effort by the Eagles with clutch baskets and free-throw shooting to complete the season sweep 56-51.
Freshman point guard Gage Lovell poured in 17 points that featured twisting, driving ball handling drives down the lane that brought the Cornersville faithful to their feet.
The game began with both teams playing on even terms as Blaine Woodard and Mason Calahan bombed 3-pointers and Lovell making a basket and four of six free-throws.
The Eagles countered with Rhett Deaton and Keydon Bassham sinking 3-pointers and Jordan Reed, Grey Barker and Noah Lilly sinking baskets.
A last second foul and a made free-throw by C.J. Goers put Eagleville in the lead 13-12 after one quarter of play.
Both teams experienced foul trouble and both teams were shooting one-and-one free throws early in the second quarter.
Eli Welch, having sat out the first quarter, made his presence felt quickly making a layup off a give-and-go and Lovell with a high-lite move down the lane pushed the Bulldog lead to 16-13.
Bryce Woodard canned two free-throws, Mason Calahan with an NBA-range 3-pointer and Lovell again striking for a basket pushed the Bulldogs’ lead to 23-15.
Lovell had six points in the quarter and Andrew Santini brought the crowd to their feet with a last second three-pointer that put the Bulldogs up by nine points at the end of the first half, 28-19.
The third quarter saw the Eagles fight back as they connected on four 3-pointers, with Barker sinking two, and Goers and Deaton adding one apiece.
Lovell and Kale Adcox sank 3-pointers for the Bulldogs and Kel Ford, working down low, dropped in four points.
But the Eagles cut the Bulldog lead to five points by the end of the quarter, 40-35.
The Eagles sensing their opportunity was near on a basket by Bassham pulled to within three points just 30 seconds into the final quarter.
Then with 5:49 left in the game Bassham brought the Eagles to within one point, 40-39.
Santin was fouled on a three-point try and made two of three free-throws to push the Bulldog lead to four points, 42-39.
Bassham answered with another basket and a free throw to tie the game at 42 with 5:35 left in the game.
Eagleville then committed it’s seventh foul of the half, sending Bryce Woodard to the line for one-and-one free throws and Woodard promptly made both to put the Bulldogs back in front 44-42.
Bassham tied the score up with a quick move inside before Welch countered for the Bulldogs with a soft bank shot, 46-44.
Goers from outside the arc in front, sank a 3-pointer and Eagleville had the lead 47-46.
Welch for Cornersville again brought the crowd to its feet with back-to-back baskets to put Cornersville back in the lead, 50-47 with 1:45 left in the game.
Welch then sank a short jumper to extend the lead to five points with one minute left in the game, 52-47.
Bassham laid in a basket to make the score 52-49 with 47.5 seconds left.
Lovell answered and sank two free-throws, Woodard sank two of four free-throws between Bassham’ basket for Eagleville for the final margin of 56-51.
The Bulldogs travel to Ardmore, Alabama on Friday, then entertain Moore County on Tuesday night before winding up the regular season at Culleoka on February 10.
Eagleville      13  6 16 16 — 51
Cornersville  12 16 12 16 — 56
Eagleville (51) Keydon Bassham 18, C J Goers 11, Grey Barker 10, Rhett Deaton 6, Brady Burns 4, Jordan Reed 2, Noah Lilly 2.
3-Point Goals (5): Barker 2, Goers 2, Deaton.
Free Throws (6-9): Goers 3-for-4, Bassham 1-for-3, Vari Robinson 2-for-2.
Cornersville (56): Gage Lovell 17, Eli Welch 12, Mason Calahan 6, Bryce Woodard 6, Andrew Santini 5, Kel Ford 4, Blaine Woodard 3, Kale Adcox 3.
3-Point Goals (6): Calahan 2, Blaine Woodard, Lovell, Santini, Adcox.
Free Throws (10-22): Lovell 6-for-8, BryceWoodard 6-for-8. Welch 0-for-4, Santini 2-for-2.
Halftime Score: Cornersville 28, Eagleville 19.