When the 2020 regular season began in the midst of the Covid-19 pandemic in August with mask and temperature checks being mandatory there was much uncertainty of how many games would be played.

To the surprise of many, the regular season slate ended on an October Blue Moon Friday night as the Division II Zion Christian Academy Eagles came calling to Frog Bottom to face the Cornersville Bulldogs. 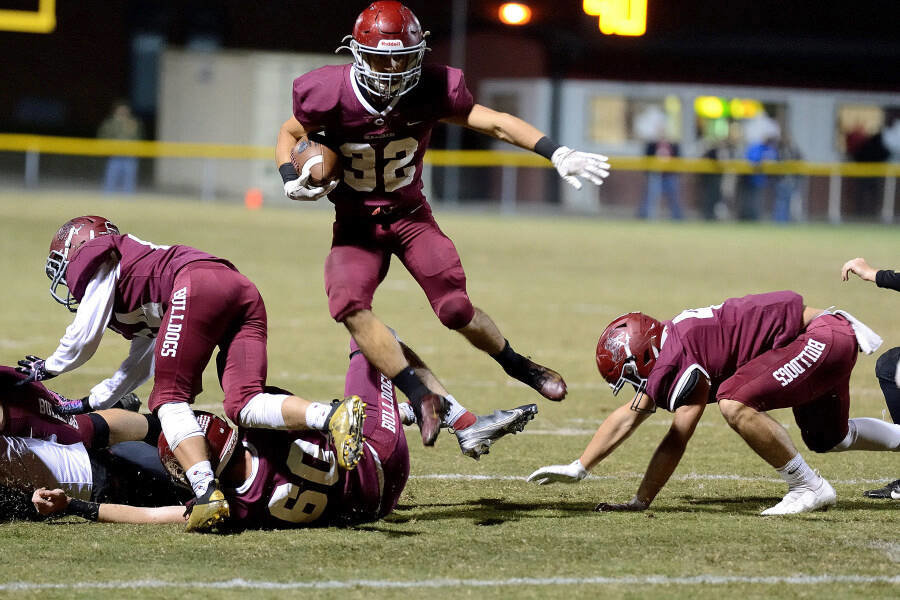 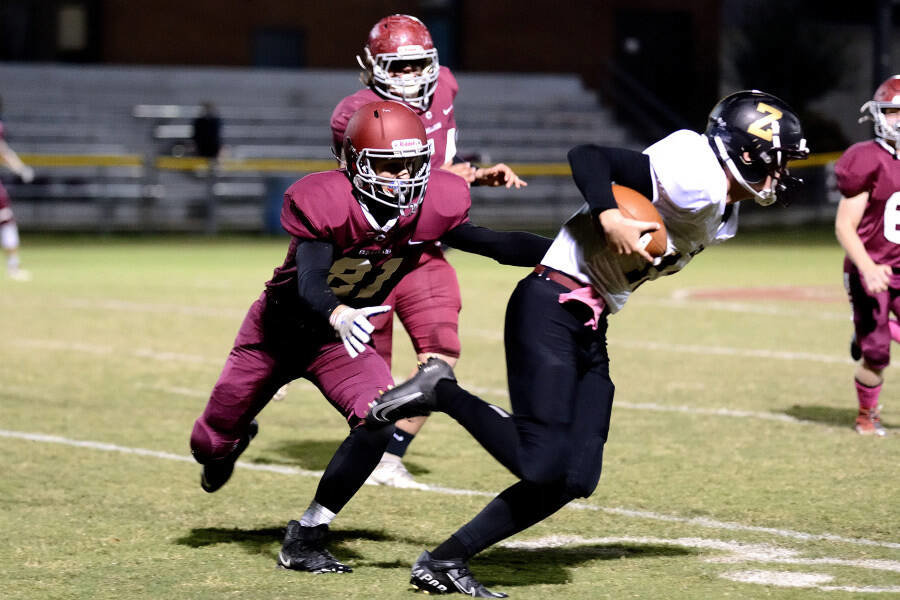 Cornersville’s Beau Schillig (81) dives for the legs and a tackle on a Zion Christian Academy runner. 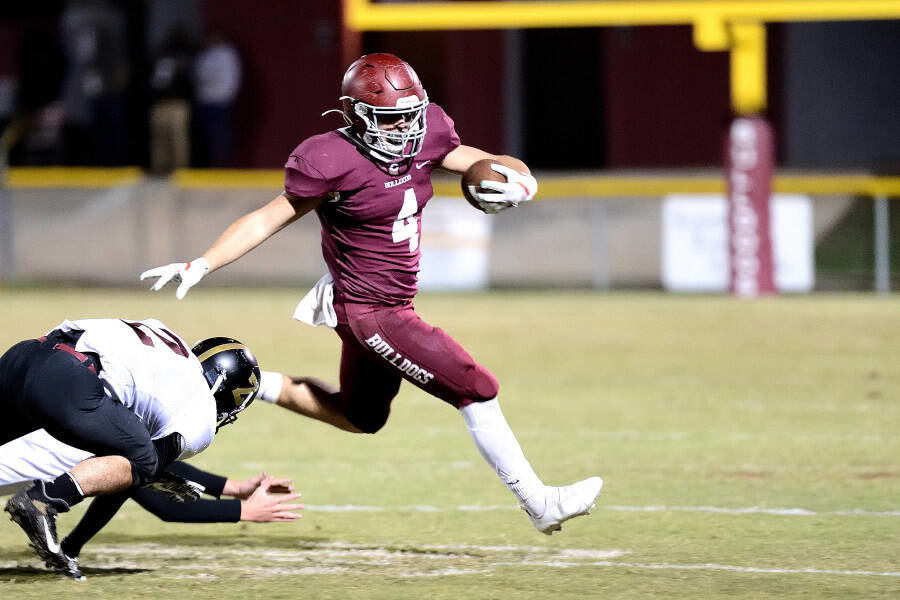 Cason Warner scoots past an Eagles’ defender on his way to a nice gain. 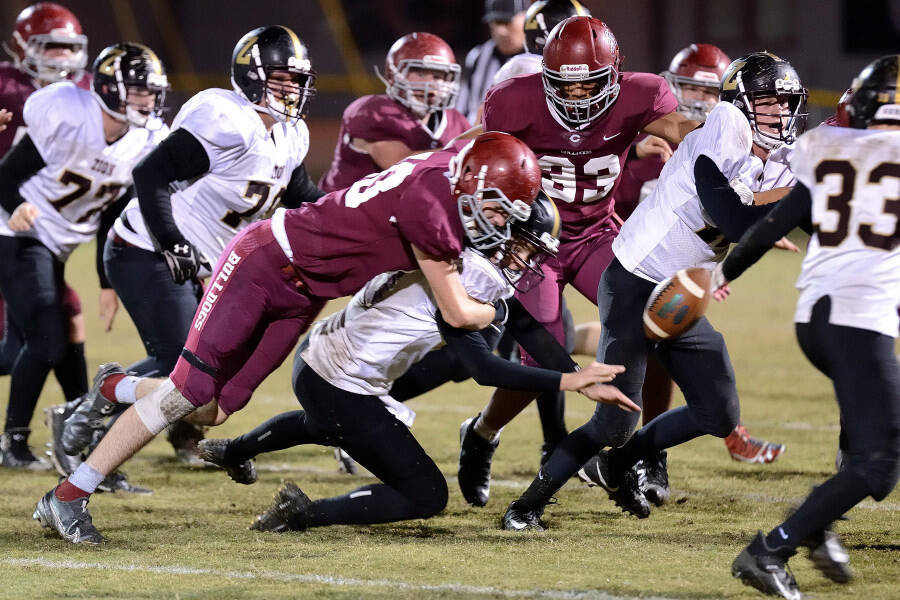 Eli Welch (60) drills an Eagles’ runner to force a fumble for the Cornersville defense that held Zion Christian Academy scoreless in the second half. 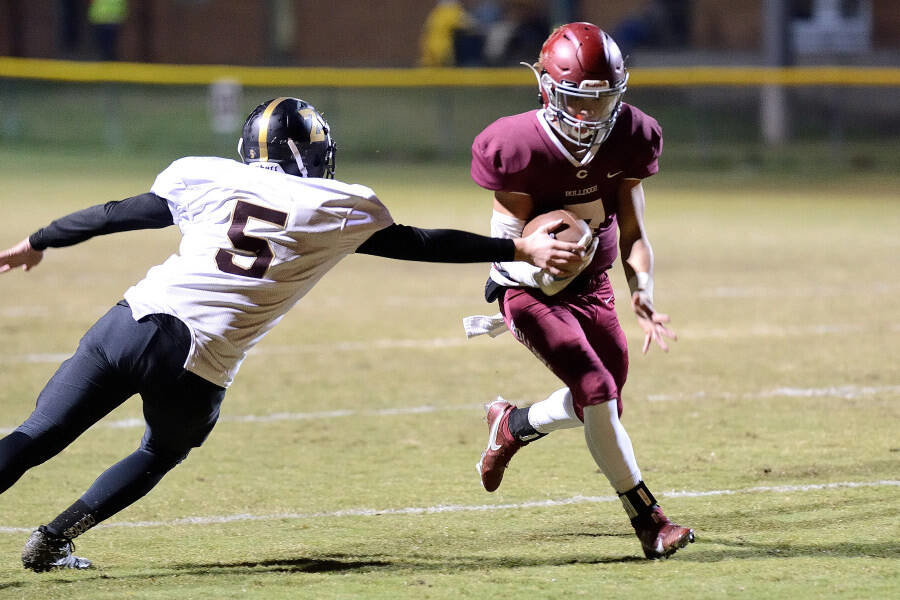 When the 2020 regular season began in the midst of the Covid-19 pandemic in August with mask and temperature checks being mandatory there was much uncertainty of how many games would be played.

To the surprise of many, the regular season slate ended on an October Blue Moon Friday night as the Division II Zion Christian Academy Eagles came calling to Frog Bottom to face the Cornersville Bulldogs.

The Bulldogs trailed by 13 points at the end of the first half, but came out with a different defensive scheme and a fired up offense in the third quarter to storm back and take a 32-27 victory.

“Zion Christian came out and played well, they did some things we knew they could do, we didn’t want them to do them, but we went into halftime and made some adjustments and the guys came out and played great defense and we were able to put the ball into the end zone,” Cornersville coach Gerard Randolph said. “We need to do a better job in the first half controlling the game. The seniors, Jackson (Farler) and Brady (Calahan) stepped up, we need our seniors to do that.”

Asked how he steps up every game for the Bulldogs, Calahan said, “I think it’s all the players and coaches who push me to do better.”

“Coach Randolph gets on us sometimes, but I know he sees the higher potential in our athletic ability as an individual and as a team. He pushes us to maximum potential.”

The Eagles took the opening kickoff and went on a six-play drive that was highlighted by the running of quarterback Luke Perko and running back Josh Harrison as they moved the ball to the Bulldogs’ 36-yard line where Perko’s pass found Sam Sullivan open for a touchdown.

The Bulldogs received the ensuing kickoff and began a nine-play drive featuring Cason Warner slashing and bulling over defenders as they moved the ball to the 25-yard line where on a second down play, Calahan got loose and sprinted to the end zone for a touchdown.

The PAT was blocked and with 5:01 left in the first quarter the score was ZCA 7, Cornersville 6.

The Eagles started another offensive series with Perko leading the nine-play drive that was capped off with a 23-yard pass to Max Brown for a touchdown and Ratliff added the PAT to push the lead to 14-6 late in the first quarter.

The second quarter saw both defenses stiffen and preventing each other from gaining momentum.

With seven minutes left in the first half, ZCA gambled on a fourth-and-three from their own 25-yard line, but Perko’s pass fell incomplete and the Dawgs took over.

Three plays later, Cason Warner bulled over for the touchdown and Calahan rambled around the right side for the two-point conversion to tie the game at 14.

ZCA struck back quickly as Perko found Davis Duffy for a 67-yard touchdown pass, but the two-point conversion try was no good and the Eagles led 20-13.

The Eagle’s defense held the Bulldogs and ZCA began another drive and again Perko found Duffy for a three-yard touchdown.

Ratliff’s PAT was good, pushing the lead to 27-14 with 12 seconds left until halftime.

The second half began on a good note as Calahan took a kickoff and slashed for a 56-yard return to the ZCA 29-yard line.

The Bulldogs seemed to be in business, but on fourth down they came up short and ZCA took over.

The Bulldog defense adjusted with a four-man front that paid dividends at once as the Eagles were forced to punt after a three-and-out with the Dawgs gaining possession at the 50-yard line.

“In the first half on defense we had what we call the ‘Dog’ package with three down linemen, but we couldn’t get any pressure on the quarterback,” Farler said. “We went back to our regular four down linemen and our defense stepped up and our offensive line did too.”

The Bulldogs went to the ground game with Calahan and Warner rushing the ball and moved to the Eagles 10-yard line where on second-and-nine, Farler raced around the right side and into the end zone.

Calahan again converted the two-point conversion and with 2:57 left in the third quarter, the ZCA lead had been slashed to five points at 27-22.

The Bulldog forced another three-and-out and the Eagles punted this time to the Cornersville 46-yard line and the third quarter ended with the Bulldogs in possession of the football at the ZCA 33-yard line.

In perhaps the play of the game, who else but that man, Rhett Woodard, on fourth-and-four from the ZCA 41-yard line hauled in a Farler pass, laying out for a spectacular first-down catch just like the guys who play on Sundays do.

Mixing passing and running plays, Cornersville moved toward the goal line where on second-and-nine Calahan ripped off a run, dragging ZCA players to the end zone for the touchdown.

Calahan converted the two-point conversion and for the first time, the Bulldogs had the lead at 30-27 with 8:29 remaining in the game.

On ZCA’s next possession, Riley Qualls fell on an Eagles’ fumble to stop the drive.

“It was a big play, last game of the season, you’re fired up,” Qualls said

After Zion stopped a Bulldogs’ drive at their own three-yard line, Perko was tackled in the end zone by Woodard and Cornersville increased their lead to 32-27.

The fine defensive work of Woodard, shining brightly along with that of Qualls, Blake Estes, Trenton Posey, Calahan, and the rest of the unit has the Bulldogs primed for playoffs.

The Bulldogs ran out the clock and preserved the 32-27 victory to finish the 2020 regular season with a 7-3 record.

Warner said about getting ready for the trip to Huntingdon for the second year in a row, “We are going to rest this weekend and come in full swing Monday.”

“We’re going to make the trip over there, a business trip, with the intention of winning a football game,” Randolph said.

Calahan added, “We went in at halftime and knew we had made some mistakes, so we came out with a four-man front and came together as a team.”

“I am thankful to be part of this community and to be able to be a part of this team with all the brothers I got. We respect Huntingdon and Coach Swanson, but we’re going in to play Bulldog football.”