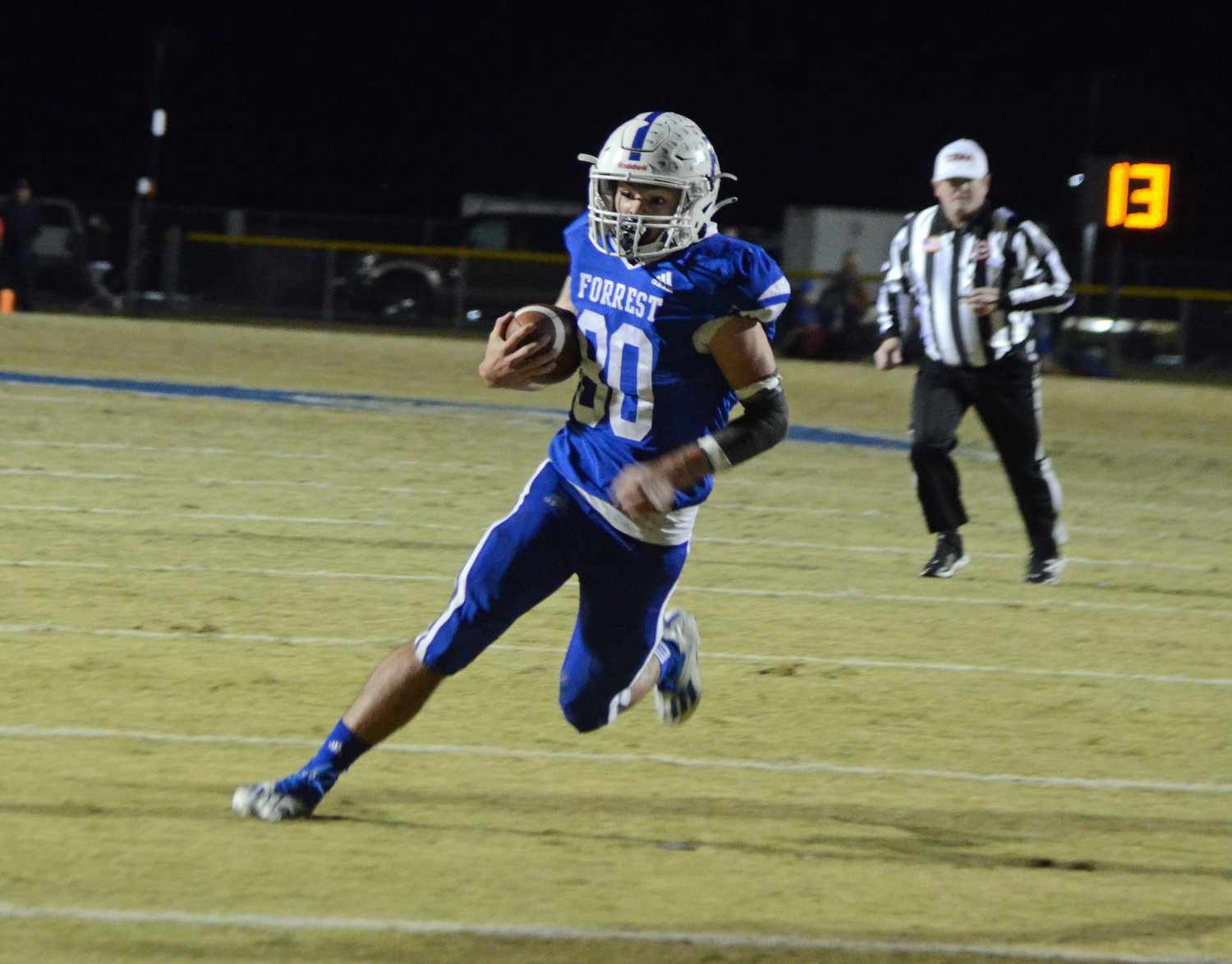 Forrest senior McCalister Wilson scores the first of his two touchdowns in the Rockets’ big 38-7 win over Adamsville in Friday night’s opening round of the Class 2A playoffs at Chapel Hill.
Tribune photos by Anthony S. Puca

The Forrest defense swarmed to the football the entire night, limiting Adamsville to just 33 yards on the ground. 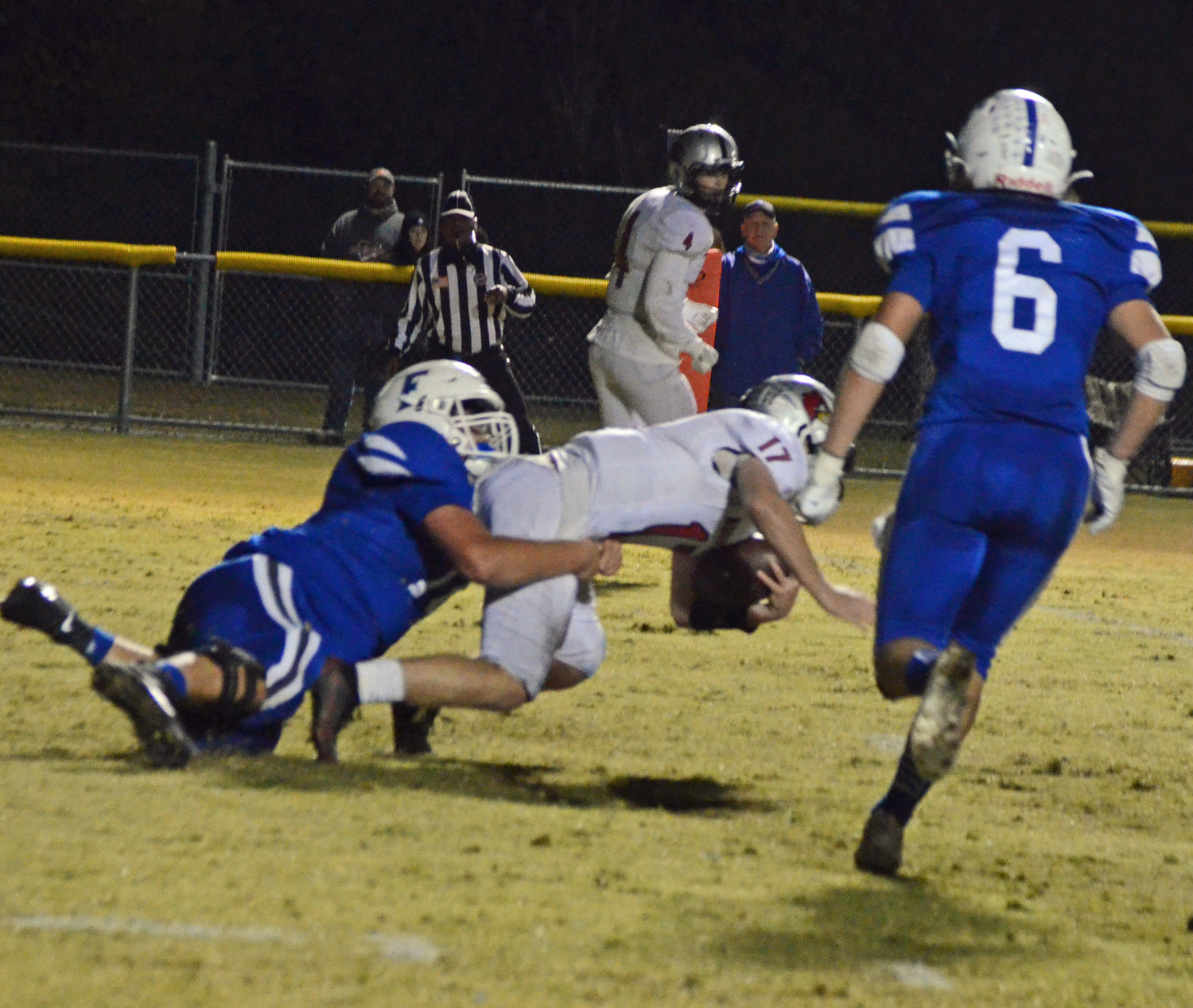 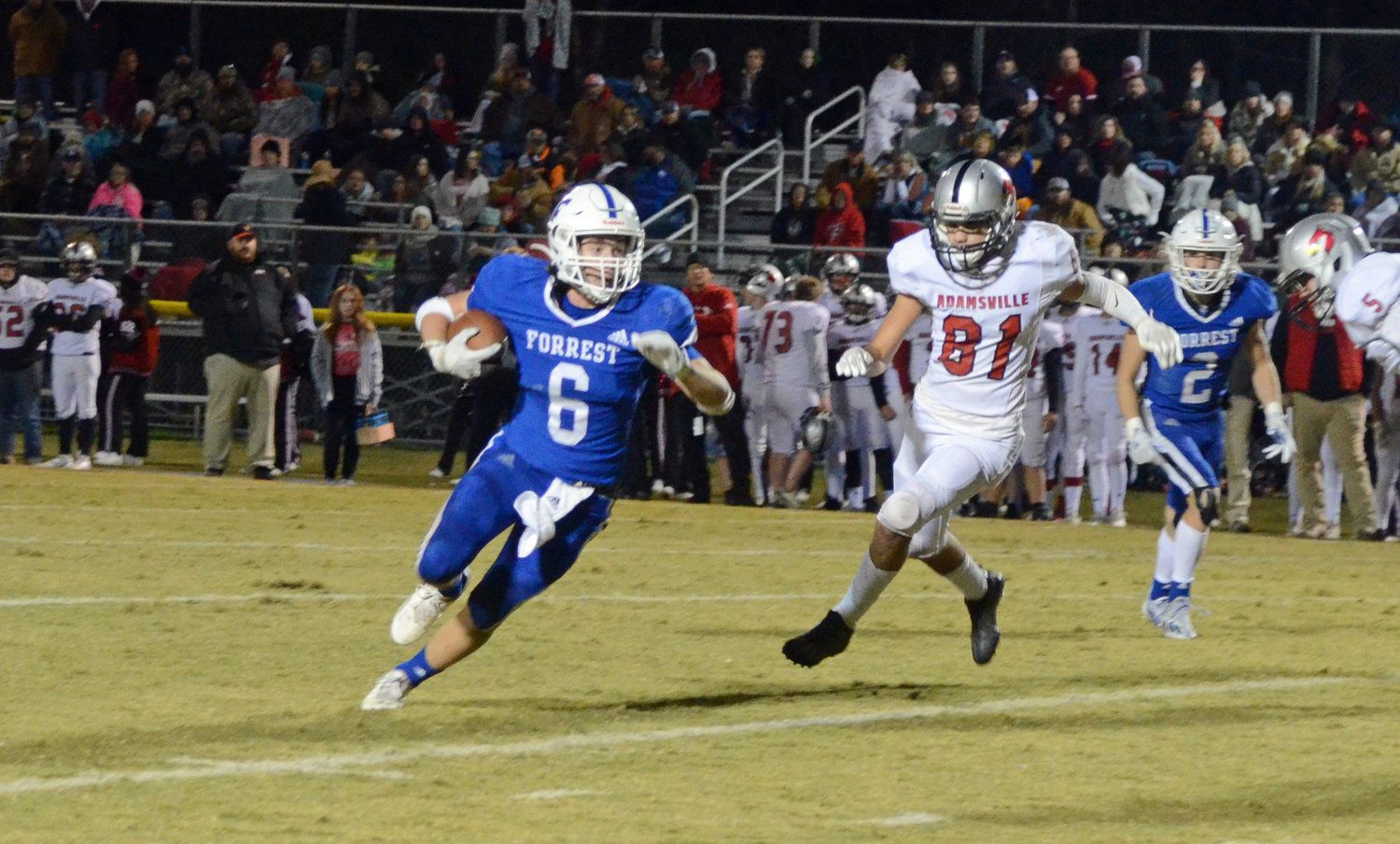 The Region 5/2A champion Forrest Rockets made their 13th consecutive playoff appearance Friday night, hosting the fourth-place Adamsville Cardinals from Region 6/2A at the Murrey E. Holton Memorial Field in Chapel Hill.

The Rockets turned in a dominating performance on both sides of the ball in a lopsided 38-7 win, toting the rock 44 times for 398 yards and five touchdowns while holding the Cardinals to a measly 33 yards on 26 carries.

“We had a great week of practice and our kids came out and executed the game plan,” Forrest coach Eli Stephenson said. “It was a great victory for our team.”

Adamsville’s only touchdown came with just 17 seconds remaining in the second quarter on a Carson Plunk 7-yard pass to Luke Helton.

“Our defense has played outstanding all year and did a great job again tonight,” Stephenson said.

Forrest let all the horses out of the stable with Brenton Burchell leading the way with 78 yards on just four carries and a 23-yard touchdown run.

Chris Davis had 71 yards on five carries, Liam Bell totted the rock 10 times for 64 yards and a 23-yard touchdown run, and McCalister Wilson had 58 yards on four carries with touchdown runs of 10 and 30 yards.

Tayton Swift rushed seven times for 54 yards, Hunter Bennett had five touches for 36 yards and a 4-yard touchdown run while Landon Groeneveld had three carries for 23 yards, Noah Helmick rushed the ball six times for 12 yards, Bryce Tankersley had one run for five yards, and Carson Yates added one yard on two carries.

“Our line up front has been doing a great job,” Stephenson said. “They are the tip of the spear and they got after tonight and our backs hit the holes hard.”

The Forrest defense was superb, forcing the Cardinals to punt after three plays the first three times they had the ball and the fourth time, the Rockets stopped them on a fourth-down play.

After Adamsville’s late second quarter score that made it 17-7 at the half, the Rockets’ defense went in to total shutdown mode as they forced three straight three and outs to start the second half.

The offense paid them back handsomely, scoring all three times after the defensive stands and led 31-7 at the end of the third quarter.

Gavin Grissom opened the scoring for the Rockets as he booted a 32-yard field goal on Forrest’s second offensive possession of the game.

The Rockets also scored on their next two possessions with Wilson scoring on a first-and-goal play from the 10-yard line and Bennett made it a 17-0 contest when he scored from the 4-yard line with 5:36 remaining in the first half.

The only time the Forrest defense let its guard down in the game turned in to the Plunk touchdown pass with 17 seconds left in the first half and from there, the Cardinals did nothing the rest of the game on offense.

Forrest stopped Adamsville on three plays to start the second half before Wilson electrified the crowd with a 30-yard backbreaking run as the senior dragged half the Cardinals defenders in to the end zone.

“Wilson got some great blocks up front, broke it and ran through about three arm tackles and finished it,” Stephenson said. “That’s what we have been preaching all year is to finish and he finished it.”

The Rockets’ defense was fired up after the Wilson score and forced an Adamsville punt out of its end zone that was caught on a fair catch by Burchell at the Cardinals’ 23-yard line.

On the next snap, Burchell broke free and raced down the home sidelines for a touchdown, essentially putting the game away at 31-7 with 5:10 remaining in the third period.

After another Adamsville punt, Bell busted a 21-yard run right up the gut for a touchdown on the first play of the fourth quarter and from there, the Forrest underclassmen received some valuable field time for the Rockets.

“We won in all three phases of the game tonight,” Stephenson said. “Our kids practiced hard all week and they deserved this.”

The Rockets (8-3) take on a familiar foe in second-round action Friday night as they host the Lewis County Panthers, who beat Cascade 36-18 at Hohenwald in round one.

“It’s great to play in front of our home crowd, they bring a great atmosphere and make it tough for our opponents coming in,” Stephenson said. “Lewis County is a solid team and we will get ready this week with a great week of practice and we will be ready next Friday night.”

Lewis County (8-3) has won three out of four versus the Rockets since 2017, winning 7-0 last season at Hohenwald in the final game as four-year region foes.