Americans and Canadians are in similarly overheated housing markets—can either avoid a painful crash? Calgary.com compiled sales data to understand how North America's slowing housing market is playing out. 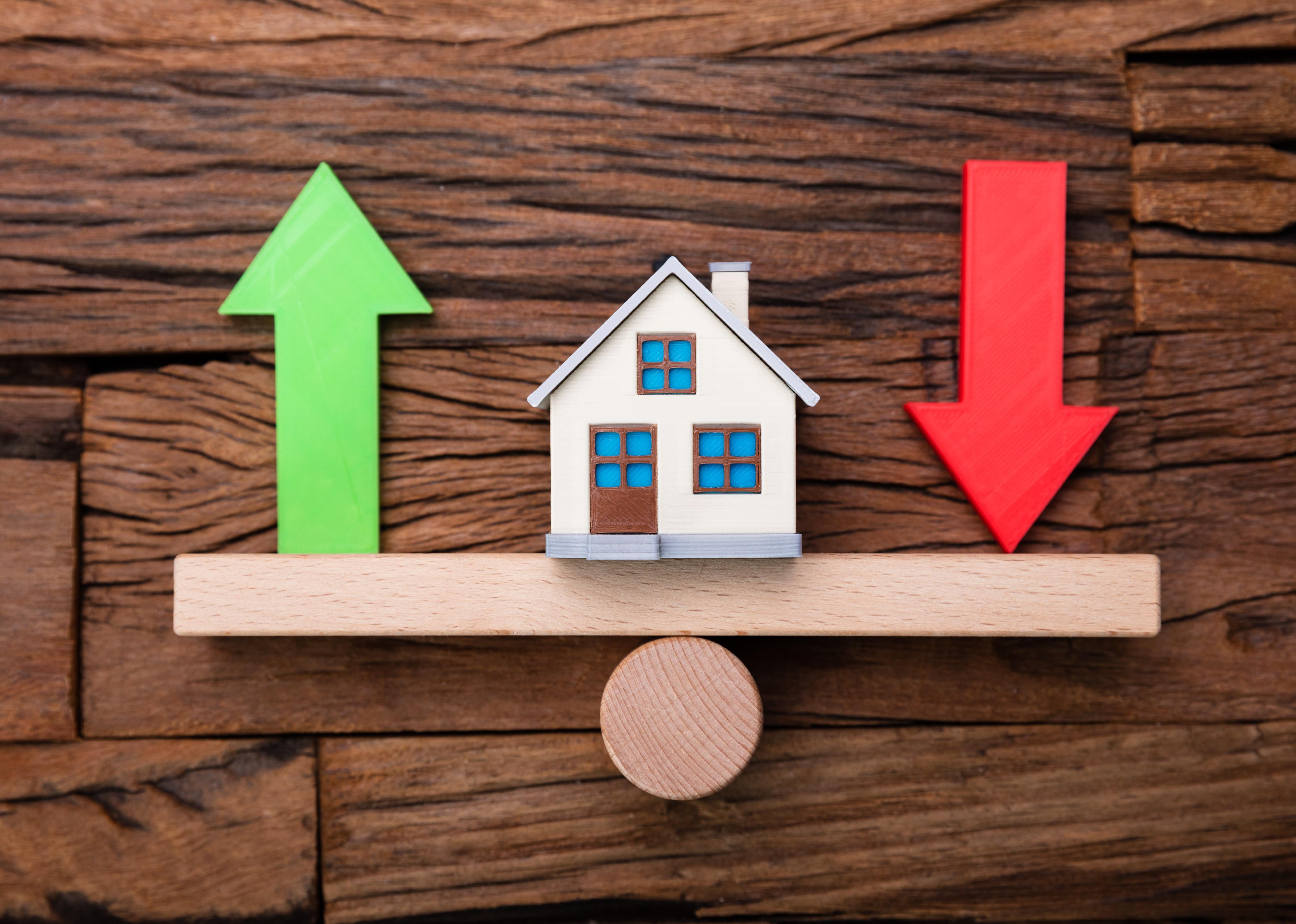 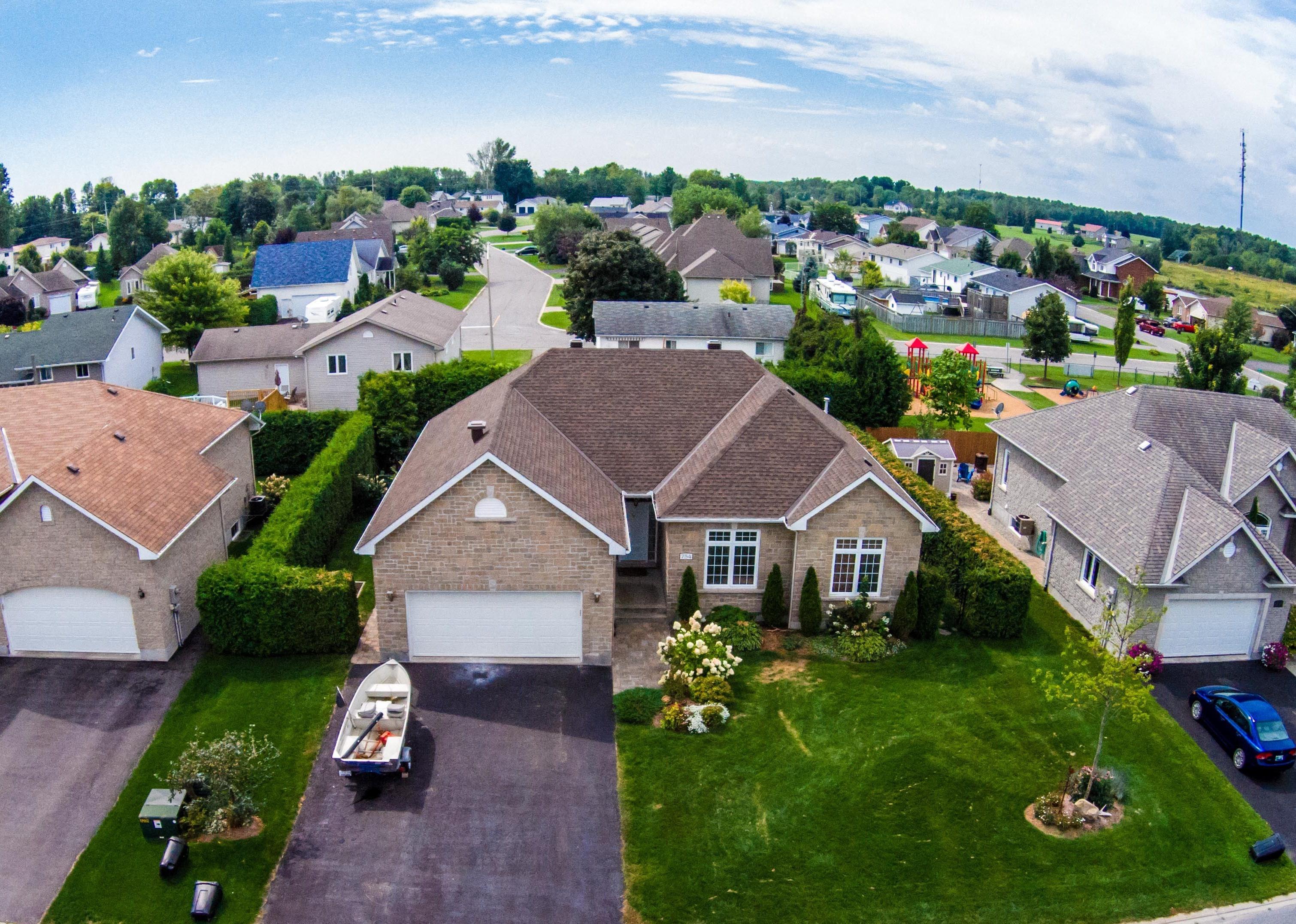 North American markets have been rocked by several economic swings in recent years, not least of which include fluctuating housing market. In the wake of record-breaking home sale prices, an emerging housing correction now threatens to knock tens of thousands from home values across the U.S. and Canada.

Calgary.com compiled data on average home sale prices from the Canadian Real Estate Association and Redfin to understand how the slowing housing market is playing out across North America, examining housing data for the five biggest metros in the U.S. and Canada. Values for Canadian home prices are in Canadian dollars; U.S. home prices are in U.S. dollars.

At the start of this year, the U.S. and Canada's economies came into 2022 hot.

Fueled by years of historically low interest rates for borrowers and the impacts of the pandemic, both countries saw home sales—and prices—skyrocket. In the U.S., home prices in September 2022 were 43% higher on average than in early 2020, while housing inventory was 43% lower than in 2019.

As inflation took hold, interest rates rose quickly in Canada and the United States. In turn, houses stayed on the market longer. Now, wresting control of inflating prices will be paramount to economic stability. Both economies hope to achieve this under the direction of their central banks, which set policies that can make it more expensive to borrow money and therefore provide a braking lever to slow down buying and selling activity in the housing market.

But as each country tries to wind down its current housing cycle, the results look different in the most populous housing markets.

Overview of the housing market in Canada 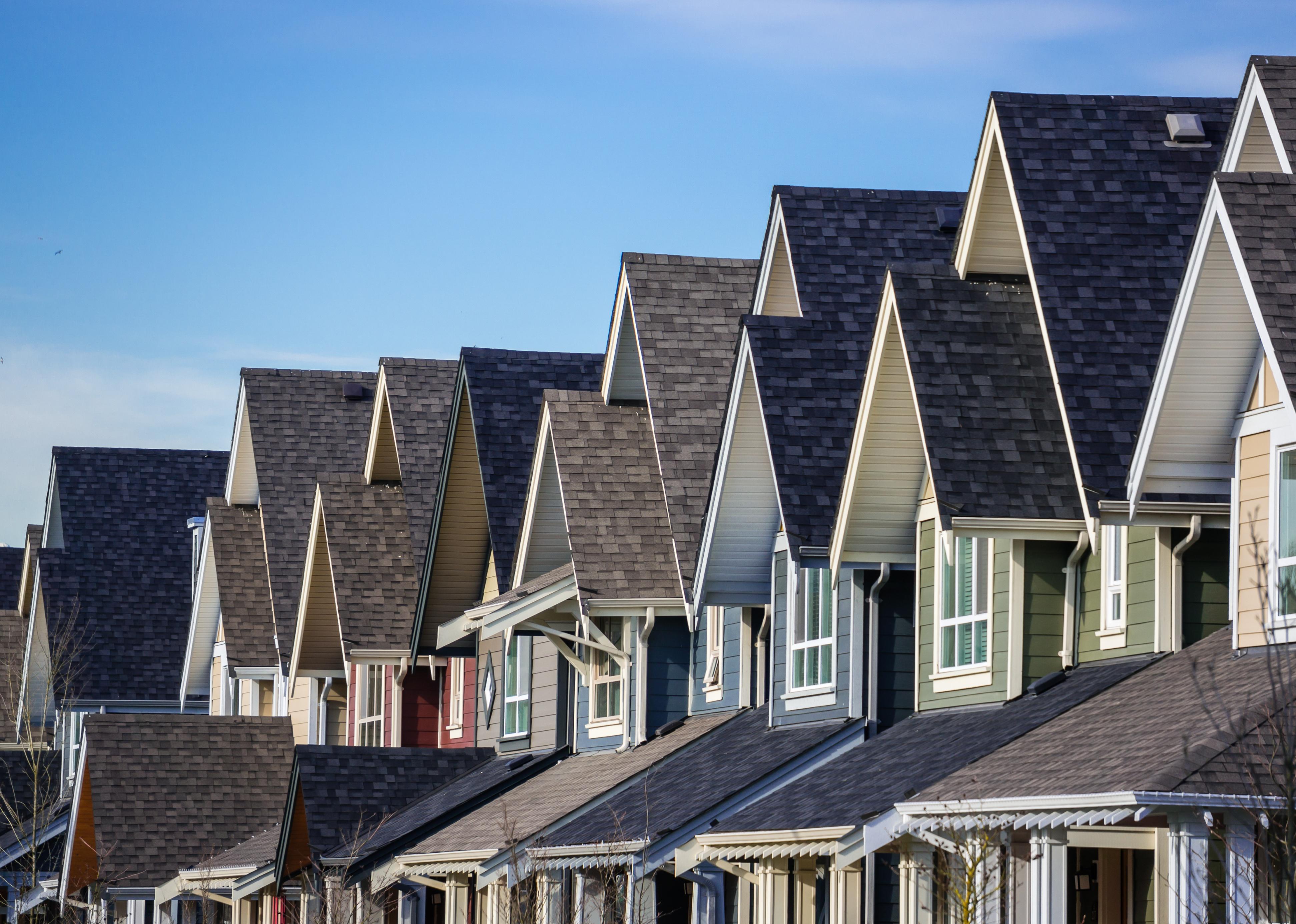 Canadians flocked to more spacious dwellings in 2020 and 2021. Interest rates were historically low and COVID-19 was overwhelming hospitals during this period. But as inflation began rising quickly at the start of this year, the Bank of Canada, which sets Canadian monetary policy, raised its benchmark interest rates six times since March.

With more interest attached to already high home prices, sellers were forced to lower asking prices to appeal to would-be buyers who found they could afford a lot less.

There is also evidence emerging that overheated property values may be encouraging players in the market to bend the rules to keep otherwise unqualified buyers in the market. A recent CBC investigation asked 10 Canadian real estate agents for help qualifying for a mortgage and six of the 10 offered a fraudulent method of proving income.

Overview of the housing market in the United States 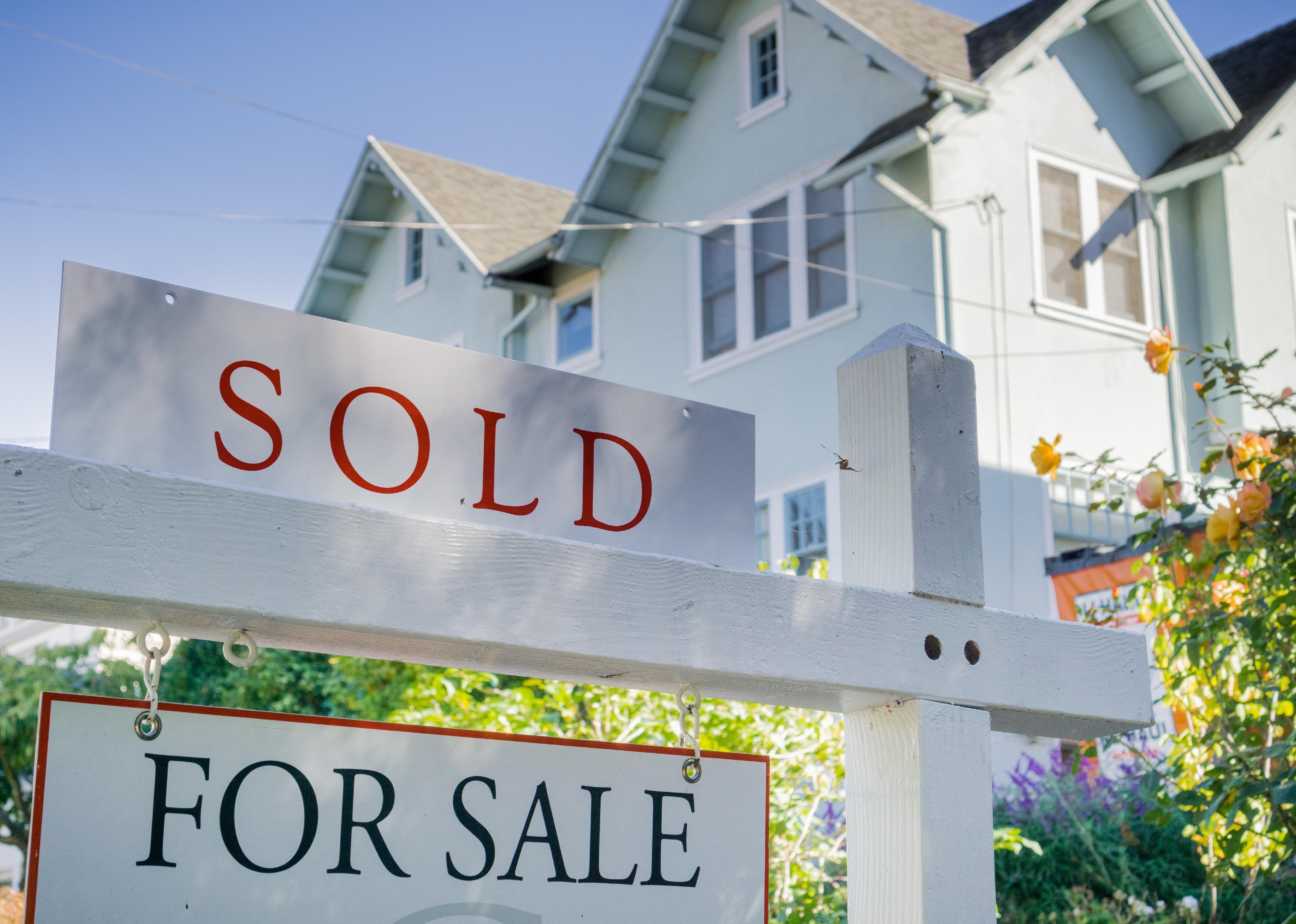 In the U.S., many took advantage of the remote work revolution and left behind expensive, crowded urban centers for the suburbs.

A rapid rise in the price of everything from homes to fuel and food forced central bankers to take action to curb inflation. The Federal Reserve began raising its benchmark rate roughly a month after Canada and has taken a less aggressive approach to interest rate hikes. Since April, the Fed has announced four rate increases.

In the U.S., experts are indicating that a housing market crash similar to the one that started in 2008 was unlikely. Stringent regulations have been put in place to prevent the questionable lending practices that were widely adopted to approve lower-income buyers for mortgages two decades ago. 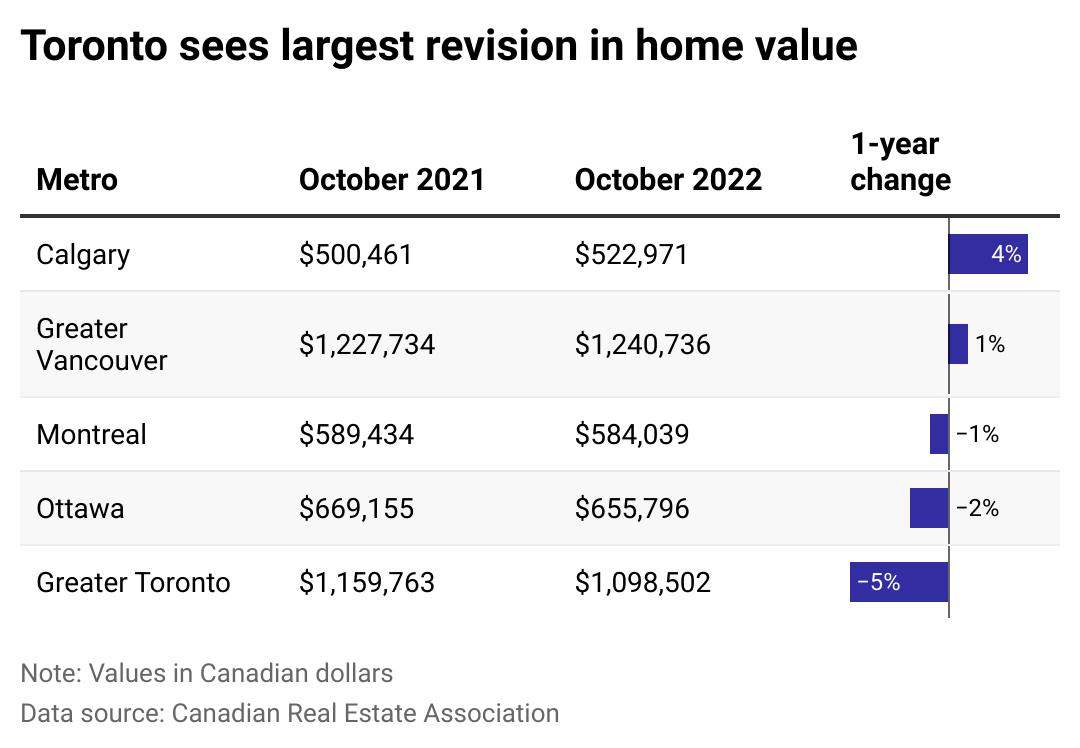 In November, the Canadian Real Estate Association said that the average price of a Canadian home had fallen $170,000 since February.

Major housing markets are beginning to see values come down with the biggest declines in Toronto. In Calgary, though, home prices remain elevated compared to levels seen at the same time a year ago. That's because of continued strong demand due to high migration rates and robust job growth compared with other Canadian markets, according to the Calgary Real Estate Board's chief economist. 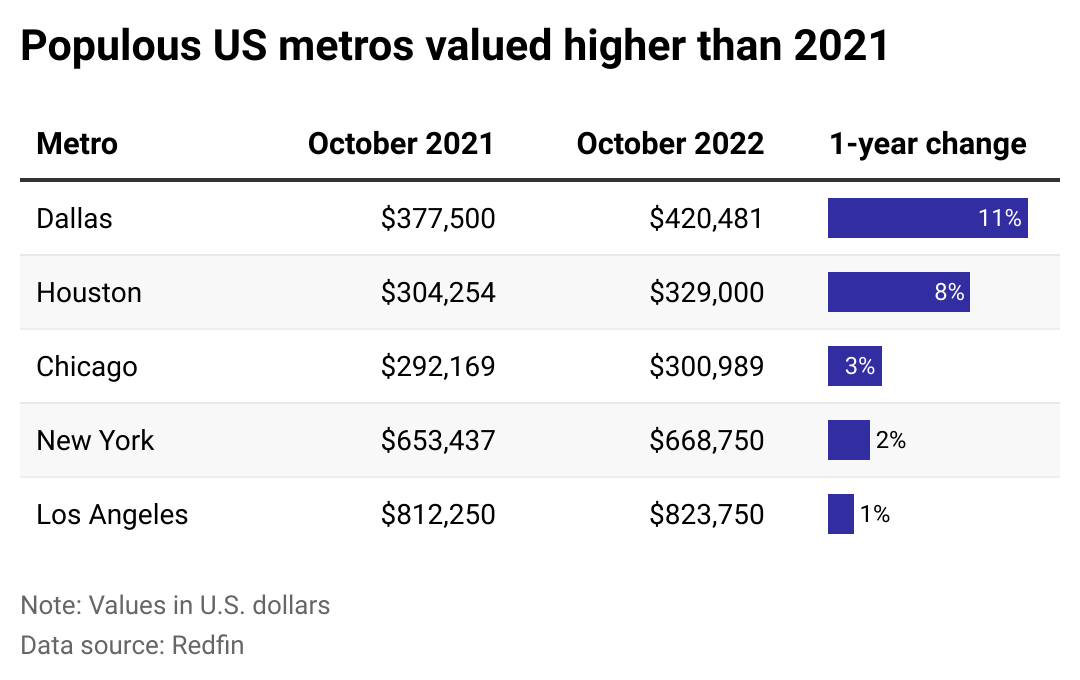 Home price data suggests that the U.S.'s most populous housing markets are correcting downward at a slower pace than their Canadian counterparts. In all five of the most populous metropolitan areas in the U.S., average home prices increased year over year. Though the pace of increase is slower, continued growth in the country's biggest markets shows that the real estate market continues to increase in value.

Is it a crash or a correction?

Central bank leaders have one powerful tool to prevent inflation from getting out of control: interest rates. By increasing interest rates, they make it more expensive for businesses and consumers to borrow money for mortgages, vehicles, and credit card spending. Its ripple effect through the economy causes drops in purchases for everyday items like groceries to big-ticket items like homes. The economy slows as businesses see drops in sales and profits, which can lead to layoffs and other financial losses.

Thus far, rate hikes forced the Canadian housing market into a slump; by this time next year, homes could lose a quarter of their value on average across the country, according to economists.

Meanwhile, Florida Atlantic University released a report this month showing that home prices in the hottest U.S. markets, including Boise, Idaho, and Austin, Texas, are already falling. Forecasts suggest more populous metros like Houston and New York City will be the next dominos to fall and that more than half of all major U.S. metros will soon experience declining home values. This trend could continue through 2023.

"I doubt we'll see anything close to the downturns that occurred 15 years ago," Ken H. Johnson, an economist at FAU's College of Business, said in November.

This story originally appeared on Calgary.com and was produced and distributed in partnership with Stacker Studio.