Velotric analyzed data from WalkScore.com and Redfin to determine the most bike-friendly neighborhoods in the top 10 most bikeable cities and how much it costs to buy homes in them. 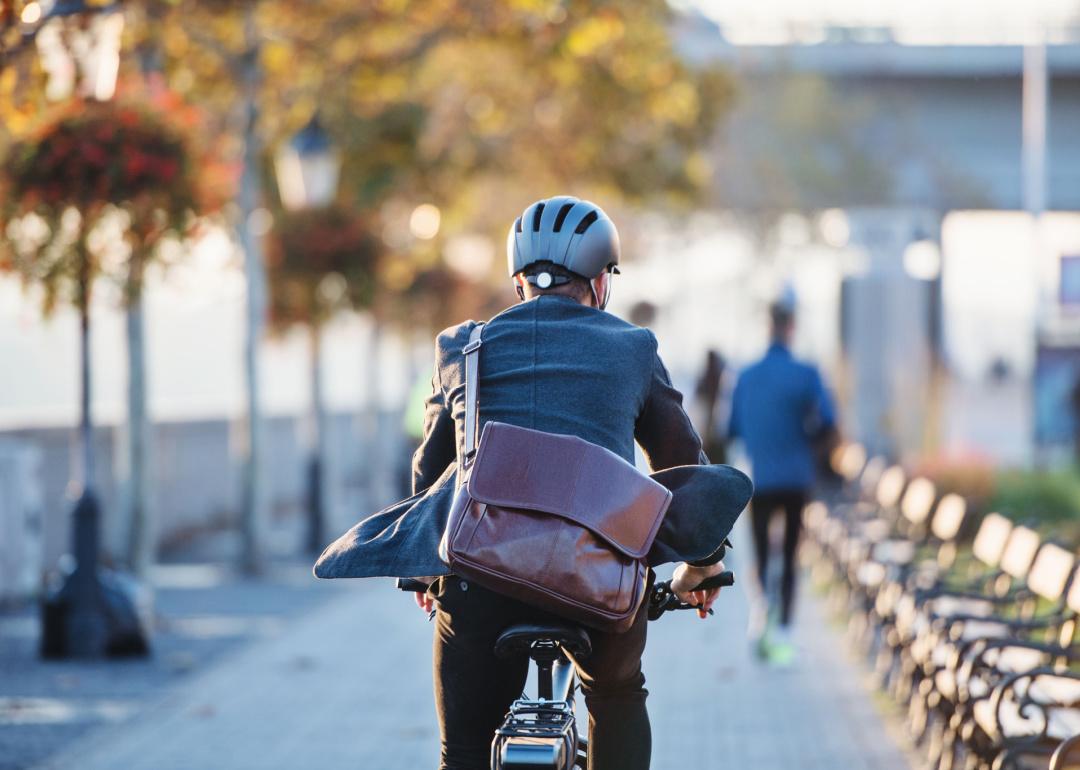 While bicycling has been a common pastime, mode of exercise, and transportation method in the U.S. for decades, its popularity skyrocketed during COVID-19. In fact, Americans spent over $1 billion more on bikes and bike accessories in 2021—when pandemic-related lockdowns were in full swing—than they did in 2020. The U.S. also imported about 70% more electric bikes in 2021 than it did in 2020.

It's easy to understand why: Biking is an activity that can be done outside and away from others, giving many otherwise-cooped-up people a way to exercise and leave their homes in a relatively safe way. This fact was not lost on local communities and governments trying to adapt to what would become, for a time, the "new normal." Many cities adopted a "Slow Streets" initiative, which aimed to slow the speed of vehicles on popular streets to make them safer for cyclists and pedestrians. But the initiative, which no doubt made a few communities at least somewhat more bike-friendly, was only meant to be temporary.

That aside, some cities have prioritized bike friendliness on a more permanent level by improving—or starting the process to improve—infrastructure for cyclists, including bike lanes. The most friendly cities for pedestrians and cyclists tend to attract bike enthusiasts and commuters who are able to afford the premium housing costs that often go along with living in them; however, the most bikeable neighborhoods within those cities are not necessarily the most expensive, as the following list will show.

Velotric analyzed data from WalkScore.com to identify the top 10 most bikeable cities as well as the highest-ranked neighborhoods for cyclists within those cities. Walkscore.com's bike scores take into account the presence of bike-friendly infrastructure, the number and steepness of hills, the distance between a variety of amenities and destinations, and the number of people who commute by bike in a given area. Using Redfin median home sales data, this analysis also shows how much it would cost to buy a house in these neighborhoods compared to their respective cities overall. Cities are listed from lowest to highest median home price. 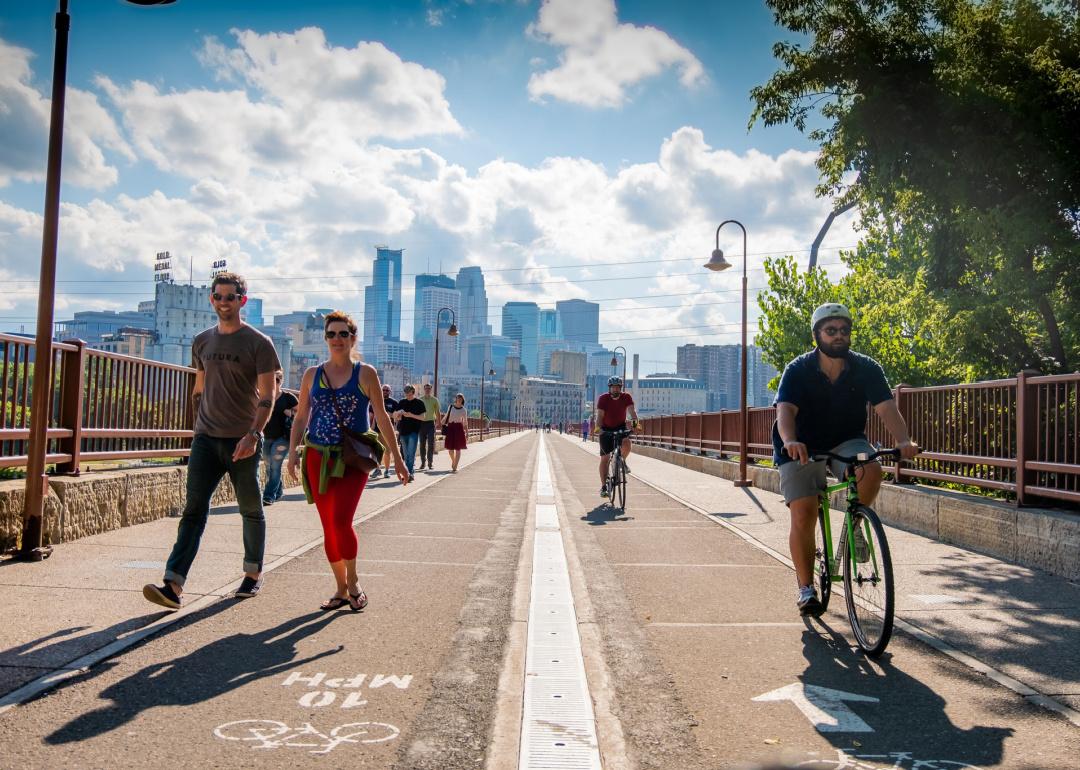 The Seward neighborhood of Minneapolis, located on the western side of the Mississippi River, is largely residential. It is home to a number of parks and miles of biking trails, many of which are part of the "Grand Rounds Scenic Byway"—a 51-mile loop that passes through or near some of the must-see sights and attractions Minneapolis has to offer.

The neighborhood also provides a network of bicycle lanes on local streets. In addition to being bike-friendly, Seward's light rail and bus service connect it to downtown Minneapolis and the University of Minnesota. Its median home prices are also below those of Minneapolis as a whole. 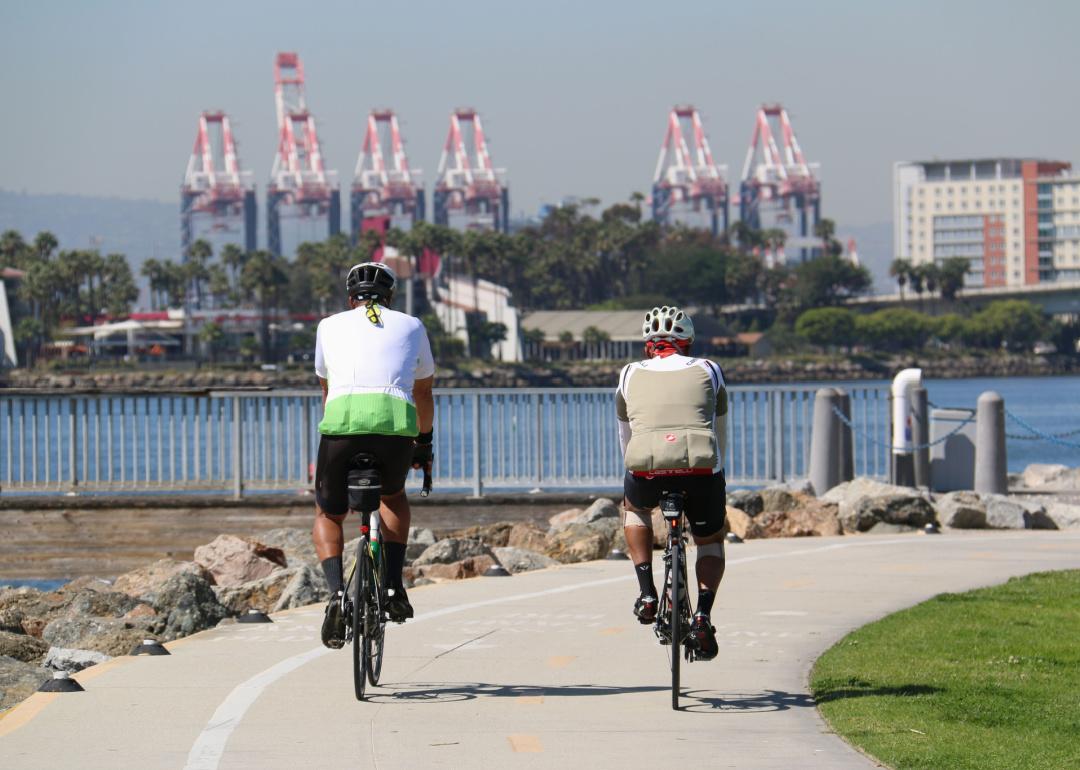 Long Beach, California, has more than just year-round great weather and a kind of hipster vibe going for it. The city has been recognized as a Bicycle Friendly Community by the League of American Bicyclists. The city has bike-friendly infrastructure and bike-share programs, and hosts events to promote cycling. The primarily residential Franklin neighborhood boasts access to bike lanes and bike paths, and median home prices there are significantly less than Long Beach's overall. 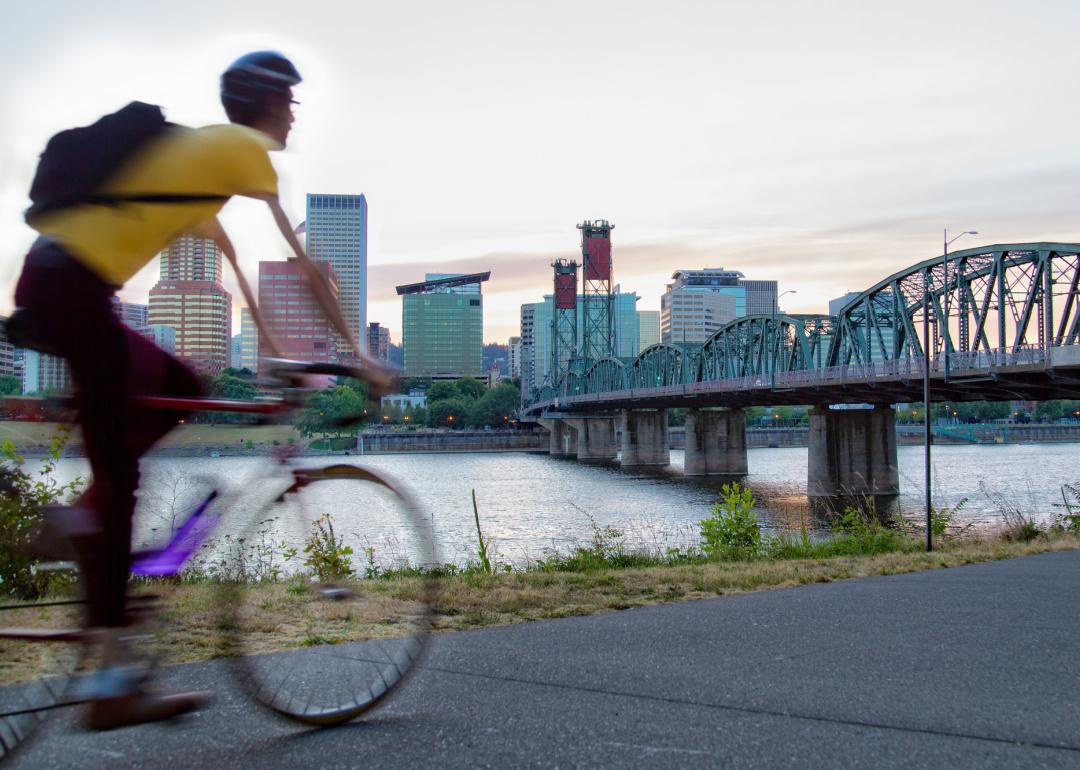 The city of Portland is home to hundreds of miles of bikeways, cyclist-specific traffic signals, and a robust e-bike-share program. With getting around on two wheels being so easy, it's no surprise that thousands of people regularly commute by bike—including those from the Humboldt neighborhood.

Humboldt, home to one of Portland Community College's campuses, is considered a vibrant and "hip" neighborhood. College students and young professionals take advantage of the myriad bars, shops, parks, and of course, bike paths. Housing in Humboldt tends to be pricier than in Portland overall. 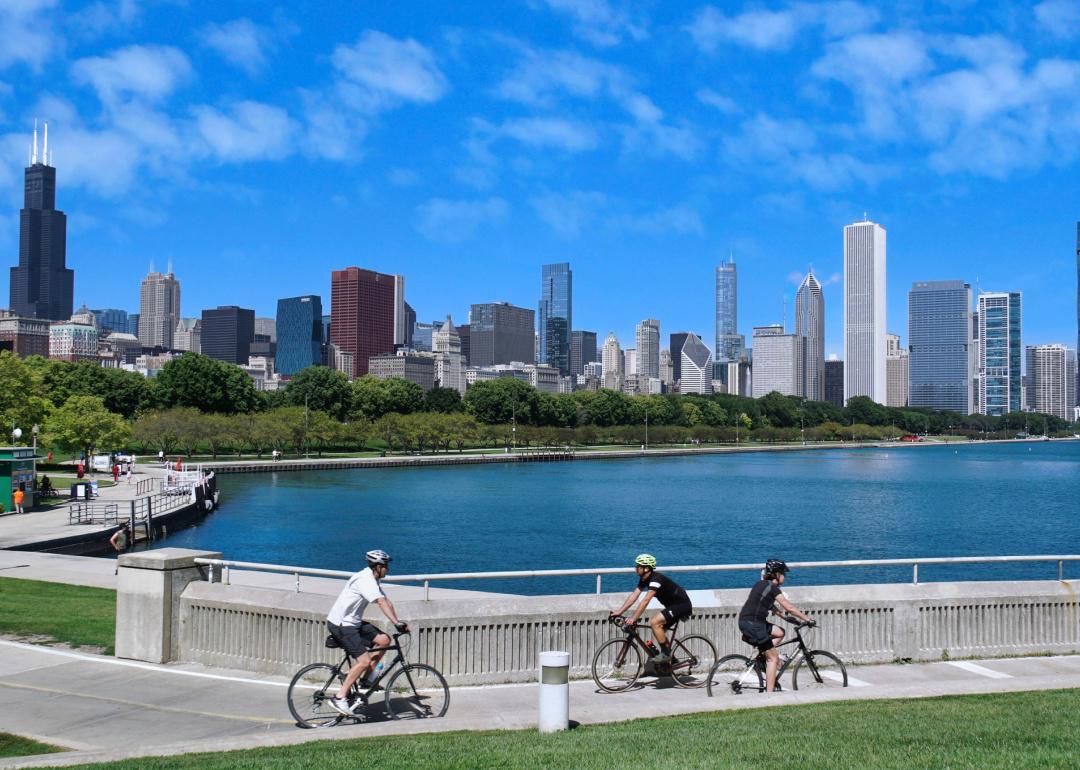 The Windy City is on top of its game in terms of bike-friendliness. In addition to investing in protected bike lanes, the city plans to upgrade and expand those lanes by the end of 2023. It also offers bike-share programs and free biking classes.

East Ukrainian Village, also called East Village, is a small, historic neighborhood that not only has high walk- and bikeability scores, but also has excellent public transportation options, making it an ideal home base for carless commuters. The neighborhood has historic charm and is also considered trendy with an eclectic mix of theaters, eateries, and bars. 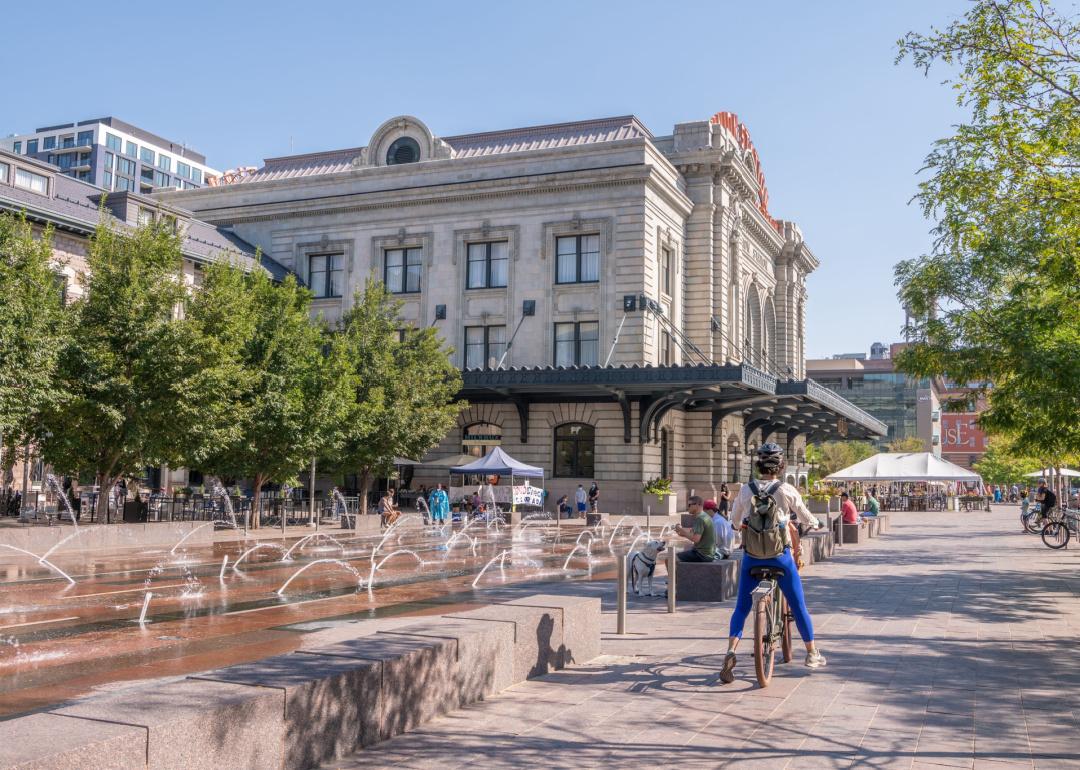 Nestled into the Rocky Mountains, Denver has nearly 200 miles of bike lanes and as part of the Denver Moves Plan—which aims to improve transportation in a variety of ways by 2050—is in the process of adding 270 miles of biking solutions, from bikeways to separated bike lanes.

The Five Points neighborhood, one of the city's oldest, is often called the "Harlem of the West" since it served as a frequent stop for jazz musicians like Miles Davis and Billie Holiday. While there are some bike lanes in Five Points already, the neighborhood is expected to add more of them by next year. Living in this arty neighborhood will cost you a little more than Denver's median home price average. 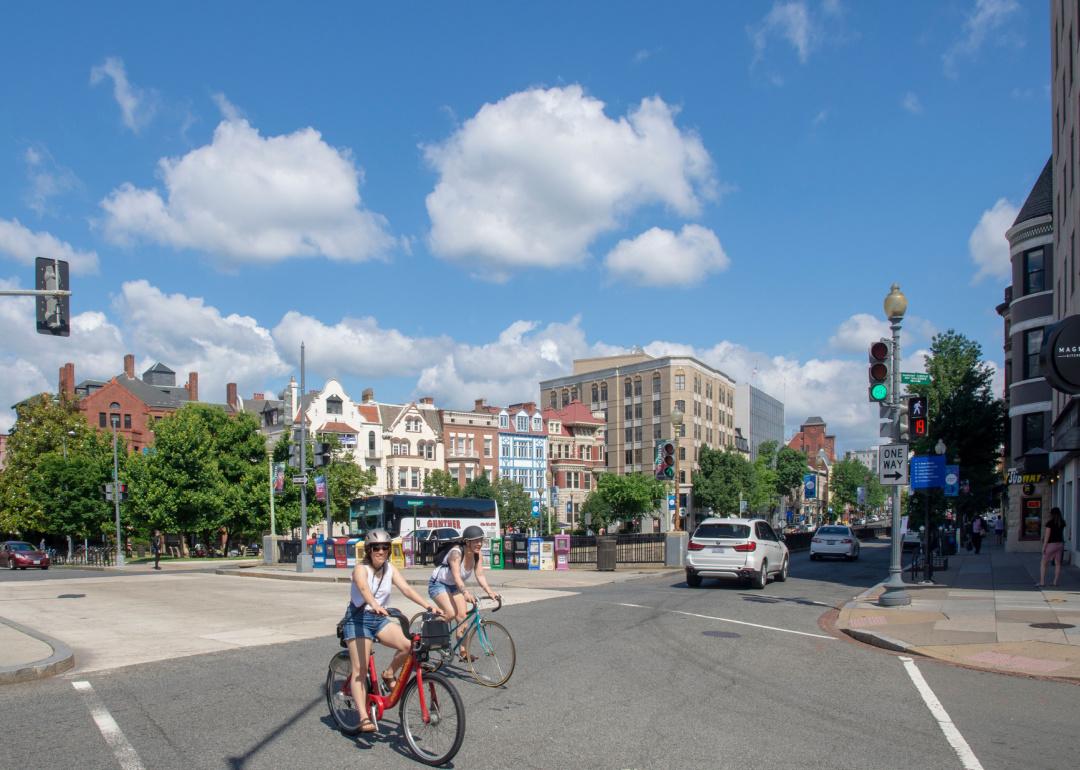 Washington D.C. has 150 miles of bike trails and bike lanes. The nation's capital offers a robust bike-share program and is promoting an initiative to get 10% of commuters to bike to work by 2032. The U-Street neighborhood is steeped in history and was once considered "the heart of Black Culture in America," according to Destination D.C.

Once a hot spot for jazz music and civil rights protests, the neighborhood is now a vibrant place for music, food, and culture. Many people commute to and from U-Street by bike, and the city has plans to add a north-south protected bike lane to improve the neighborhood's connection to downtown and existing east-west bike lanes and paths. 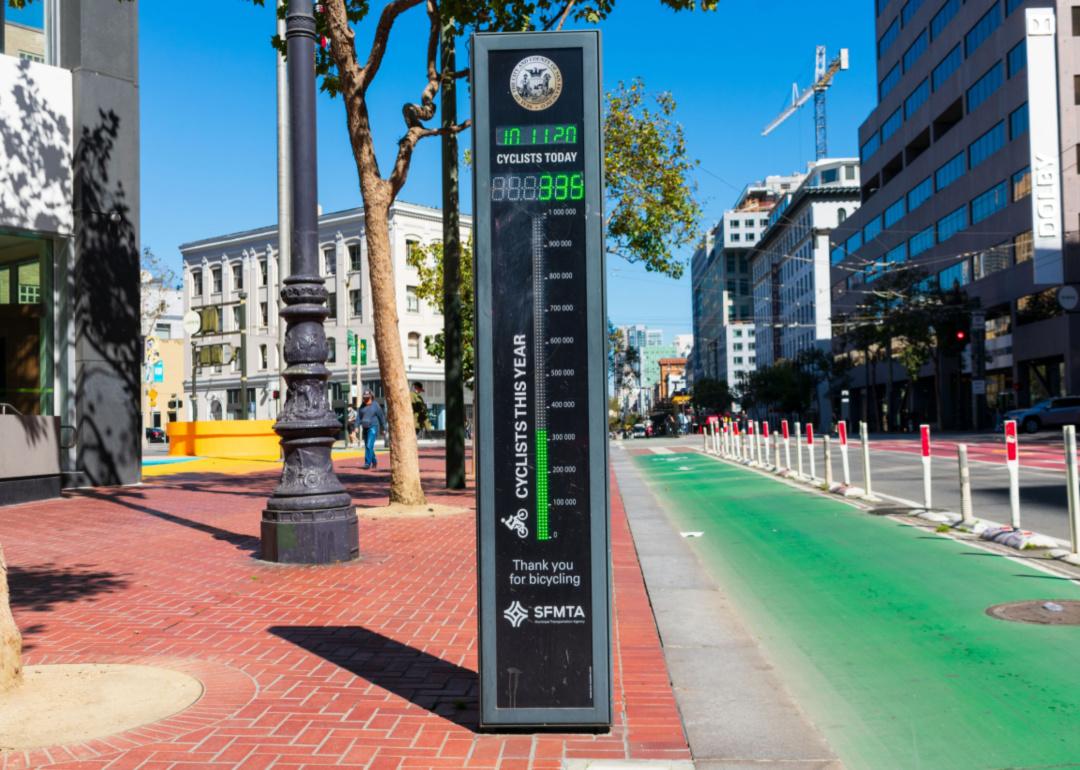 Despite its hills and winding streets, San Francisco is bustling with cyclists. In addition to a bikeway network of more than 460 miles, the Golden City added 1,624 new bike racks between 2020 and 2021, exponentially boosting the number of safe places for bike commuters to secure their ride. Its bike-share program also has an average of more than 3,500 bikes available between 11:00 a.m. and 3:00 p.m.

The Civic Center neighborhood is near downtown. In addition to being home to City Hall, this neighborhood is known for its wide array of performing arts options—from ballet performances to symphonies and beyond. Cyclists can ride bike lanes and bikeways from Civic Center to almost any neighborhood; it also has a bike parking and repair area at its metro station. Although median home prices in the Bay Area are high in general, Civic Center homes tend to be more affordable than the city's average. 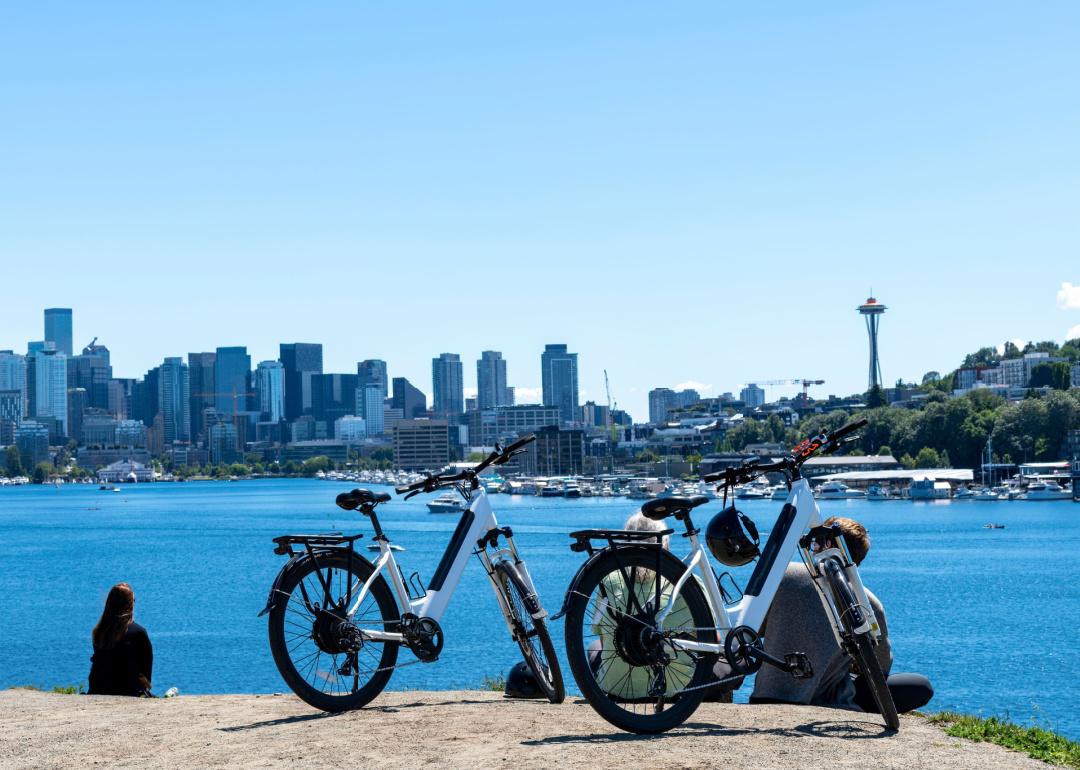 Through its bike program and Bicycle Master Plan (launched in 2021), Seattle is investing in projects to make bicycling a mainstream form of transportation for all ability levels. This includes the creation of bike trails, protected bicycle lanes, and neighborhood greenways as well as the addition of bike racks.

The Ballard neighborhood, one of Seattle's oldest, sits adjacent to the Ballard Locks—making it an ideal place to watch boats come and go and to eat seafood. Ballard is also home to the city's National Nordic Museum and is connected to other parts of the city by various bike lanes and trails, including the Burke-Gilman Trail—which is one of the city's best-known bike paths. Median home prices in this neighborhood are higher than the city's average. The city of Irvine in California's Orange County has more than 285 miles of on-street bikeways in addition to an off-street system comprised of over 110 miles of trails. The city promotes the use of this bike-friendly infrastructure for recreational and commuting purposes.

The city of Arlington, just outside of Washington D.C., funds a variety of projects aimed at improving pedestrian and biking infrastructure through its Bike Arlington program. The program funds bike lanes, bike racks, renovations for existing trails, and safety initiatives.

In the Ashton Heights neighborhood—which doesn't have its own public transit metro stop—many people opt to commute or run errands by bike. Its proximity to the nation's capital also enables its residents to take advantage of the Capital Bikeshare program; however, as nice as Ashton Heights' tree-lined streets may be, they come at a price: Median home prices in the neighborhood are hundreds of thousands of dollars higher than the city's overall average.

This story originally appeared on Velotric and was produced and distributed in partnership with Stacker Studio.