Does your area have a high homeowner or rental vacancy rate? This is what data shows

NashvillesMLS.com analyzed Census Bureau data to find the regions and states with the most empty homes for sale and for rent in the third quarter of 2022. 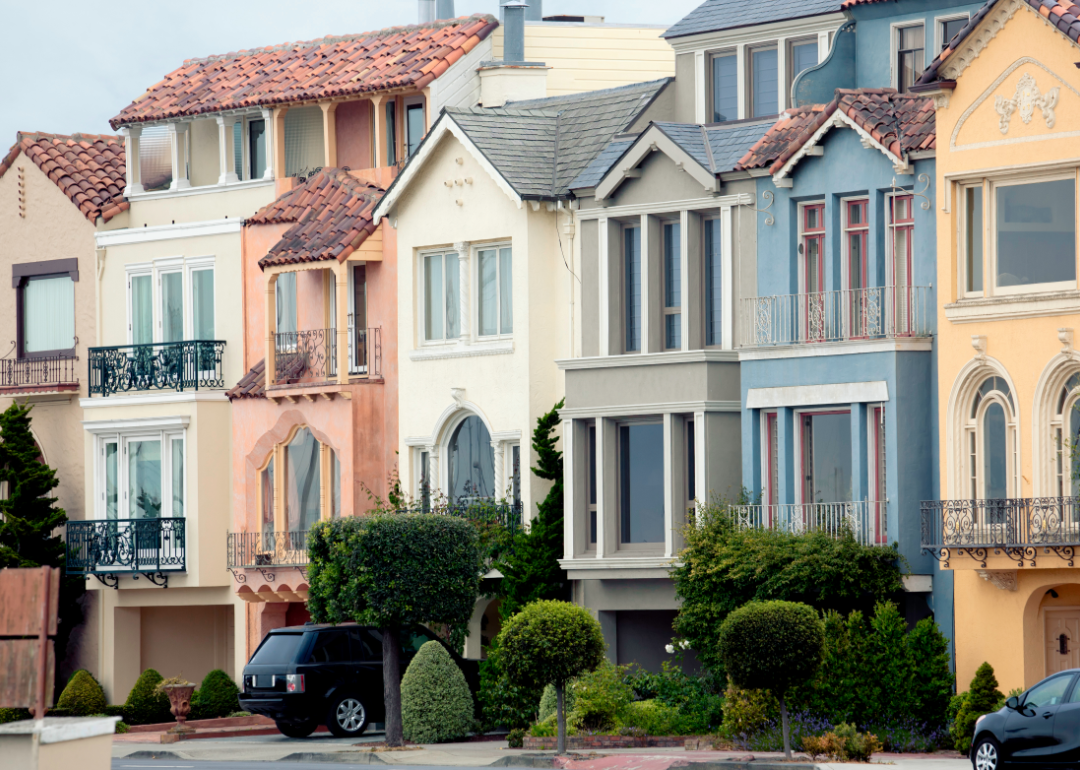 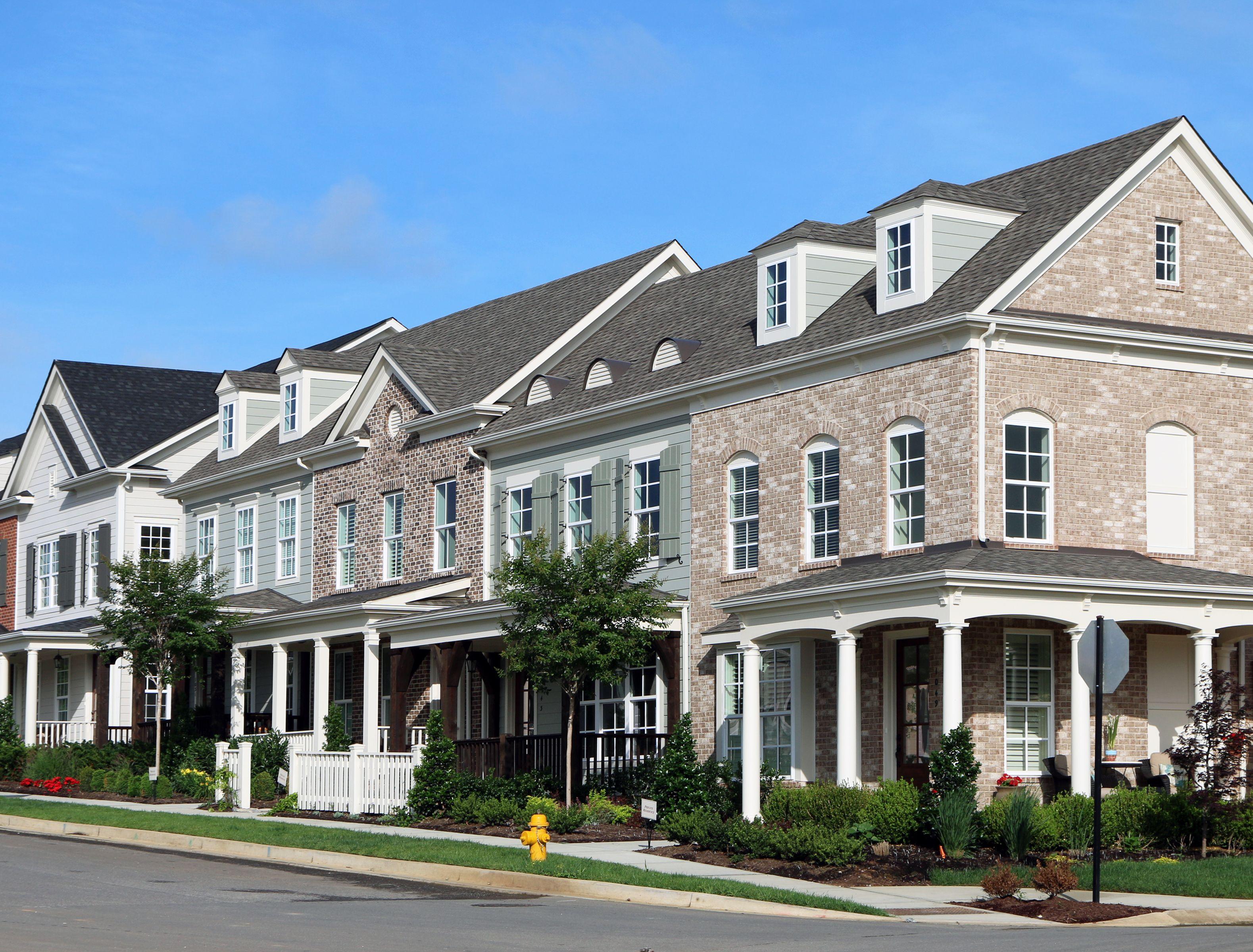 With the real estate market cooling off in many places, home buyers and renters may hope to score deals. One indicator of the potential for price changes is an area's vacancy rate.

NashvillesMLS.com examined the latest data from the Census Bureau's Housing Vacancies and Homeownership survey to find which regions and states have the largest shares of empty homes for sale and for rent in the third quarter of 2022, the latest data available.

The national homeowner vacancy rate remained near record lows during the third quarter, coming in at 0.9%. In more typical years, that rate would be between 1.5% and 2%. Rental vacancies were at 6%, which is in line with a typical rental market.

The South has the highest rates of rental and homeowner vacancies—and less of a home shortage—largely because of robust pre-pandemic development compared to the rest of the U.S. 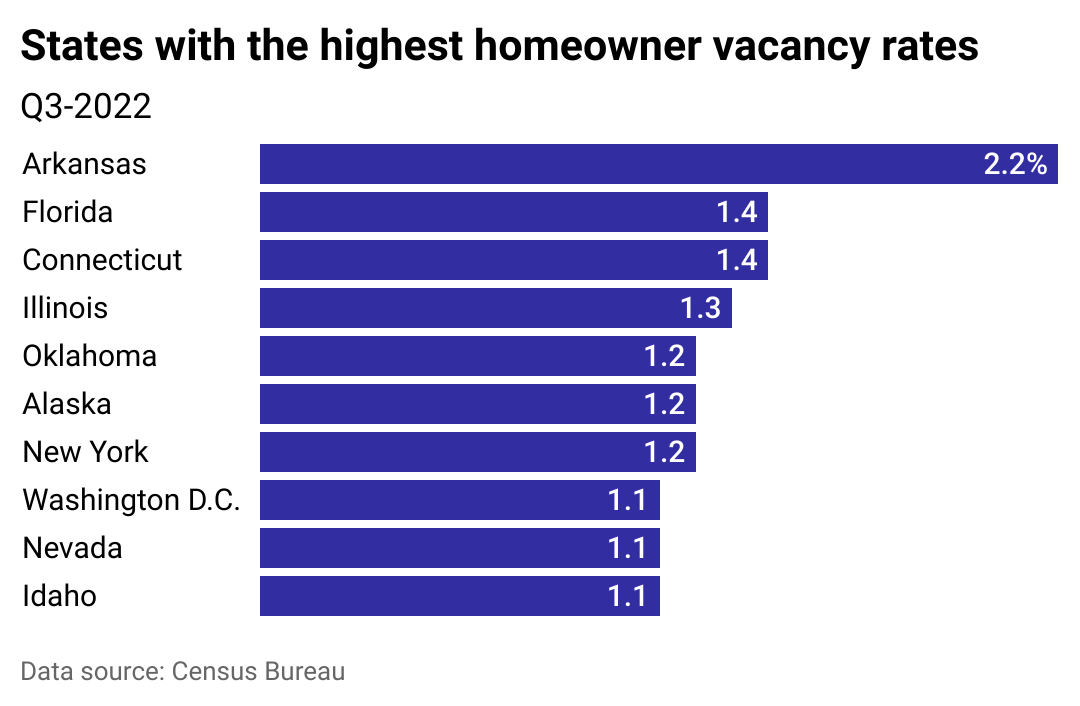 No specific area of the country is particularly prone to high homeowner vacancy rates. In fact, even though these states are ranked "highest," their vacancy rates are still considered to be low compared to the amount of housing that's needed throughout the country.

The stable vacancy rate for homeowners is typically at 2%. If the vacancy rate hits above that, that's a sign there's not as much demand to buy homes. If it's below that mark, there's not enough inventory on the market to satisfy homebuyer demand.

Homeowner vacancy in the Northeast 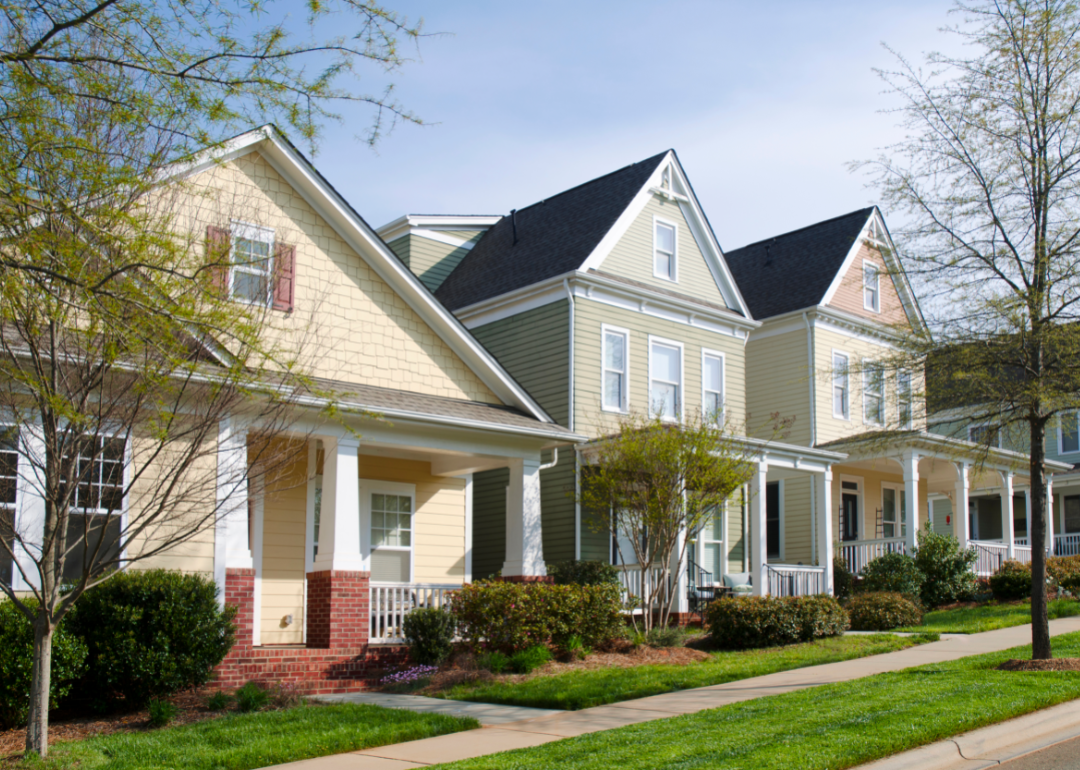 In some areas of Connecticut, housing inventory is rising—though not quite to a normal level.

Real estate agents calculate the estimated time it will take properties to sell by looking at vacancy rates alongside the rates at which listed properties are selling. Earlier this year, the Connecticut market had just weeks of home inventory but is now returning to months of inventory.

Many elements of Pennsylvania's market are also down, including listings, sales, and inventory. Inventory was down to 3.07 months in October 2022, a 16.4% drop year over year. This represents about half of what experts say is a balanced market, according to the Pennsylvania Association of Realtors.

Many people leaving New York City during the pandemic relocated upstate, providing a real estate boon to many communities that had struggling local economies.

Homeowner vacancy in the Midwest 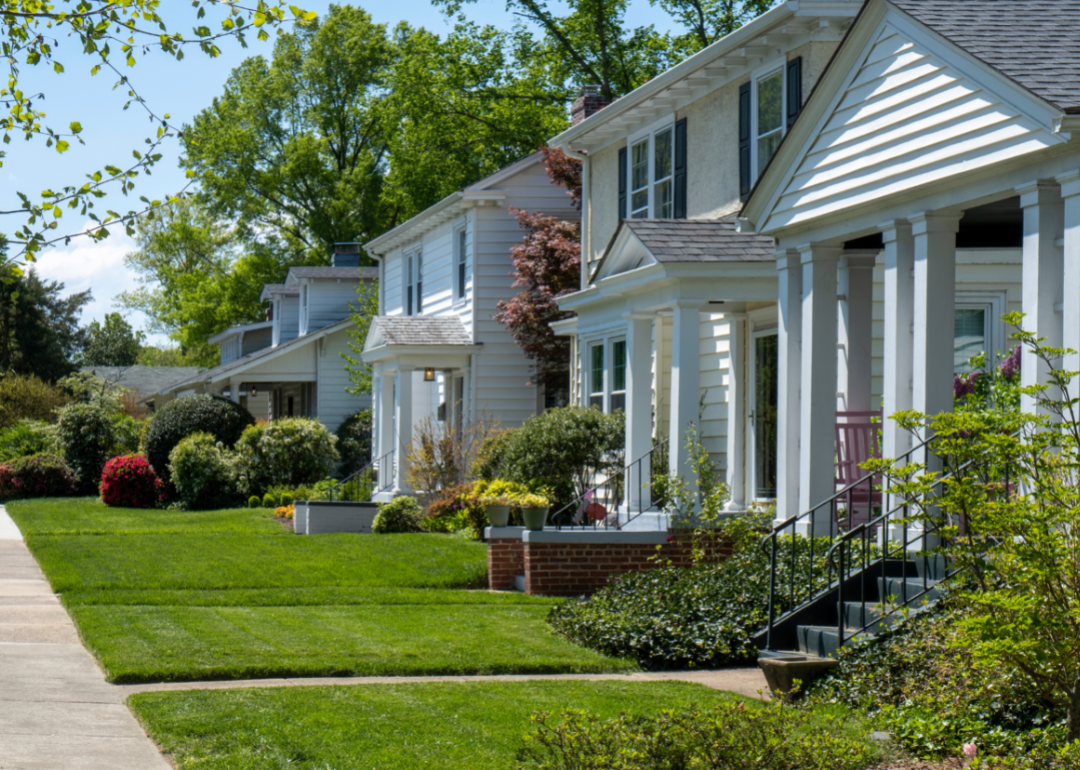 Illinois' population has dropped annually for the last eight years. From July 2020 to July 2021, it lost nearly 1% of its population, the second-highest decline in the country. Many people have left the state due to high taxes and cheaper housing elsewhere.

Minnesota is seeing an increase in inventory—2 months in October 2022 compared to 1.6 months a year earlier—even though the number of new listings declined about 19%, which signals properties are spending longer on the market.

In Missouri, the number of listings has steadily increased this year, according to Missouri Realtors. Meanwhile, the number of homes sold in October 2022 has declined 26% to 6,320 compared to the same time period a year ago.

Homeowner vacancy in the South 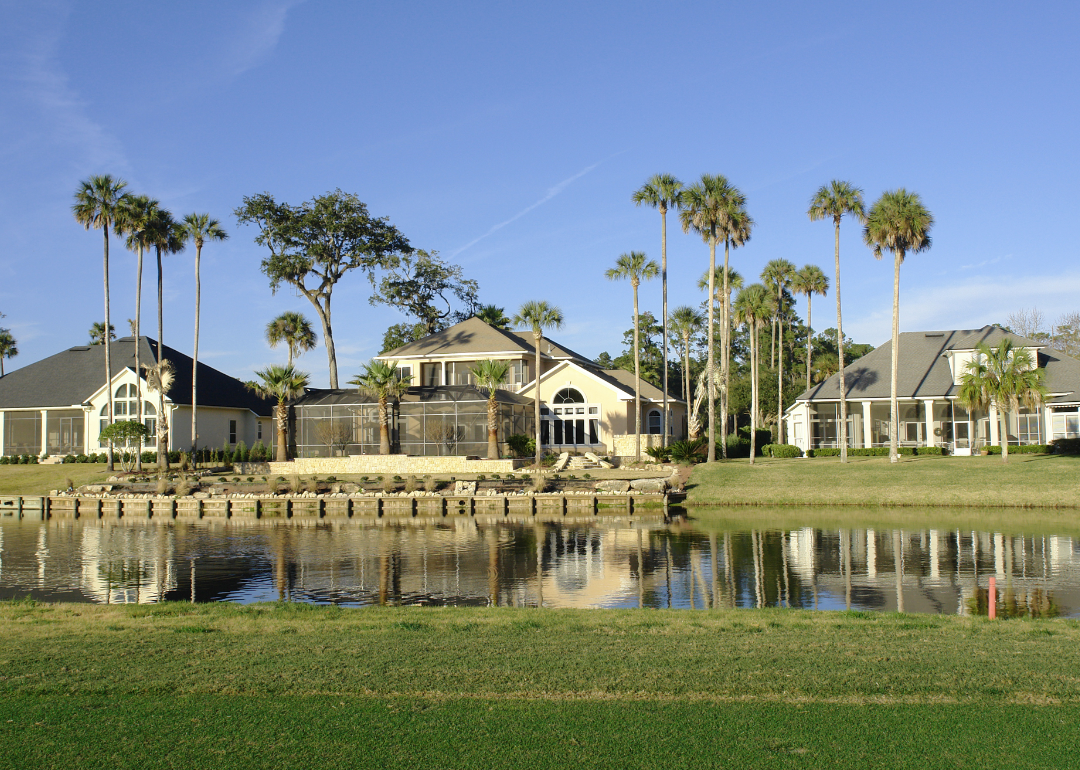 More new construction is happening in the South than any other place in the U.S. This region accounts for 54% of all new housing units that have broken ground in 2022, and 70% of those new units are single family homes, according to the Census Bureau.

Building in the South can be prone to disruption from intense weather like hurricanes, flooding, and tornadoes, but 2022 has been relatively kind to the construction industry. Hurricane Ian, a major category 4 storm, had less of an effect on new construction in Florida than what was predicted.

In the Oklahoma City area, new construction has picked up: 5,535 permits were issued between January and October 2022, an increase of 8% over the same time period the year prior.

Homeowner vacancy in the West 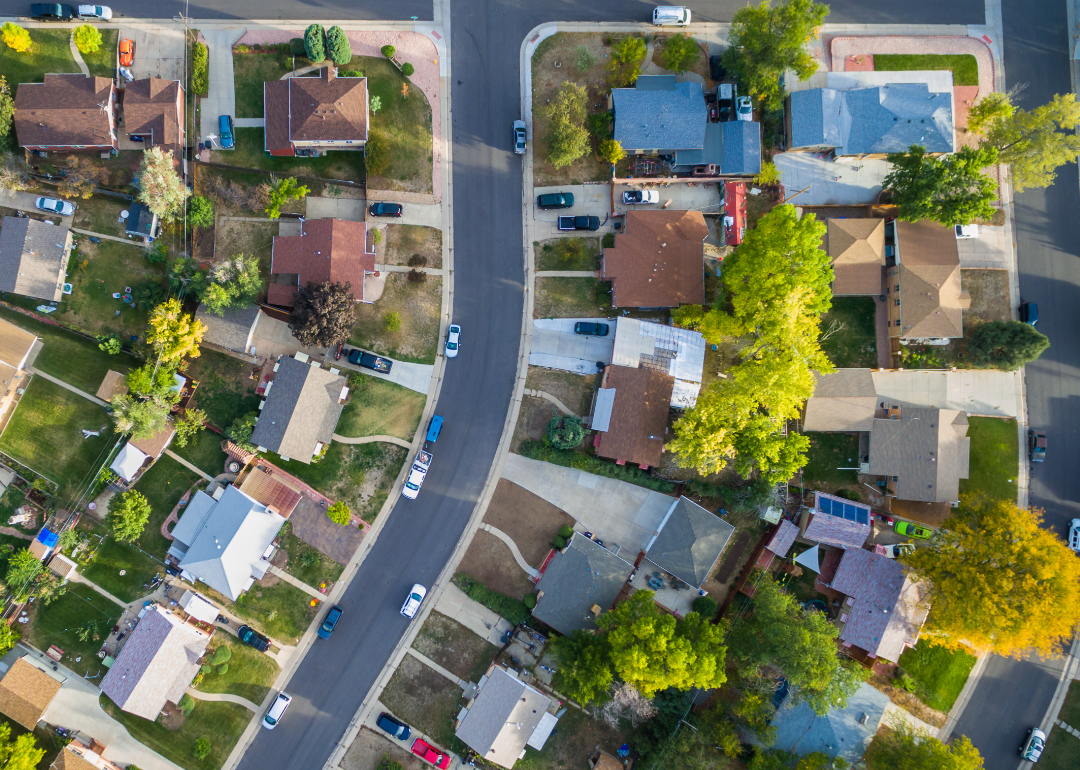 The Western region of the U.S. has the lowest vacancy rate in the country, indicating that even states with regionally high vacancy rates still don't have many vacant homes compared to other regions. In Alaska, Anchorage and Juneau's housing markets were both so tight in 2021 that five homes sold for every two listings.

Over the last five years, Idaho's vacancy rate during the third quarter has been typically higher than in other quarters. In 2022 its rate was more in line with pre-pandemic times. Nevada's vacancy rates are also starting to inch toward pre-pandemic levels. 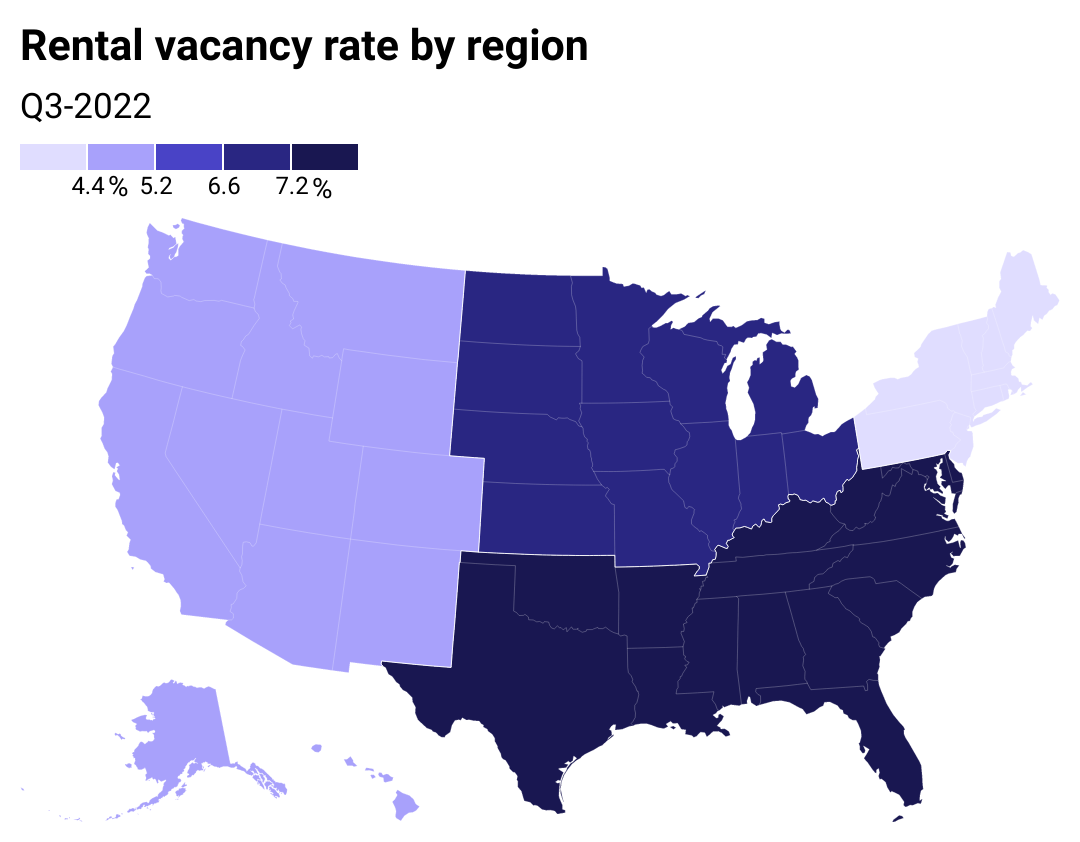 Unlike in the housing market, the rental market doesn't usually see prices drop when vacancy rates are high. In many cases, vacancy rates affect the speed of increases, rather than actual amounts, according to research by Strong Towns. In years where the vacancy rate is low, the rents tend to go up more quickly. When the vacancy rate is high, rents could go down but are more likely to climb more slowly. Landlords may also throw in perks to maintain a certain rental price, and make price concessions to increase the attractiveness of their property.

Rental vacancy in the Northeast Rhode Island may have the highest rental vacancy rate in the Northeast, but this entire region suffers from a lack of rental housing. Rhode Island's rate of multifamily construction declined from the last quarter of 2021 through mid-2022. This has put pressure on rental prices, causing them to spike in many cities throughout the state.

In New York, vacancy rates may be high for the region, but the third quarter of 2022 had the state's lowest vacancy rate since the initial pandemic lockdown in 2020.

Central Pennsylvania has become a really competitive market for rentals—in 2022 Harrisburg was named the 2nd most competitive rental market in the country, according to RentCafe. Suburban Philadelphia ranked 17th.

Rental vacancy in the Midwest 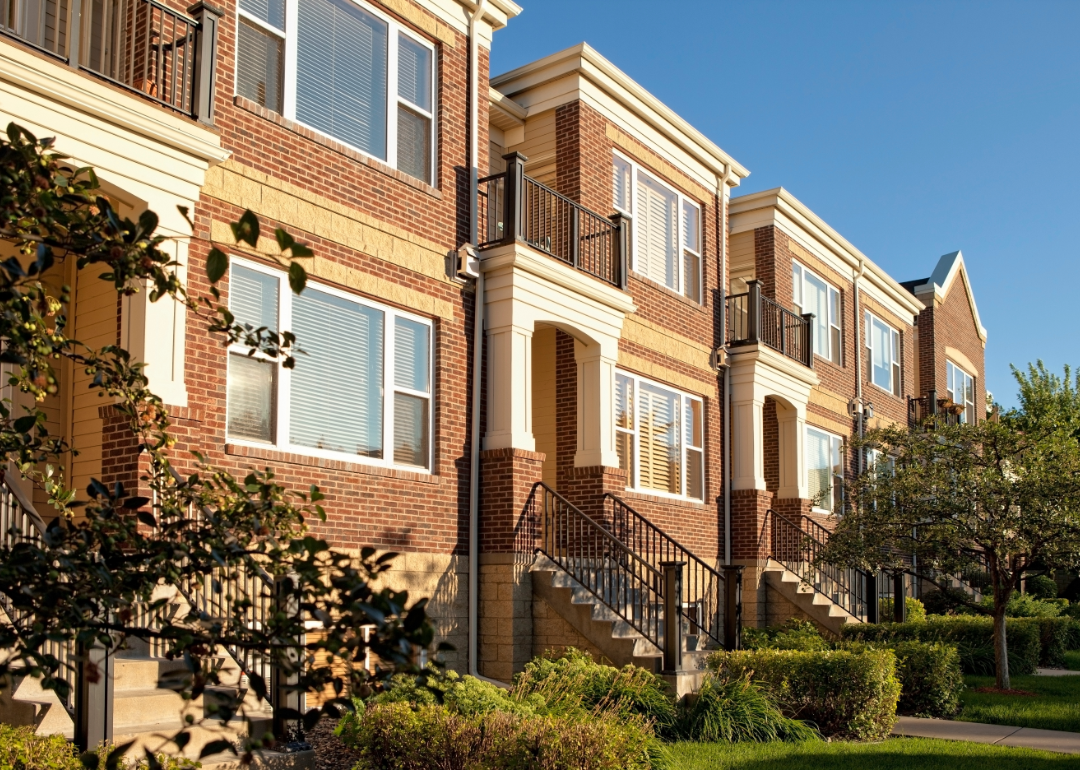 Rental vacancy in the South 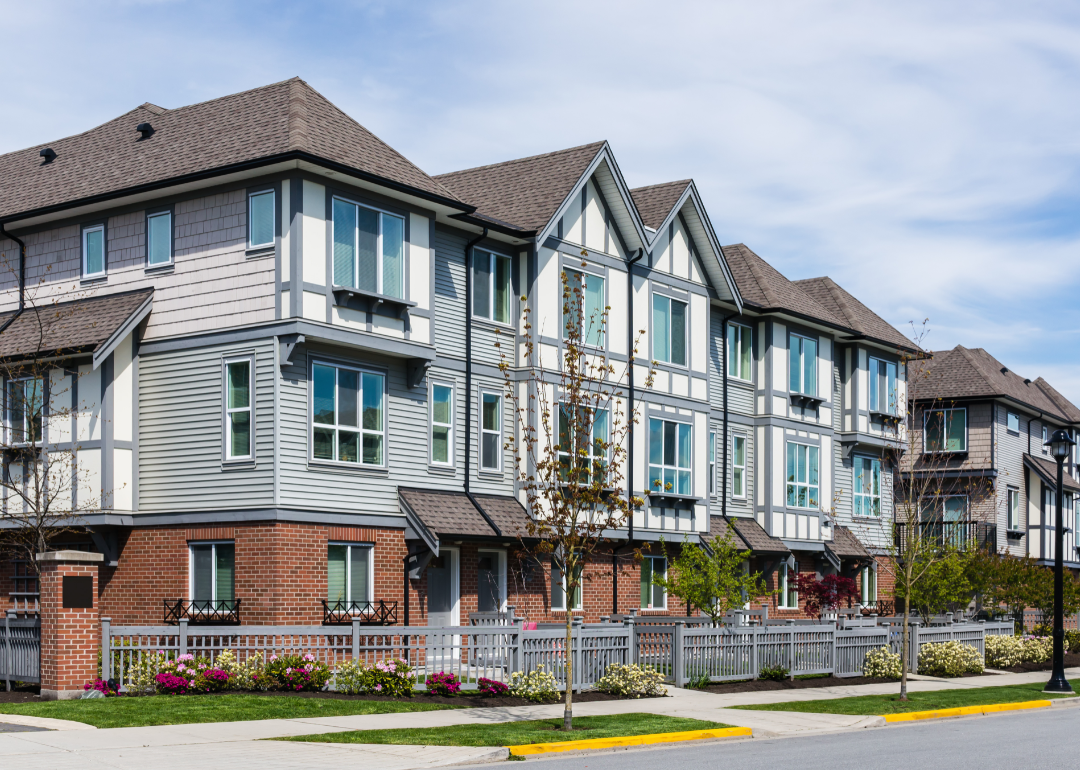 The South's rental vacancy rate is the highest in the country at 7.3%. That's in part due to more construction of rental units across the region. Arkansas has the highest vacancy rate in the nation, according to the Census Bureau, and hit double digits for the first time since 2019.

Alabama's vacancy rate ranks 5th in the nation, although the market is still tight, as rents throughout the state increased 13% from 2021.

In Oklahoma City, rents were low through the pandemic, but now they are on the rise, increasing by nearly 32%.

Rental vacancy in the West

Hawaii's vacancy rate has crept up in 2022 from 6.1% in the first quarter. Rents are also increasing on Oahu, due to increased construction costs, which has limited supply.

In Wyoming, vacancy rates are low compared to double-digit rates of five years ago. Rental housing is still needed though, with Cheyenne alone short 8,401 units.

Alaska's vacancy rate is high for the region, but it has actually experienced a sharp decline from a decade high of nearly 10% in 2020. Renters are tending to stay put rather than buying into a higher priced home sales market, and there has been a steady decline in multifamily home construction since 2014.

This story originally appeared on NashvillesMLS.com and was produced and distributed in partnership with Stacker Studio.